Part 2 of The Adaptation Watch focuses on the contemporary stories coming to the big screen and streaming in 2020.

The Outsider – release date January 12, 2020 on HBO; starring Ben Mendelsohn, Cynthia Erivo, and Jason Bateman. Based on the Stephen King novel of the same name, this series will serve up what we’ve come to expect from a King adaptation – thriller mixed with an edge of supernatural in a remote location. 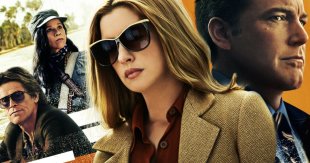 The Rhythm Section – release date January 31, 2020; starring Blake Lively and Jude Law. Mark Burnell’s own adaptation of his novel about a woman turning her grief into action against terrorism never gained traction at the box office and is already gone. Read the book instead.

Little Fires Everywhere – release date March 18, 2020 on Hulu; starring Reese Witherspoon and Kerry Washington and Joshua Jackson. Based on the novel by Celeste Ng, this highly anticipated series intertwines the lives and families of wealthy, white Elena (Witherspoon) and struggling artist Mia (Washington) before a fire burns down Elena’s house with her in it and leaves viewers guessing as to who the arson is.

I Know This Much Is True – release date April 27 on HBO; starring Mark Ruffalo, Melissa Leo, Juliette Lewis, and Kathryn Hahn. Based on Wally Lamb’s novel that was featured on Oprah’s Book Club, the limited release series showcases Ruffalo’s acting chops as he plays twin brothers Dominic and Thomas, the latter who suffers from schizophrenia.  This is a dark dive, grappling with heavy subjects like PTSD, mental illness, abuse, HIV, and family secrets.

Without Remorse – release date September 18, 2020; starring Michael B. Jordan and Jodie Turner Smith. Based on the Tom Clancy novel of the same name, Without Remorse is the first of two scheduled films with Jordan portraying CIA operative John Clark, who is as famous with Clancy fans as Jack Ryan.

Dune – release date December 2020; starring Timothee Chalamet, Zendaya, Rebecca Ferguson, along with tons of other Hollywood names you’d recognize. The 1965 Sci-Fi classic written by Frank Herbert has been adapted a couple times before with mixed results, but with Denis Villeneuve (Blade Runner 2049, Arrival) at the helm, fans of Dune may have the film they’ve been waiting half a century for.

The Devil All the Time – release date 2020; starring Tom Holland, Robert Pattison, Eliza Scanlen, and Bill Skarsgard. Based on the debut novel by Donald Ray Pollock, the film showcases the disturbing ensemble of characters and reveals how darkness can seep into all aspects of life.