It’s time to see what adaptations are coming up in 2020 – your Novel2Screen abridged list.

Yes, abridged because there are a LOT of books being adapted to films and limited release TV series this year, thanks to the content demand from numerous streaming services. I’ve got your list boiled down into three simple categories: The Classics, For The Kids, and your Best-sellers.

Let’s start with The Classics:

Holy cow there are a million adaptations of classic books hitting the screens this year.  It’s as if every production company decided they needed a film to toss up on streaming platforms and turned immediately to literature in the public domain.

The Turning – release date January 2020; starring Mackenzie Davis, Finn Wolfhard, and Brooklynn Prince. Based on the Henry James horror novella The Turn of the Screw, the film is an contemporary telling of the famous ghost story that set the stage for every haunted governess tale to come. 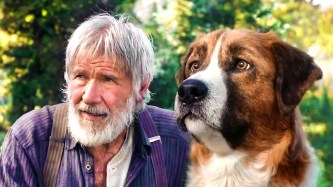 Call of the Wild – release date February 2020; starring Harrison Ford, Karen Gillan, and Dan Stevens. From the trailer, it looks to showcase what Harrison Ford does best – trying to avoid people.  The book is written from the POV of Buck, a dog, but the film seems to be the POV of John Thornton (Ford), so this maybe an adaptation that bucks the narrative some.  Yes, pun intended.

Emma – release date February 2020; starring Anya Taylor-Joy, Josh O’Connor, and Bill Nighy. Not sure we needed yet another adaptation as Clueless was perfect for my generation, but a new gen rises and from that comes a quirky retelling of the Austen classic.

The Invisible Man – release date February 2020; starring Elisabeth Moss and Oliver Jackson Cohen. This is a loose interpretation of the H.G. Wells classic of a scientist with a skewed moral compass that turns the story into a Lifetime female-driven thriller that we’ve seen a million times before.  But, who knows?  Elisabeth Moss is a brilliant actress and can probably lift any story up – even if she is acting to no one.

The Personal History of David Copperfield – release date May 2020; starring Dev Patel, Tilda Swinton, and Hugh Laurie. This is the first trailer that made me laugh and say, “I want to see this!” Where many Charles Dickens stories are full of the plight of the poor and frail children begging for scraps of food, this film is a playful spin on Victorian England.  Can’t wait!

The Pale Horse – release date March 2020 / Death on the Nile – release date October 2020; The former is a mini-series coming to Amazon Prime starring Rufus Sewell that actually looks interesting despite being an Agatha Christie story. Sorry, folks.  I’m not a fan of her stories that all seem to have the same set up and premise. But I also never read The Pale Horse.  The latter, a follow up to Kenneth Branagh’s Murder on the Orient Express. Another star-studded cast with the likes of Gal Gadot, Armie Hammer, Annette Benning, and Russel Brand.

Rebecca – release date 2020; starring Lily James, Armie Hammer, and Kristen Scott Thomas. I love this novel. I hate all the adaptations of it. Yes, especially the Laurence Olivier version that rewrote the ending because heaven forbid Olivier do something so dastardly! Perhaps Netflix can get it right?

These are the classics!  More will pop-up on my list for children adaptations coming soon, like Dr. Dolittle. And this doesn’t even touch on all the contemporary novel2screen works coming out in 2020.  Check back in for more!