I’ve stayed away from discussing Marvel movies on Novel2Screen.

Why? Because there are a million and one articles about Marvel movies.  Two, I’m not a comic book junkie.  If you want to read an in depth dissection of the movies compared to the comics, I’m not your girl.  Someone out there has done it better.  But I have to write about Captain Marvel.  I have to – because I was crying during the credits, shielding my eyes in my hoodie from my family. Why?  Because I’ve waited decades for this film.

A couple summers ago my girl friends and I got together to celebrate being women by going to see Wonder Woman.

I enjoyed the film.  Gal Gadot was perfect in the role. I loved the scene of her walking through the deadman’s zone between the trenches, deflecting bullets with her wrists.  Pretty freaking awesome.

But when the movie ended and all my friends chatted excitedly about how they waited for a film like this – a kickass female lead proving to little girls everywhere you don’t have to have a penis to be the center of an action flick, I nodded and kept my thoughts to myself.  Did I miss it? I thought.  I liked Wonder Woman, but it didn’t leave me with the “HELL YEAH!” emotions everyone else around me was feeling.   I kept my thoughts to myself, not wanting to rain on their feminist parade.

Also, I wanted that feeling.  I wanted that elation.  Fake it til you make it, right? Maybe I’d feel it the second time I saw it?  But I didn’t.  I didn’t even get past the battle on the beach because my young daughter hates fighting, unless it is with her older brother, and made me turn the movie off.

I dragged my daughter to Captain Marvel.

We all did.  Poor girl.  She’s a unicorn and rainbows soul growing up in a household of sci-fi freaks bred on Star Wars.  Before the movie started, I wanted to preemptively shift her focus from “OMGs, everyone is dying!! Who are those creepy people?!” to enjoying a film centered around a girl.  I leaned in and whispered for her to find joy in a movie all about a female hero. “We don’t get that often, sweetie.”

What I didn’t realize was those words were more for me than her.

Captain Marvel was everything I wanted Wonder Woman to be and so much more.  For starters, Carol Danvers is relatable. Wonder Woman is an Amazonian goddess, practically, born to fight. Carol is a female fighter pilot, grounded because women can’t fly in combat. Yes, she eventually is able to shoot photon fire from her palms, but I still relate to that.  Princess Leia was the only role model from movies I had growing up. She blasted stormtroopers and was snarky to Darth Vader and Tarkin. Spit and vinegar as my mom used to say. But she still couldn’t make a lightsaber fly into her hands using the force.  Therefore, I played the part of Luke as a kid.  But with Carol Danvers, I don’t need a sex change to be a hero.

Captain Marvel went further than Wonder Woman dared. My biggest pet peeve with Wonder Woman will remain the forced love story between Gal Gadot and Chris Pine.  They had little to no chemistry on screen as romantic interests.  They were fine as partners in crime, but that was one of the most awkward kisses in cinema history.  Why do filmmakers feel the need to thrust a love story in every female-driven movie?  As women, we are constantly told we aren’t complete without a man, which is no more truth than a man isn’t complete without a woman.  We’re separate people, whole individually.  It’s just easier together because when one is stuck in traffic you can call the other to go pick up the kids before you get a late fee from the after school program.  There is no love story in Captain Marvel.  Well, unless you count the one between Fury and Goose.  But none for Carol Danvers.  Thank you.  Thank you for letting a woman stand on her own with friends by her side – not a boyfriend. 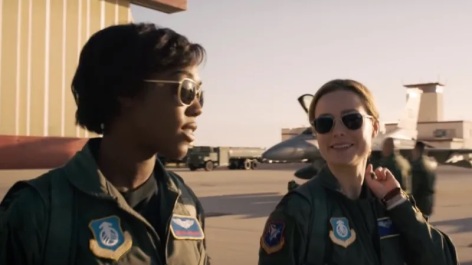 Yeah, this next topic doesn’t really apply to “faster,” but I didn’t want to mess up the whole “Higher. Further. Faster.” by titling the sections “Higher. Further. Fuck You.”  Don’t tell us to smile.  We aren’t here on earth to look pretty.  We aren’t here on earth to make others happy.  We have goals, dreams, agendas, and we’re here to do it.  A woman mentors Carol Danvers.  A woman is her best friend who joins the fight (and remains a friend, I must add; not “oh, since we are both girls in a film we must be catty at some point – I’m looking at you Whiskey Tango Foxtrot.) And it’s a man who forces himself in her (we’re talking blood here, so get that image out of your head) and manipulates her.  Nick Fury helps out, but he’s more the comic relief in this story and the one who messes shit up that Carol has to fix.  There is definitely an element of women have this, step aside, and stop fucking up the universe with your damn wars.  And no, she doesn’t need to smile more.

I don’t remember when the tears started. I remember thinking the end credit graphics were cool and I should stifle my sniffles before my family figured out I was crying. They may have started during I’m Just a Girl by No Doubt.  The sound track to the movie was brilliant.  I’m biased.  I was a teen during the 90s, so No Doubt and Garbage were on heavy rotation on my boom box.  OK, Garbage is still in my CD player in my car.  Most of the songs featured in the film were from female-led bands.  I appreciated that.  I appreciated a lot with Captain Marvel.  I finally had that feeling, what my friends had been talking about walking from the theater after watching Wonder Woman.   I finally got my film.  The one where I didn’t have to have a gender change to relate to the hero.  Because the hero I always wanted was a heroine.

Photos courtesy of Marvel Studios and Disney and someone who took a really cool pic of Garbage back in the day.