As we gear up for the season closer of The Handmaid’s Tale, the two previous episodes have shown us some of the worst and best in Gilead and the show’s writing.

Perhaps I read and write too much fantasy, but when you plunk a beautiful black wolf into the white snow watching a handmaid flee in red, I thought the wolf would show June the portal to Canada.  I understand he was there to increase tension.  Instead of worrying only about the ticking clock until someone locates her, June also had to wonder if the big bad wolf was going to pounce and eat her baby out of her belly.  And there was the whole black wolf vs. girl in red frock in the snow imagery.

Holly was another attempt to escape Gilead.  Despite less action happening in this escape compared to her first try, there was actually more tension.  Partially thanks to that wolf.  He simply stood there watching.  He never really growled menacingly or threatened June.  He howled.  But that’s what wolves do, especially when they need to tell you about the magical portal in the woods.  Stupid girl, should’ve listened to the wolf.

Perhaps Handmaid’s has gotten too grim, too close to home, that I hoped for some pixie magic to wisk us away to Neverland.  Instead, June spent half the episode packing a bag and ramming a mustang into a garage door only to get nowhere.  Then the Waterford’s show up, and we witness with June their deteriorating marriage unfold in an epic fight over who really is responsible for raping June and the reality that losing a handmaid a second time will lead to them hanging on the wall.

But it isn’t the Waterford’s execution we witness in Postpartum.  They’re too smart, too crafty to die – yet.  June gives birth to her baby, Holly, in the empty estate house, and Postpartum opens with the baby, now Nicole, in Serena’s arms back at the Waterford’s, where Fred compliments Nick on how he handled the situation and questions June about her loyalty.

It is Eden’s loyalty, or lack there of, to her husband Nick that is the catalyst for the rest of the episode.  I admit, I had pegged Eden wrong.  I thought she was going to turn against Nick for her own beliefs and we’d find him executed or on the run.  But Eden’s only 15.  She’s more interested in love than manipulating a system.  She and Isaac attempt to escape their cruel world like Juliet and Romeo.  Both probably remember a time before Gilead when love was cherished.  A tween with movie star pictures ripped from magazines on her walls.  A teenager with plans for college, frat parties, and girls.  Dreams stripped from them when the Waterford’s blew up the U.S.A. 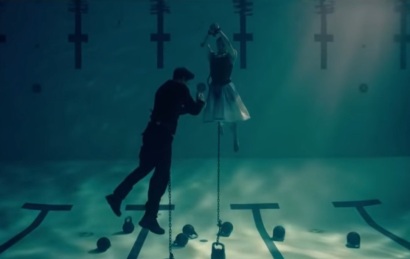 The setting for Eden and Isaac’s execution rocked me as much as the act itself.  A school or community pool where children once played and shrieked and enjoyed being kids now was the gallow for a child’s murder.  All to save the Waterford name from besmirching.  I loved Nick’s plead with Eden to just ask for forgiveness and denounce her love for Isaac, despite it not being the truth.  Always the quiet rebel against Gilead.  But Eden is all about truth, and Isaac for some unknown reason.

The shot that stuck with me the most was of Eden and Isaac’s bodies floating, dead and shackled to barbells – with all the previous barbells speckling the floor of the pool.  A reminder that Eden and Isaac are not the first executed here.

Postpartum also introduced Commander Lawrence (Bradley Whitford), Emily’s new “Of.”  And he’s not like any Commander we’ve seen before.  We caught Aunt Lydia passing judgement in her head when she saw the state of his house – more crazed college professor with books teetering on books and paintings of naked ladies than commander.  I could not read him, which is why I’m so fascinated with his character.  Neither could Emily.  She wasn’t sure if she could be honest.  Then again, she didn’t need to talk; he already knew everything about her.

In a very Jane Eyre moment, Commander Lawrence’s wife barges from her locked room in a crazed Mrs. Rochester state and tells Emily that it was Lawrence who devised the colonies.  What better handmaid to instill this knowledge to?  Emily’s already run over a guard with a car.  What will she do to the man who created the infamous toxic dirt shoveling?

My one complaint with Postpartum was the very end.  Yes, Serena was visibly upset over Eden’s execution.  She had taken a liking to the teen.  Perhaps she blames herself, as she told Fred to do whatever he saw fit, just leave her out of it.  Perhaps she could have swayed him to show mercy if she wasn’t so wrapped up in stealing another woman’s baby.  Which is why the last scene of her handing, almost reverently, Nicole to June for breastfeeding felt completely out of place.  She just spent numerous episodes making it clear June would be nowhere near the baby.  There is a thing called formula.  I’m pretty sure Serena would’ve tried it before attaching her stolen baby to the June’s breast.