At its core, Baggage is about motherhood.  June making the choice to leave her daughter in Gilead.  Memories of June’s mom, the fighter in the family, giving June the strength to push forward to freedom.

As a mom, this episode should’ve stuck with me, haunted me.  But it didn’t.  The only thing that haunted me was, until the last scene of the episode, I was bored.

We’re with June almost the whole episode outside of some toss away scenes with Moira that didn’t move the story forward.  OK, she’s having trouble adjusting, but her scenes felt either forced or a massively long set up to the one joke of the episode: Blessed Be the Fruit Loops.

I understand the significance of showing June’s mom as an activist and her disgruntlement in June.  June isn’t taking up picket signs with her mom.  Instead, she wants to marry and have kids despite the state of the country.  It sets up how far June has come.  She’s not a fighter, but she’s making her way to freedom through Gilead as one.   But something about the June in these flashbacks seems incongruent to the June of previous flashbacks.  If I recall, she did attend protests with Moira.  She was more like her mom than this episode painted her as.  But despite all the mother/daughter turmoil, I didn’t care.  I  just wanted to get back to her great escape. 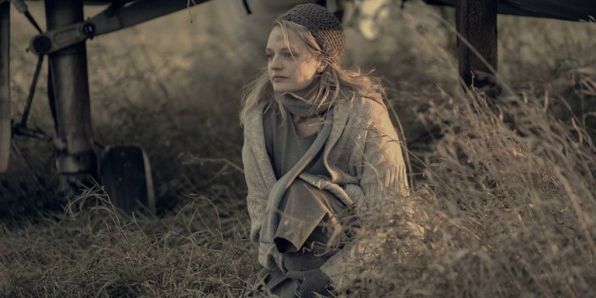 And you get the feeling she isn’t going to make it in this episode because she’s taking poor risks.  At the home of her reluctant accomplices, she was given one rule.  Don’t make a noise.   So she walks all over the place, taps her foot on the floor, stands by the open window.  Come on, June!

We learn the family is Muslim practicing in private, which we didn’t see coming because these are the folks who did the right thing in Gilead’s eyes.  June even said if she had gone to the right church, said the right things this could’ve been her fate too.  So…are we to believe these are recent converts to Islam?  Were they not practicing prior to the fall of the U.S.?  Have they been practicing in private prior to Gilead?  Otherwise, how did they get to live in the closest thing to freedom in Gilead?

All that being said, I appreciated seeing two men escape Gilead: a U.S. soldier forced to turn against the people he was sworn to protect and the driver in the plane.  The show has been heavily focused on the fate of the handmaid’s, rightfully so, but it was good to remember that men were coerced into this fate as well, wanting freedom and their old life back as much as the women.

Most of Baggage was forgettable for me.  However, one piece of the puzzle I’m still rolling around in my head was why did they choose that horrible Gwen Stefani song for the mom to sing in the car?  One, I can’t with it.  She raps about bananas.  Two, it made me wonder if that song was supposed to place time on June’s mom’s age.  Was she in college when that bananas sh*t came on?  Junior high?  You get the sense she was young, an impressionable age when someone would’ve once liked Gwen Stefani rapping about fruit.  At the latest, let’s say she was in college.  She’s roughly in her sixties now.  That means we are in the year 2044.  Just let that sit there a moment, because that ain’t that far away.