Angels, we are a quarter of the way through season 3 of Shadowhunters.  From On Infernal Ground to Stronger Than Heaven, we’ve watched Simon get the Mark of Cain, Jace join the dark masquerade, Raphael lose everyone he’s loved, and Clary move heaven to help her boyfriend.  But is it living up to City of Fallen Angels?  Let’s break it down.

Spoilers.  Angels have been warned!

Checking in with my fellow angels, I’ve learned you all don’t like The Owl.  My guess is this is because it is a departure from the book and felt obvious who the man behind the mask was.  Maybe it’s because I barely remember City of Fallen Angels as I wasn’t a fan of it, but I don’t hate The Owl concept.  The mask is a device the show is using because it is a visual medium.  But the mask isn’t awful.  I actually think it looks kinda cool.  That being said, I would’ve enjoyed more mystery throughout the season, more who is The Owl or why can’t we stop him.  A huge, horrible reveal for the season closer or midpoint would be Clary (and audience) discovering Jace is The Owl and he runs off with Jonathan for their backpacking trip around Europe, ushering in City of Lost Souls, which is superior to City of Fallen Angels and just so juicy delicious!  I can hardly wait!!

Sorry, I was daydreaming about naughty Jace.  Back to The Owl.

Despite what you think of The Owl, Dominic Sherwood continues to hit the right notes at the most subtle of times.  I loved the scene between Jace, Simon, and Kyle when they discovered who Kyle was and confronted him.  The moment Kyle said he was part of the Praetor Lupus, Jace was all business and on Kyle’s side.  Something about the note Dominic hit in that moment cracked me up.  It was so accepting of the situation that only a Shadowhunter would understand; it felt honest as well as humorous.  Not easy to pull off.

I’ll be honest, I barely remember Raphael’s story line except him in jail in Idris and then his death.  I certainly don’t remember him trying to be a daylighter and conducting experiments on vampires.  I’m guessing Heidi is supposed to be Maureen, who the show can’t call Maureen because she was some random friend Simon slept with in Season 1.  The writers of the show have a habit of doing this.  Last season we thought we had met Jordan when a new werewolf by that name entered screen left.  But now we have Kyle, who really is Jordan.  Why the crazy name switching?

Sorry, I digress.  Raphael.  Not a fan of his character going all Dr. Frankenstein on us, but I have to give props to David Castro.  We haven’t seen a ton of range from him before.  Raphael is typically a cool, calm, one-note character.  But one of my favorite scenes of the show was Raphael talking to his dying sister in the park, reminding her of his older brother who loved her so much.  It was heart breaking, honest, and beautifully done.

So many relationships happening this season!  Everyone still loves Malec.  How can you not?  Also, I’m glad Magnus is no longer acting like a doormat and Alec is showing his jealous, insecure side.

Clace is Clace.  I’ll be honest, their relationship through City of Fallen Angels isn’t that interesting.  I know die-hard angels hate me for saying that.  Once the traveling house adventure in Europe happens and our cast is divided into Team Good and Team Bad, things will get fun.

Dr. Izzy.  Isabelle is finally getting more screen time and battling demons on her own without ridiculous techno music.  Thank you!

I’d love to see this relationship with the doctor play out longer.  I find the more interesting moments in the show to the be the small ones, the side story lines that weave humor into them, and this could be a great source of comic relief.  Emeraude Toubia has already proven she’s got some comedic acting chops, so put them to use.  Izzy cramming her mouth full of chocolate still is one of my favorite “mundane moments.”

And Maimon.  That’s Maia/Simon, just doesn’t have that ring like the others.   The pair have good chemistry on screen.  Part of me wonders if directors paired Emeraude and Alberto up and found zero sparks, but Alisha and Alberto – fireworks.  I have no clue where this relationship is going.  The show likes to take us on random paths that are foreign to the book but circle back to the destination, so it’s likely this pair will deteriorate or implode and perhaps Izzy will be in the wings.

Finally, let’s discuss our antagonist for the season.  Season 1 was Valentine, who I never cared for.  Season 2 we were gifted Sebastian/Jonathan, and I love him as a villain.  Season 3 welcomes Lilith – First wife of Adam, cast from the garden of Eden, mother of demons.  Her title is almost as long as Daenerys’s.  I had hopes for her when the season started.  Anna Hopkins is interesting to watch on screen, but the character has proven weak.  Yeah, I know she’s enthralled twenty or more New Yorkers to kill their loved ones and stole some of Clary’s soul, but hear me out.  This is the mother of demons!  She can transform into a flying dragon/demon creature from hell.   Her goal is to resurrect Jonathan.  Yet she is so powerless she has to brainwash mortals to kill each other, not take their victim’s blood, but return to her and provide her with their own blood.  This is one spell I don’t understand and probably why I’ll never achieve mother of demon status, but why doesn’t she just take the blood herself?  Did you see what she can turn into in Stronger Than Heaven?

Speaking of flying demon mommy, her wraith demon face was so close to Clary at Luke’s farm Lilith could have licked her nose.  Or maybe killed Clary.  She needs her out of the way so Jace remains The Owl, so why does Lilith – more powerful than Magnus – go to a warlock for an anti-love spell when she could roast Clary like a campfire marshmallow with her demon/dragon breath?

Oh, Shadowhunters!  Again you leave me questioning the main plot but loving the little stories weaving around it.  As predicted, I’m enjoying the season enough.  No love lost for book 4, so I’m in for the ride.  But there is something missing… 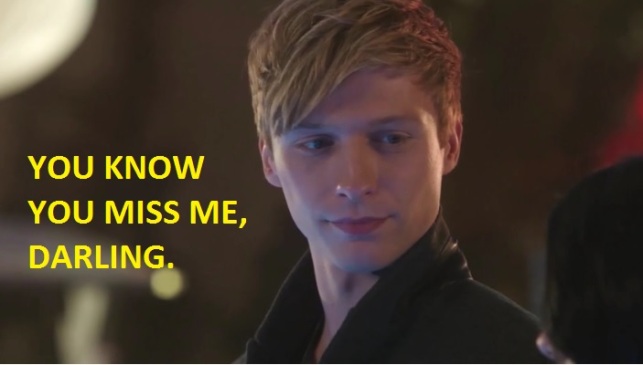