Stories we read in our childhood leave an indelible impression on our psyche.  We remember them with fondness and love.  They are the emotional security in the phrase “curling up with a good book.”  But do they last?  I don’t mean on the shelf, or even in our minds.  As an adult, when we pick up that beloved childhood book and read it again, do we still love it?

I like to think I’m a child at heart.  I’m raising them and sometimes feel like I understand  my 10-year-old better than my adult friends.  But something definitely changes on the inside as we leave behind toys and stuffed animals and childhood stories.  A bit of magic in the soul is lost, and I feel this the strongest when reading to my kids.  Books I loved as a kid like The BFG or Tales of the Fourth Grade Nothing, don’t recapture my imagination and passion.  I find myself asking, “What did I love about this book?  Was it never that good?  Or have I lost some magic from my soul?” 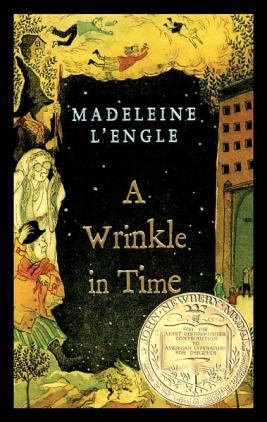 My kids are in a heated battle to see who finishes A Wrinkle in Time first.  Each was given their own copy by a BFF.  My daughter picked hers up immediately, curious by the sketches on the cover and bright gold Newbery Medal, and started reading.  My son didn’t show much interest until his little sister beat him to it.  Now the competition is on, and I find myself reminding them reading isn’t a race, just enjoy the book.

But I’m not.  Not really.  Granted, I never read A Wrinkle in Time as a kid.  It was too hard for me.  I’m raising avarice readers, but I wasn’t one.  I was dyslexic, and books were like a puzzle with shifting words and paragraphs, sometimes pages, I had to reread multiple times to follow.  I tried to read A Wrinkle in Time when I was younger.  My sisters loved it.  I remember the picture of the ant and the string.  That stuck with me all these years, but I couldn’t remember if it was A Wrinkle in Time or The Phantom Tollbooth, another book I was told to read and never did.

I decided I needed to read  A Wrinkle in Time.  The movie’s coming out and, hey, we’re Novel2Screen.  Also, Newbery winner.  People across the world love this book.

But as I’ve delved deeper into the book on my own and reading with my daughter, I’m just not wowed.  The characters seem flat, conversations jump from one thought to another with no progression, and things seem to happen willy-nilly. One moment Meg, Calvin, and Charles Wallace are in the woods between houses and then suddenly they are on another planet.  I feel like the story is progressing with no preparation.

After I read a chapter to my daughter, I handed her the book back so she can climb into bed and read more pages illuminated by her flashlight.  She stroked the cover fondly, a distant smile curving her lips.  “I love this book,” she said.

“It’s an adventure!”  The way she said it was full of heart, hope, and innocence – like gazing up at the moon and promising yourself you’ll go there one day.

My heart soared for her while dipping for me.  Why can’t I feel the adventure?  Why am I not allowing myself to be swept away on this fantastical journey with her?  Instead of cutting myself a break and rationalizing that the book was written for children, not adults, or  accepting that it was written in the ’60s and writing styles change over time, I assume it’s because growing up has destroyed a part of my soul and an element of childhood magic has been stripped from me.

Pretty melodramatic.  And also true.  For all the reason above, it’s true.  A Wrinkle in Time was written for kids.  Although there are some books like the Ramona Quimby series by Beverly Cleary or Diary of a Wimpy Kid  series by Jeff Kinney that still capture my imagination and transport me back in time, some books won’t.  I fear the further we are from the book in time, the harder it is to sense its presence.  Pick up a novel from the seventeen or eighteen hundreds and you’ll understand.  Writing styles morph through time and have their own way of distancing us from the story.

And despite whatever I feel in my heart, I’m no longer a child.  I’ve experienced the ultimate joy of being a mom as well as the nadir of death.  On the other end of it all, maybe I’m a little more jaded, a less magical.

Sitting around chatting about our favorite childhood books, a friend told me not to read Anne of Green Gables again.  She said it didn’t live up to what she remembered and I’ll be disappointed.  This crushed me as Anne of Green Gables became a quest for me.  As a kid I rented the book from the library.  Large, hardcover with the most beautiful illustrations I had ever seen.  I have been on a quest to find that version of the book for decades now.  It’s out of print.  I’ve dug through used bookstores, garage sales, Amazon in the hopes of stumbling upon it.

I found it again.  In a library.  I look forward with trepedation to reading it with my daughter.  And I hope the magic isn’t gone, that my friend is wrong, that L.M. Montgomery will restore a little magic to my soul.

5 thoughts on “Where Did My Magic Go? – Wrinkle in Time”