Loved the season opener to The Magicians.  Heroes and Morons – not so much.  It was half a great episode.

Eliot sailing off on his quest with his “family” intact was wonderful.  Was that Margot getting choked up and providing solid advice about making smart decisions?  Were those calculating eyes tearing up?  I loved her speech to Eliot.  They’ve lived non-romantically so well in Fillory that I almost forgot that at certain times they were best friends with benefits.  This moment was needed for Margot.  She was coming across too cold and heartless and selfish.  This scene reminded everyone she’s as screwed as the rest of Fillory, partially her own doing, and her love for Eliot is unique.

Eliot’s grounded and dismal outlook on his family contrasted with Fen’s quirky, insane devotion to it provided the LOL moment of the episode.  With joy Fen declares they’re a family, and Eliot agrees they are f*cked up enough to be one.

While Eliot traded dysfunctional life in the castle for dysfunctional life on a boat, Quentin, Julia, Kady, and Josh traipse around NYC essentially in search of the origin of a bar fight.  Rumors that Mayakovsky turned into a bear spark their “quest”to find not him, but his batteries. 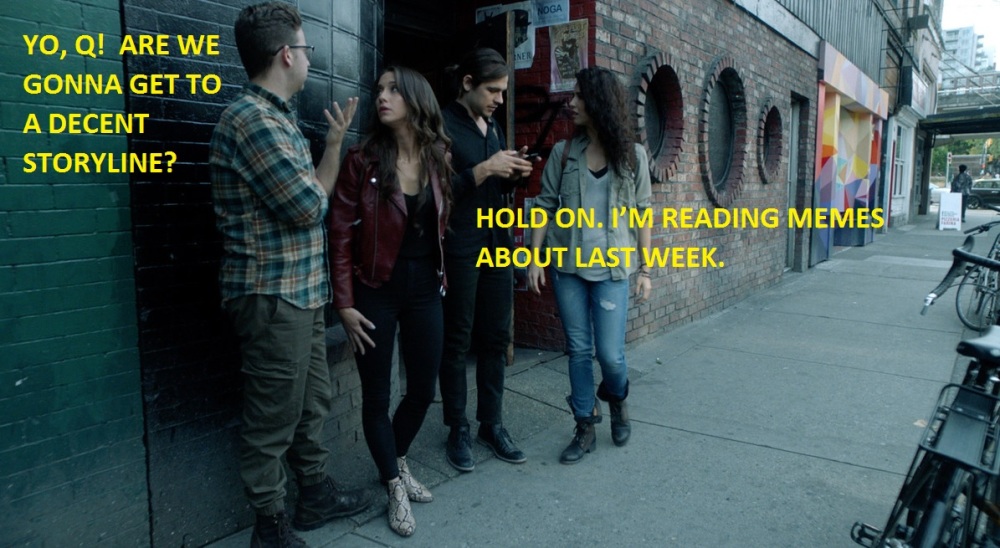 This storyline pretty much meandered all over the city with no direction and no resolution.

If this gang is stuck in NYC all season while Eliot is alone on his adventure, I’m not going to be happy.  Get Q on the boat!  That’s where the books demand he be!

Speaking of adapting the books, there is also a short interview on Liberal Values with Lev Grossman.  He talks about the process of adapting The Magicians to TV vs. writing the novels.  He says, “I realized that when you write novels, you have a lot of control over what’s going on. It’s not a collaborative art form. It’s one of those art forms where you get to do it all. You write all the dialogue; you point the camera where you want to; you dress the set; you do the costumes. So really, it’s a one-person act.  And when it came to collaborating, to passing this story that I’d written on to other creators, it was definitely unnerving.”  Read the entire interview at Liberal Values here.

I’m hoping tomorrow night will be a complete episode.  And that I’ll understand wtf attacked Quentin and how it is the same or different from the kitty exploder, because I’m a little confused on that.

Watch The Magicians Wednesday 9pm on SyFy.  Follow Chris on Twitter @ACCooksonWriter and Novel2Screen for more Magicians, interviews, and more!