Spoiler alert about “Outlander” 3.12, The Bakra, and the book “Voyager.” Don’t say I didn’t warn ya.

Holy moley, this episode had everything but the kitchen sink in it, people! Okay, let’s talk about it:

So this was the second episode written by Luke Schelhaas, who is new this season, and who really had his work cut out for him to consolidate so many different parts of the book into one semi-coherent (usually) sequence of events. The story covers the Governor’s Ball, which I dissected in my MOCK EPISODE 10, but it also covers the slave trade, which I dealt with in MOCK NINE, and a whole bunch of reveals that I had saved for MOCK 11 and MOCK 12.

In other words, they took the last 300 pages of the book, stuck them in a Cuisinart, pureed on high for five minutes, and out came Outlander Soup. Do I like Outlander Soup? Sure, why not? It’s spicy, but with unexpected creaminess, and, if you’ll pardon the expression, the iron and proteins in it really do wonders for the skin.

Do the events of this episode bear even the slightest resemblance to the book? Well, that depends how you define the word “slightest.” The answer is: yes and no.

That said, there was some simply fantastic additions (and realizations of existing plots from the book). Namely:

GEILLIS IN THE POOL OF BLOOD

This was apparently the brain child of Matthew B. Roberts, who is the kind of kinky that I personally dig. And kudos to actress Lotte Verbeek, who just went for it. The book keeps Geillis’s identity a secret for longer than this, but I actually appreciated the show going ahead and giving us this reveal now. It gives the character more (terrifying) screen time, and gives us the context we need to know what’s happening at the Governor’s Ball. 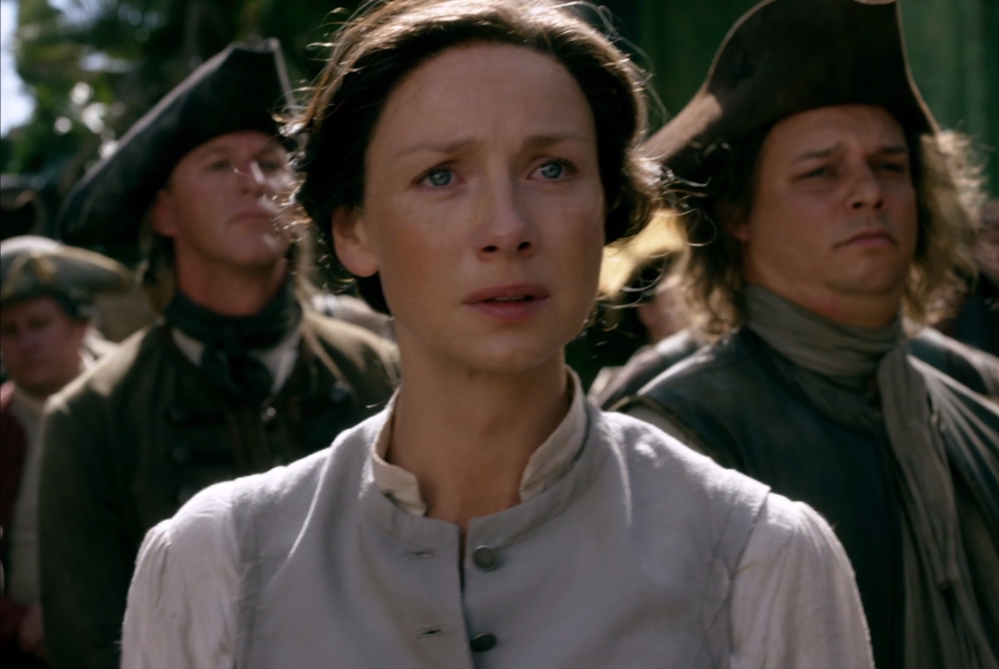 As I said last week, I was really hoping they wouldn’t skip this storyline, as the theme of slavery versus freedom, as well the modern-day sensibility of Claire, who is—let’s not forget—a fish out of water in this time, are both so central to the “Outlander” novels. And yes, this was a rather condensed version of this plot point, so much so that it felt a little crammed in there, perhaps, but it was still well acted and impactful. 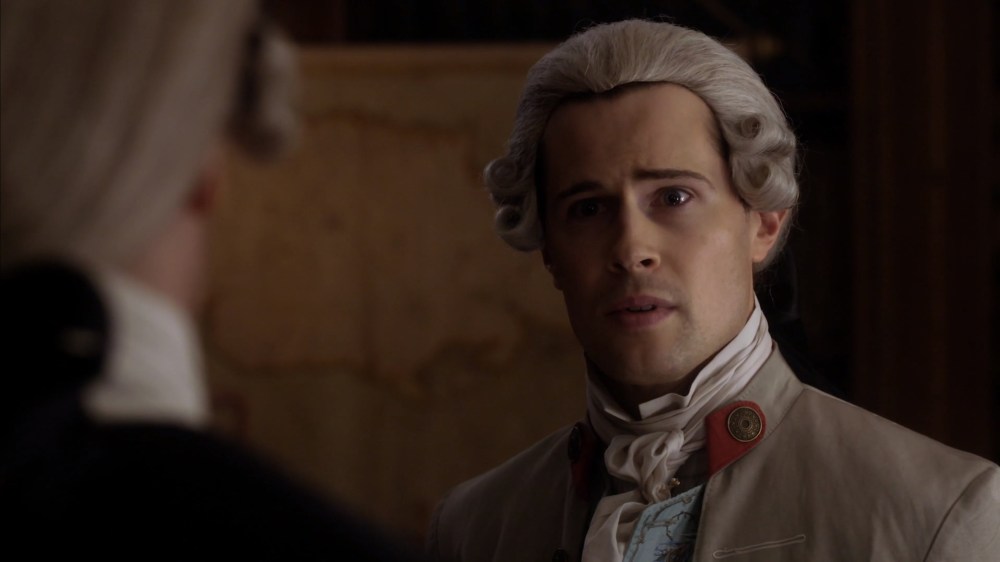 So in the book, Claire walks in on Jamie and John embracing, and misinterprets the action as a mutual romantic encounter, which leads to (yet another) rift between her and Jamie. Personally, I’m glad they made this more nuanced here. Yes, you could see that Claire was a bit uncomfortable by how close John and her husband were, but in this version of events, Claire already knows about Geneva and the baby Jamie had with her; she already knows that John is raising that baby.

And yet, it’s hard for her to watch their connection and not feel a part of it. To me, this feels more like a fully fleshed out marriage. They don’t keep secrets from each other, but the realization that your partner had a life without you can still sting.

Okay, was this a little on the nose? Maybe. Did it require a little too much exposition and the kind of far-fetched idea that John Grey just HAPPENS to be wearing the gemstone that Geillis was looking for earlier right when she HAPPENS to need it?

Yeah, fine. They may have been reaching a little with this bit. BUT… it led to that interesting scene of Margaret Campbell telling the “fortune” about killing the baby who was 200 years old on the day of its birth (hmm, wonder who that could be?), which nicely sets up the finale next week.

Where to begin? Margaret Campbell being missing; Willoughby possibly killing the woman who was flirting with him all night; all the stuff with Temaraire eventually going off with Ishmael (remember him?)

Honestly, I didn’t need any of it. And as we’ve been saying, a whole bunch of stuff was going to have to get cut or consolidated to make this story fit into the last few episodes.

AND THE MOST NEEDED ADDITION AWARD GOES TO:

Okay, I’ve said before that I’m not a big fan of coincidences in fiction. It always feels like, with more forethought, the events could have occurred in a more organic way. And, sorry Diana, but “Voyager” has SO MANY COINCIDENCES. I mean, flippin’ everybody that we met in Scotland just HAPPENS to be in Jamaica at the same time, and they just HAPPEN to be at the same party, and Ian, Jr., just HAPPENS to have been kidnapped by Geillis, who HAPPENS to be looking for a way to restore a Scottish king, which it HAPPENS to be can only occur by killing the heir of the two people who HAPPEN to be at the party with her.

Um, anyone else have alarm bells going off in their head?

Which is why I was particularly glad that Mr. Schelhaas included this little moment: 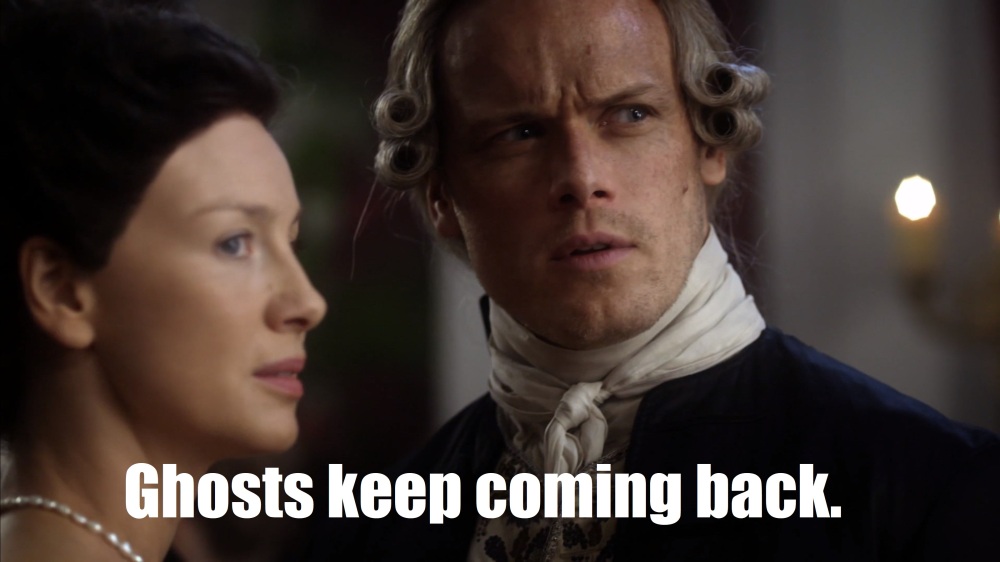 With one significant glance and realization, all those coincidences feel instead like they might be part of some divine plan that our protagonists are just beginning to realize they’ve been caught up in. There’s an almost supernatural feeling to this moment, and it (almost) makes me forgive all those coincidences.

Also, tell me if you disagree with me on this one, but I could have just as soon skipped the ending. I don’t ever need to see Jamie arrested for treason again. We’ve all already seen this movie, and it’s always depressing. (Especially since we know he’s just going to be freed again before next week. I mean, they give it away in the previews at the end, so…)

Okay, so we’re almost done with this season, and I think it’s been a strong one in many respects, even if it does veer from the books more dramatically than previous seasons. I’ve liked a lot of the additions, including much of the Boston stuff (even if I felt it went on a bit long).

I will say that I miss some of the Fergus/Marsali interactions that just didn’t make the cut due to the fast pace of these past couple episodes. They’ve started to feel a bit like extras in this thing, which is a shame.

But the real part I miss, and it’s nobody’s fault I guess—just a necessity of condensation—are the omissions of moments like this one, which falls at the end of the Governor’s Ball evening in the book: 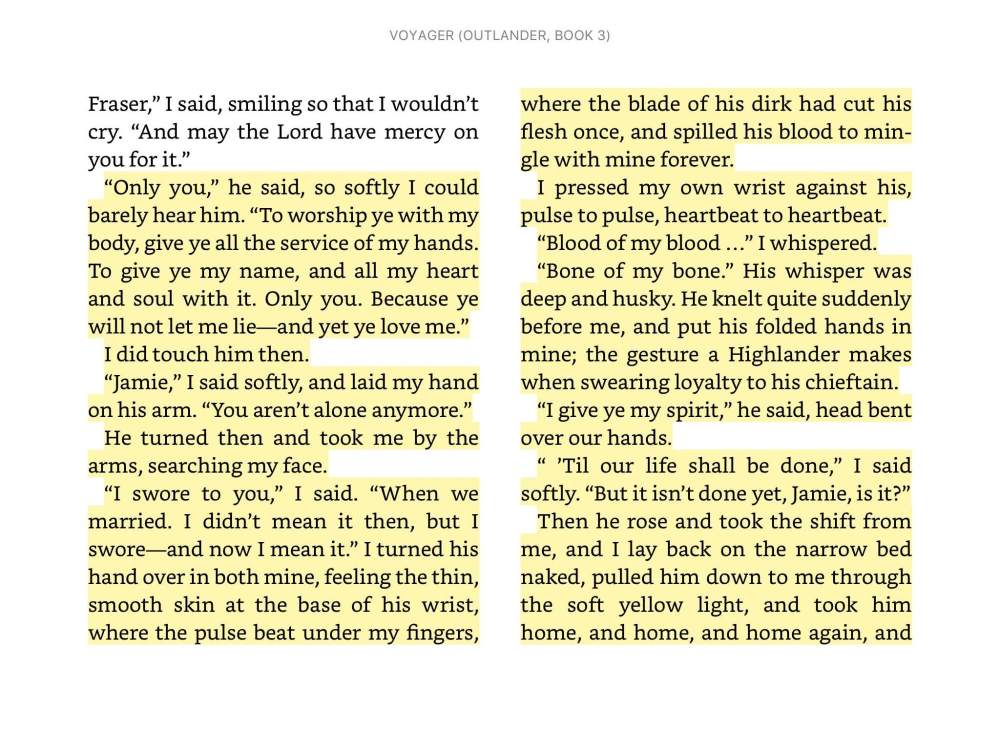 I mean, come on, guys. I know we need to find Ian, Jr., and stuff. But can we just get a little more “bone of my bone” before we part?