Welcome back, darlings. So it’s been a wild week out here in La La Land. 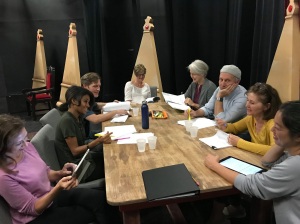 By complete and sheer coincidence, my two worlds collided this week when the theater company I’m a member of, The Open Fist, produced a staged reading of a beautiful new play by Outlander writer/producer Anne Kenney. I was so thrilled to get to read a part in her heartbreaking play, Last Call, about the passing of her parents (that’s me in the purple, and Anne at the far end), and to speak with Anne about Outlander and her long writing career.

I also got to meet her husband Fred Golan (writer/producer on Amazon’s Sneaky Pete) and some other Outlander writers, including Joy Blake (“First Wife”) and Shannon Goss (“The Doldrums”).

Anne is absolutely lovely, and she shared some juicy tidbits about both Outlander (yes, Sam does look that good naked), as well as her fascinating career. I’ll be sitting down with her after Thanksgiving for a more detailed interview, and I can’t wait to share it with you. Stay tuned for that.

Spoiler alert, about the show and the book Voyager. Let’s talk about “Heaven and Earth.”

So we learn a lot of important information here, including the fact that there is literally no hairstyle Caitriona Balfe can’t make work. (Seriously.)

This is the first episode written by Luke Schelhaas, who really knocked it out of the park. Ron Moore mentions in the post-show interview that Luke really did his research on this one, and it shows. Every detail was carefully placed, and yet I never felt bored. The plot here pretty much coincides with my Mock Seven, but they wisely decided to end the episode with the cliffhanger of Claire diving into the sea, a bit short of where I ended it.

Now there’s a lot of deviations from the novel in this episode, and I have to say, I didn’t mind them one bit. The two biggest changes, of course, are having Jamie locked up by the Artemis’s captain for most of the time—which I thought was a smart choice. It gives him some nice dramatic stuff to play while separated from Claire.

This also gives Jamie and Fergus an opportunity to have some heart-to-heart conversations that aren’t in the book, during which we get the—drum roll please—THEME OF THE EPISODE! Namely, this:

And of course, there’s a second change. Anyone else notice that John Grey was nowhere on that Porpoise? I actually really like this change too. As I’ve mentioned in my reviews before, I HATE coincidences. And no offense to Herself, but there are so many of them in Voyager. Seriously, Diana—John Grey just happens to be on the ship that kidnaps Claire? That’s convenient.

Except here, it doesn’t happen.

Another switch in this episode was, I thought, particularly effective, and that was the addition of this guy:

In the book, we get a great sense of Claire’s absolute devastation that she can’t save more of the men aboard the Porpoise. The fact is, she simply gets there too late to do much for the ones who are already affected. All she can do is prevent more spread of the disease.

The very smart choice to embody this despair in an actual person, the young boy Elias, with his rabbit’s foot that probably reminds Claire of her daughter, is probably the best lesson we’ve learned this season about adaptation.

(Note: Savvy readers have pointed out that Elias Pound is in the book, but his role is given a lot more screen time here. Thanks for keeping me on my toes, folks!)

In a book, we get lots of voiceover to tell us how our characters are feeling. On screen, we need to see it. And this lesson really does that for us:

But sometimes, we are affected despite ourselves.

I also thought the addition of a scene in which Claire tries, unsuccessfully, to run away from the ship while the goats are grazing was an interesting decision. At first, it kind of just seemed like filler to me. With Jamie being locked up (and looking sad and hot) for so much of the story, the writers may have needed a little more “stuff’ to fill the time.

But in the end, it really added something to Claire’s desperation level that made the final decision to plunge herself into the ocean make more sense.

Next week, we’ll learn what happens to Claire once she reaches the shore. (Hint: Like typhoid, it gets worse before it gets better.)

Other than that, the plot of “Heaven and Earth” was quite beautifully true to the book. This really is such a dramatic and integral part of the story, with Claire trying to save the men’s lives amidst the revelation that Jamie has been spotted and therefore might be hanged for treason.

(Side note: Anyone else wish Jamie would just STOP committing treason? Like, I get it. England is the great oppressor and stuff. But Jesus H. Roosevelt Christ, how many times has he been sentenced to death, whipped, starved, slashed open, imprisoned–it’s enough with the treason already, Jamie. You just get caught every time.)

Anyway, where was I? Ah yes, typhoid.

With an A+ job by all involved here, I really want to tip my hat to the cast and crew of this one. I had predicted, in my mock episodes, that this part of the book might be my favorite to watch in the show. And I was not at all disappointed.

What did you guys think?