Okay, friends, so what have we learned from this episode? (Other than the fact that you shouldn’t leave a fire burning in a vat of hot ink in a wooden building while you’re not at home?) 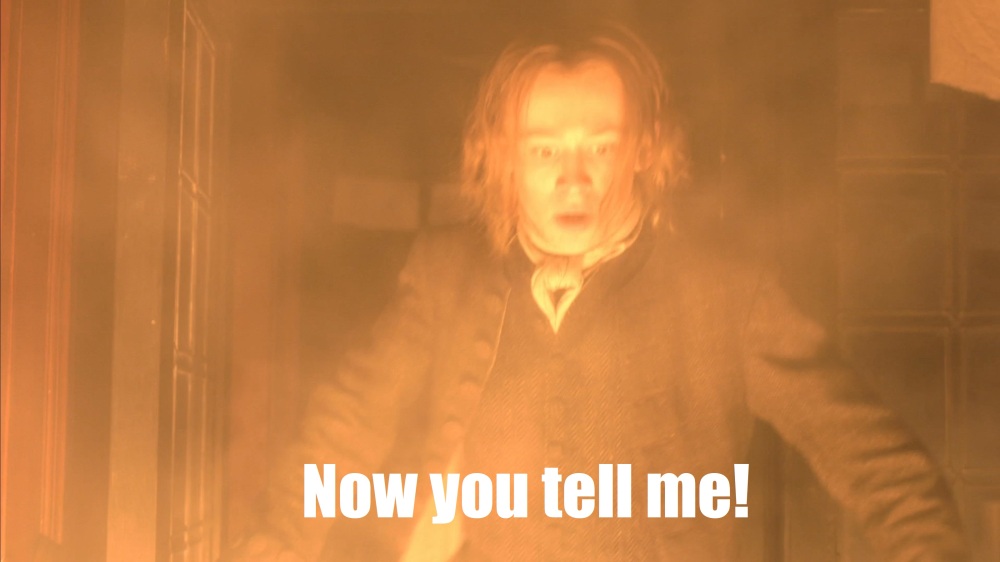 This episode, Crème de Menthe, was the first penned by new staff writer Karen Campbell, and I must say, they didn’t exactly lob her an easy one, did they? The action here pretty much corresponds to my MOCK EPISODE THREE, which I called “Smuggler’s Moon,” based on a part of the book which they seem to be skipping. I thought she did a great job, although someone should probably tell her that Jamie doesn’t call Claire “Sassenach” every time he speaks to her.

Now we’ve known for a while, based on the slower pace of the first half of this season, that Ron Moore and Co were going to have skip something at some point, and this was the first big excision we’ve seen. (See what I did there? “Exciseman,” “excision.” I know, I know, I’m very smart. Let’s move on.)

Personally, I don’t blame them at all for skipping the Smuggler’s Moon shenanigans, which you may recall from the book was a rather long-winded, and, let’s be honest, kind of confusing, sequence in which the gang head out at night to smuggle the booze, but the plan goes awry and Jamie is framed for hanging a man, but then Ian, Jr., gets lost and…

Oh, who cares? We’re not doing that here.

Here’s what we did keep: Ian Jr. losing his virginity: 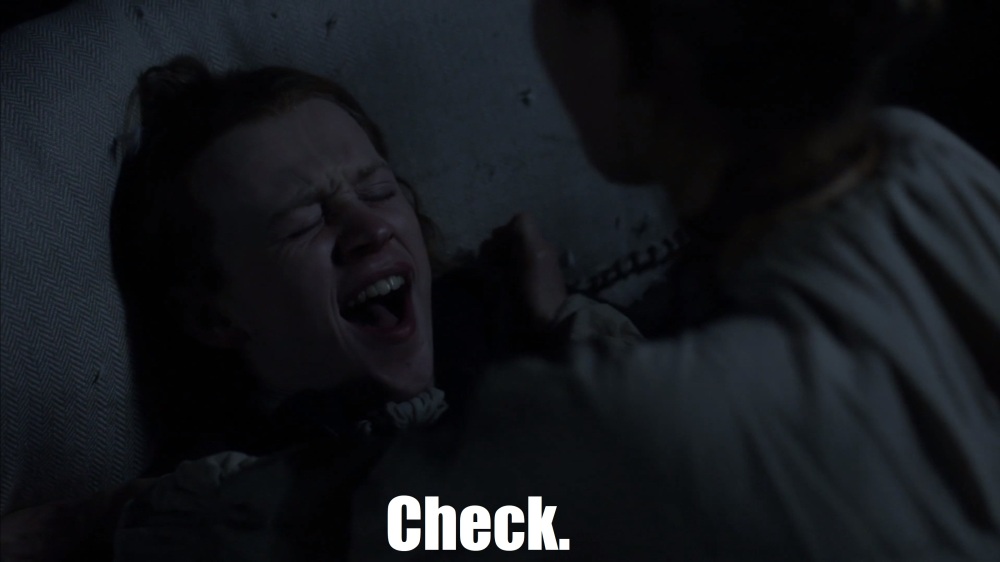 The exciseman being killed and dumped in a barrel of Crème de Menthe:

The printshop burning down (insert emoticon of sad face here):

Oh, and of course, we did meet Reverend Campbell and his crazy sister Margaret. We didn’t get a slice of her backstory, as we had in the novel at this point, but we did get the rather ominous “Abandawe” utterance from her that will, rest assured, come up again later.

(PS: Anyone else like the introduction of the Campbells as “soothsayers” this early? I thought it was a nice touch.)

Here’s what they changed:

EVERY FLIPPIN’ THING ELSE.

OMG, where to begin with the changes? Claire accidentally wounds the exciseman and then freaks out about and tries to save his life but fails (a change that I actually liked–it doesn’t happen that way in the book– as it gave her A MUCH more compelling and urgent action here than in the book); Ian, Sr. heads back to Lallybroch without ever discovering that his son is, in fact, there; “the Edinburgh Fiend”—apparently not happening; the whole Smuggler’s Moon thing is out, as well as the rather convoluted sequence in which Jamie tries to determine a safe port for shipping off the booze.

Oh, and lest we forget, Fergus lets this little bomb drop: 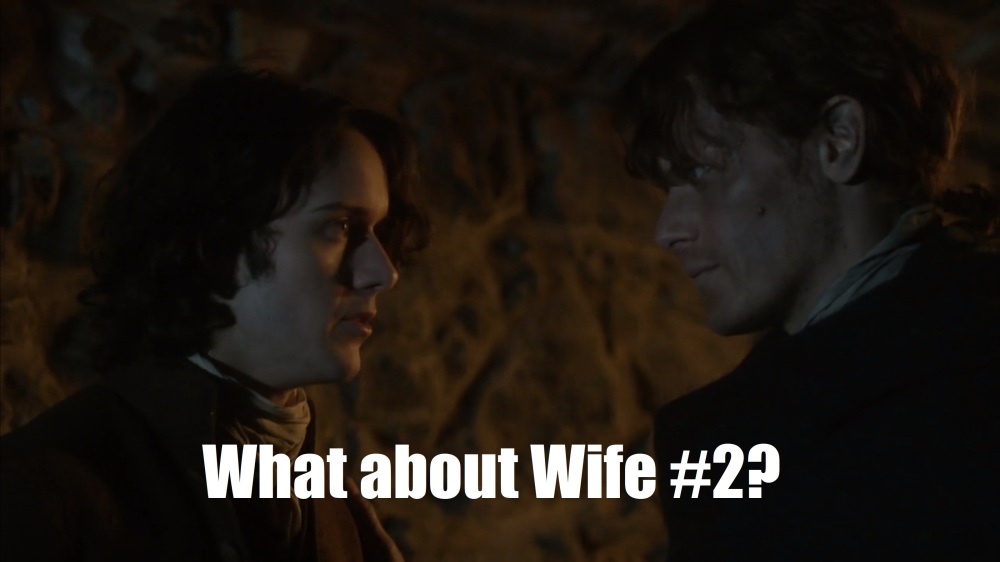 Holy spoiler alert, Batman. It’s like they took the plot points of the book, wrote them down on small pieces of paper, dropped them in a hat, and then plucked them out in no particular order.

Did I like this episode? Yes. Did I miss the Smuggler’s Moon stuff? Honestly, no. They established what they needed to (Jamie’s life as a printer/booze smuggler has reached the end of its rope, and if he wants a future with Claire, he’s going to have to start over) without confusing the hell out of us and without spending the money that shooting that night escapade would have cost.

So maybe not every change worked perfectly (the segue from Jamie defending his choice to lie to Ian, Sr., to Jamie being angry about Brianna’s bikini felt a little forced) but, hey, we’re working things out, right?

Perhaps most importantly, the writers have set the scene for Claire and Jamie being at odds over who they’ve become, and what kind of life they consider “normal.”

Claire, who is frustrated here at having lost a “patient,” frustrated with the constraints of treating people without modern medicine, frustrated by the lifestyle Jamie has chosen (and extremely frustrated—rightly so—at his having lied to his brother-in-law), now has a pretty substantial reason to doubt whether or not they still belong together.

In the next episode, when we return to Lallybroch, this tension will be very important.

Till next week, my friends.