We will be discussing Outlander season three, episode two in this article, as well as the book “Voyager.” Beware of spoilers.

All right, my lovelies, I’m going to get right to it. While there were some simply lovely moments in this episode, and Sam Heughan was particularly good, I think we’re now seeing evidence that I was on to something when I skipped ahead a bit in my mock episodes.

As most of you know, I created a series of 13 mock episodes for this season of Outlander, and I made one rather dramatic change: I fast-forwarded quite a bit to Claire heading through the stones, back to Jamie. In fact, in my version of events, this happens in my mock episode two, which I entitled STONE AND FIRE. (Most of Jamie’s life pre-Claire returning is seen in flashbacks throughout the season.)

Here’s the deal, and I’ve said it before: The first 200 pages of Voyager are basically an epic Greek tale about the trials and travails of James Malcolm Fraser. And there certainly is plenty of meat in those pages to fill many hours of television. In fact, as I’ve said, I could easily have written a 13-episode arc just about Jamie, and never even mentioned Claire, or, you know, the 700 pages of story that follow in which the actual plot of the book is revealed. That’s how much story Jamie has to get through. (And we haven’t even scratched the surface of it yet, have we, book readers?)

And while Jamie does all those crazy things in the book, Claire kind of takes a siesta. In fact, for most of those first 200 pages, we barely see Claire, except to learn that she’s dissatisfied with her new life and decides to go back to medical school.

The simple fact is, the “Claire” experience during those 20 years of separation and the “Jamie” experience just don’t have a lot to do with each other. There aren’t enough thematic tie-ins between their two experiences to make a cohesive episode of television out of, and as a result, you end up with two different TV shows crammed onto the same screen.

On top of that, Jamie’s experiences are simply more dramatic than Claire’s, meaning you’re forced to cut from Jamie doing something devastating, like watching Fergus lose a hand, to something mundane, like watching Claire host a boring dinner party (or close her eyes during sex and pretend her husband is actually Jamie Fraser. You know, typical woman stuff).

One of these things is not like the other.

This is not to slight Anne Kenney, the fantastic writer who gave us this episode (and who also gave us season one’s “Wedding” episode, for which we are still grateful). The writing, dialogue, character development–it’s all here in this episode. I simply would have edited it differently.

Now you all know I love to play “TV writer,” so I’m going to play a little game with this episode, because that’s the kind of geeky thing I do for kicks.

TITLE: “A Phantom Limb” (not to be confused with Phantom Menace)

THEME: Phantom limbs—missing things that should be there, but aren’t.

Let’s imagine we open with Claire’s VO: “I was bored, so I went to medical school.” Claire walks past bagpipe dude in the park: 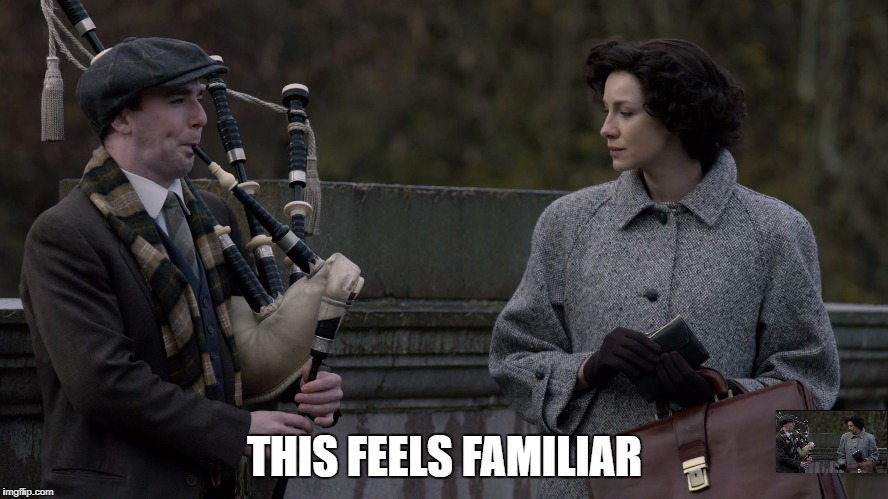 She shows up for her first day of class, meets her new BFF Joe Abernathy, and they both endure the vicious, hostile glares of their new classmates.

And from that, we CUT TO:

The vicious, hostile glares of the Redcoats staring at Jenny and Ian.

The episode progresses from there, until…

Jamie is hiding in the closet with Jenny’s baby, the camera closing in on his eyes. He’s trapped. They’ll find him. He’s terrified.

Claire at the dinner party, pretending to have fun. The camera closes in on her. She’s trapped. What if they see through the façade? (Okay, this isn’t the best parallel, but at least we’re tying in some thematic elements between our two main characters’ stories, right?)

Fergus loses the hand. It’s bloody, it’s gory (seriously, I wanted more blood and gore there, guys. Outlander really cooks when it’s disgusting). Jamie ties a tourniquet around the limb. He says, “I’ve seen m’lady do this many times.”

The hand lies on the ground, a disfigured, dirty lump of flesh. 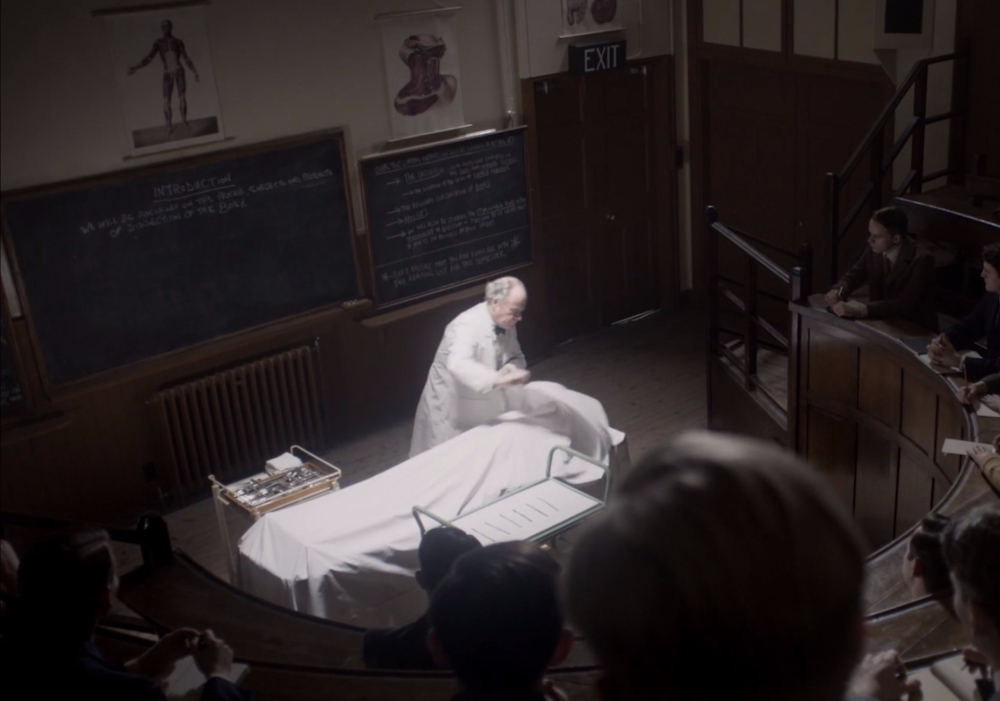 The body of the cadaver, clean. Bloodless.

The parallel is clear–body parts, cadavers. Dirty for Jamie, clean for Claire. But nevertheless, devastatingly severed.

Oh, and needless to say, the scene of Jamie having sex with Mary McNabb (which was so beautifully played by both actors, by the way), would have to juxtapose with Claire closing her eyes while making love to Frank.

All right, I’m not going to write a whole treatment, but you get the idea.

That said, there is something to be said for the slow, simmering pace of these episodes, and the tension they’re building towards our eventual reconciliation. (Oh, print-shop scene, why do you tease me so?)

Also, I’m moving to Scotland. Those woods! That river! The green hills! I’m dying over here.

But before any of us can move anywhere, what say we meet back here next week? Because I think we’ll finally get to meet a certain Lord John Grey.

Till then, my lovelies.