If you’re like me, you relish an afternoon in the library with the kids as they roam the stacks deciding which written treasures they are going to haul home for three weeks.

Inevitably, they check out more books than they end up wanting to read.  So how do you know what your kid will really WANT to read after the library trip?

Check out Novel2Screens Summer Reading List for kids learning through high school.  These never go out of style:

For kids summer is about riding bikes in the neighborhood, pool parties, trips to Yogurtland, and driving camp counselors mad.  But at the end of every school year teachers repeat the golden mantra of summer: Don’t forget to read!

My kid’s principal declared that every kid should be reading 45 minutes a day.  That’s a lot of reading even for me, considering the book tends to fall on my face after ten minutes as I conk out for the day.  But it is even harder to get picky kids to read.  No, not picky as in they won’t eat Brussels sprouts.  (Honestly, I don’t care how hipster you make them with bacon, they’re still gross.)  No, I’m talking about the picky readers.  Or the ones who just don’t want to read.  I think with a little extra digging at the library, there is a book out there for every kid – even one to rope in the picky reader.

Here are my suggestions for great summer reading for kids.

For the preschool or kindergartner the key is fun, silly, and simple words.  I’m a huge fan of Dr. Seuss’s Hop on Pop to get them reading as well as P.D. Eastman’s Go Dog Go.  Wacky Wednesday is also classic.  It isn’t going to help them read, but it will get them counting all the wacky things that happen that Wednesday in Miss. Bass’s class and around town.

I also recommend sight word books, like Bob Books by Bobby Lynn Maslen & John Maslen or Harcourt Decodable books.  The phonics readers never worked well with my kids in teaching them to read.  They were great once they started.  But a set of sight word books gets them learning the words they need to get through kindergarten with success. 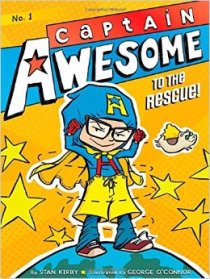 Captain Awesome – I stumbled upon Captain Awesome in the library with my son, who was struggling to care about reading at the time.  He was a good reader, but nothing fiction was interesting him.  Captain Awesome is a great blend of comic book and early chapter reading before you get to the larger books like Diary of a Wimpy Kid.  I fell in love with the Captain Awesome series by Stan Kirby.  Captain Awesome (aka Eugene McGillicudy) is a neighborhood super hero and elementary school kid who saves the day with his loyal side-kick Nacho Cheese Man from the evils of Queen Stinkypants (his baby sister), Mister Drools (the next door dog), Little Miss Stinky Pink (that know-it-all we all hated as kids), and more.  This series captures the true essence of childhood in a hilarious and unique way.   My kids read them all and now have out grown them, but I will still steal away to the Captain Awesome section of the library to see if a new one is out – for myself to read. 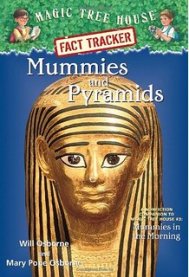 Magic Tree House Fact Tracker – I’ll be honest, I’m not a HUGE fan of The Magic Tree House series.  Not that it isn’t good as a beginning chapter book series.  It is.  It just didn’t grab my attention or my kid’s like other books did.  So why am I including them here?  Because May Pope Osborne also writes non-fiction companion books to accompany her fiction stories.  I think the non-fiction books blow away Jack and Annie’s time traveling adventures.

Her non-fiction books are based on her research while writing the series.  There is a great one called Magic Tree House Fact Tracker: Mummies and Pyramids that simplistically explains the religious beliefs of ancient Egyptians, information of how mummies were made, funerals, and famous ancient Egyptian discoveries.  If you look on Amazon, there is almost one on every subject.  And if there is a Magic Tree House book your kid loved – like my kid who read Tonight on the Titanic in one morning – make sure to pick up the Fact Tracker book.  Schools state kids need to read more non-fiction at a younger age, and Osborne has done a great job with these.

Frog and Toad – I loved Frog and Toad as a kid, but I had forgotten about them until a friend of mine gave my kid the series for a birthday.  This series follows the endearing friendship of Frog and Toad as they help each other through life’s struggles like feeling uncomfortable in a bathing suit, boredom, and finding ways to make chores fun.  All things kids can relate to with a message of kindness and acceptance, and that sometimes you can get joy out of doing something for someone other than yourself.

Diary of a Wimpy Kid – I knew nothing about this series.  My kid brought home one of the books from the library.  Similar to Captain Awesome it is written journal style with comic pictures.  My kid read this 224 page book in two days.  I was floored.  When my kid made a bee-line to Jeff Kinney’s series at the next library visit, I decided I needed to see what this was all about.  These books are hilarious!  They capture childhood as I remember it down to that weird item in school no one would touch for strange mystical kid reasons.  I read some of the book out loud to my kids and found myself not wanting to put it down.

Star Wars Jedi Academy – Along the lines of Diary of a Wimpy Kid, the Jedi Academy novels are half novel half comic book.  They are written and illustrated by Jeffrey Brown, the guy who brought us Darth Vader and Son, et al.  These books are fun, whimsical, and focus on a character who isn’t a hero who saves the day.  Roan’s just an average kid who wishes he was in school to be a pilot but was unfortunate enough to be accepted into the Jedi Academy.  He tries to overcome his lack of skills in the Force, bullies, an array of entertaining teachers, and his own poor choices throughout each year, teaching kids you don’t have to be the popular kid or the best at everything to be a good person.

Beverly Cleary – OK, she’s an author, not a book.  But she rocks the literary world.  I loved the Ramona series as a kid because I was Ramona – the youngest sister who was more a pest to her siblings and an outcast at school than the kid you wanted to emulate.  Trying to find a series that would resonate with my child, I picked up Ramona the Pest.  Wow!  I forgot how great these books are.  Ramona the Pest was first published in 1968.  The story rings true today and nothing feels dated.  Cleary’s books have stood the test of time.  As has she – she turned 100 this year!  Some of the words are challenging for first time readers, so I did read this book out loud to my kids, but I think many elementary kids will be able to do it on their own.  And Ramona is a character that defies gender norms.  Boys love her just as much as girls.  So I say “SO THERE!” to all the haters who say boys won’t read books with female protagonists.  You’ve been proven wrong.

DragonSong – Part 1 of The Harper Hall Trilogy by Anne McCaffrey.  I read this book in the fourth grade back when I wasn’t much of a reader.  I recall being unable to put it down.  My guess, from all the Amazon reviews, is it still holds up today.  The book is about Menolly and her quest to become the first female Harper and rediscovered the legendary fire lizards.  It’s a classic (classic meaning published in 1976) that girls and boys will love.

Homecoming – Cynthia Voigt weaves a powerful story of family, loyalty, and adventure when the Tillerman children are abandoned by their mother in a shopping mall parking lot.  Thirteen-year-old Dicey Tillerman leads her siblings aged 10, 9, and 6 on foot from Connecticut to Maryland in search of a grandmother they barely knew.  I remember my 5th grade teacher reading this book out loud to my class.  We all couldn’t wait til it was Homecoming time. 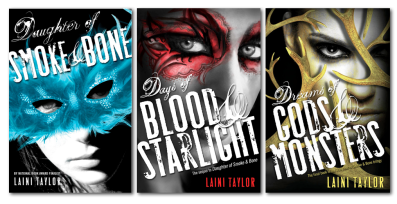 Daughter of Smoke and Bone­ – You ever love a book so much you want to eat it?  I do.  This series was one of those.  I couldn’t put it down.  And, it gets better with each installment.  The final book, Dreams of Gods and Monsters, is magnificent.  There is a scene in that novel that will stick with me forever.  It is a fantastical YA series that is completely original.  Laina Taylor’s series is the one all us YA writers wish we had written. When people say they want something that isn’t derivative – this is it.

Dorothy Must Die – This is a recommendation from my teenage niece who loved this book.  Similar to Wicked, it is a new take on the Wizard of Oz story from the point of view of Amy Gumm, the other girl that was swept up in the tornado.  Since Dorothy arrived in Oz, things have deteriorated under her corrupt control, and Amy gets caught up in an assassination plot to dethrone the megalomaniac Dorothy.

Neverwhere – I had no idea this novel was actually based on a television serial by Neil Gaiman and Lenny Henry until I started writing this.  I read the book, which follows Richard Mayhew, who just wants to live a normal life, as his life is taken from him.  No, he isn’t killed.  He just disappears.  No, not kidnapped.  He disappears – becomes invisible and watches as his apartment is rented out and he loses his job as no one can see him at work.  All this happened right after meeting a battered girl named Door.  His quest to find Door and restore his life leads him into the magical and dangerous world of London Below.

Rebecca – The 1938 novel by Daphne du Maurier stands the test of time.  I had to read this book in high school and compare it to Jane Eyre by Charlotte Bronte.  Although I am a Jane Eyre fan, I LOVED Rebecca.  It’s gothic romance at its best and a mystery teens will be wrapped up in without being bogged down by two hundred year old British writing.  It will always have its place in our literature history with the famous opening sentence: Last night I dreamt I went to Manderley again.

The Scarlet Pimpernel – One of the few books on my high school summer reading list that I couldn’t put down.  Written by Emma Orczy, the novel takes place during the Reign of Terror at the start of the French Revolution.  The illusive and mysterious Scarlet Pimpernel and his league of Englishmen devise rescue missions to save their French aristocrats from daily executions.  If that isn’t enough plot worthy of a James Bond film, add in a failing marriage, blackmail, and secret identities.