Well, Jezebels was a doozy, huh?

Hang with us for a minute while Rebecca and Chris continue our conversation about The Handmaid’s Tale on Hulu.

If you haven’t done so yet, check out our Readers’ Guide for Margaret Atwood’s book (AKA: Don’t Panic), and our take on previous episodes.

Okay, before we get to the hotel stuff, can we talk about the Nick backstory for a minute? None of this is in the novel; it’s all part of the “Gilead” created (or I guess fleshed out) for the series. What did you think, Chris? 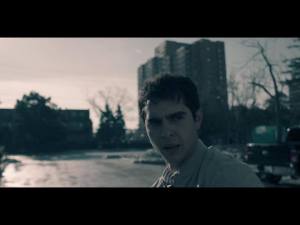 It was interesting to see how Nick got wrapped up in the Commander’s house and see him becoming an Eye.  My issue is his backstory didn’t feel like it jived 100% with where he is now.  And I don’t think the TV show has done a good job of explaining what an Eye is.  Essentially, Nick is a top-of-the-line, high up spy – even a spy against the Commander. It felt like he stumbled into this top security, covert role a little too easily.

Yeah, I gotta say, while I totally bought that he was a working-class guy indoctrinated into this lifestyle, the whole convenience factor of it seemed, well, a bit too convenient. There just don’t seem to be enough people in this world, so the same people keep crossing paths over and over again. I mean, how small is Gilead? 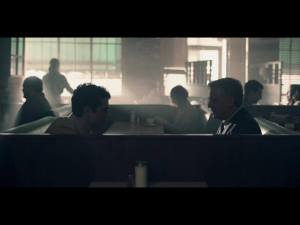 One thing I think they nailed, however, is depicting how people get sucked into these cults: lack of opportunity; feeling under-valued by society; feeling like the “status quo” will never fix the problems because they profit off the problems. And… welcome to ISIS.

Speaking of cults, let’s talk about the hotel stuff. Now, this part is in the novel, of course, but much earlier. If I remember correctly, she and Nick are not lovers yet at this point. We do get the sense in the novel that Offred (sorry, June) is afraid Nick might be judging her for her actions, and they’ve fleshed that out nicely here.

Yeah, I was wondering when we were going to see this scene.  I don’t recall her having sex with Fred during this section of the book, but maybe I missed it.

Oh, man.  I erased that horrible bit from my mind.  It was interesting to see the angst and anger from Nick’s POV.

For me, what struck me the most was the never-ending message that Offred is property. The lines that stood out were, “You’re contraband,” spoken like a giddy schoolboy about to get high off his first joint, and “We’ve got quite a collection” regarding all the women Jezebels in the room.  Women are not people.  Women have no rights.  Women once were sociologists and scientists so if you want to just have a nice talk you can, but they are property now – like a collection of glass unicorns on a shelf.  Ew.

Yeah, seriously. I don’t give a crap if they do have solar parks and no tenements. I don’t want to live in your creepy-ass world, dudes. Thanks anyway.

Yup, she totally does.  I remember that from the days with Aunt Lydia.  I’ve spent all day wondering would I choose the Jezebel life or go work in the colonies.  I really don’t know. 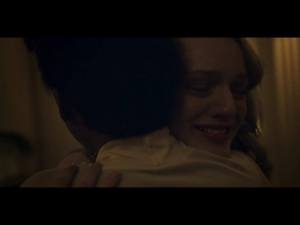 Now something they did keep from the novel was June discovering Moira at the hotel. I loved Elisabeth Moss’s reaction when she’s alone in the bathroom for a moment of just sheer, unadulterated joy that her friend is still alive. But still, it’s a double-edged sword. Really wanted that chick to make it to Canada.

We always talk about music choices with this show, and I personally loved the use of “White Rabbit” as she enters the hotel, even if it was a bit on the nose.

Ha!  I had to pause the show, turn to my hubby and ask, “Seriously?  This is the same group who did ‘We Built This City on Rock n’ Roll?'”

The gifting of the music-box creeped me out.  Not sure how to explain it.  “Here’s trash that I used to like as a little girl.  Since you are essentially a child and not worthy of anything, here is my trash because Goodwill doesn’t exist any more – and look I’m smiling because I’m SO GENEROUS.”

Mmm, actually I think that’s EXACTLY how to explain it.

There is, of course, a ghost hanging over this episode: the handmaid before June who killed herself, which we get to see firsthand now. The question seems to be hovering the whole time: Will June be driven to suicide? Which is why I was so thrilled that she got her “At least someone will remember me. At least someone will care when I’m gone” moment in the end. (AKA: I’d rather go out with a bang than live like this.)

We see that, for now anyway, she really is stronger than Nick, who breaks the rules of the society but is unwilling to truly rebel. (PS: Elisabeth Moss should stick with this acting thing, huh? Damn.) And so rounding out the episode with June in the closet, etching her own message into the closet wall next to her dead predecessor’s, was perfect.

But the irony was not lost. Her message: “You are not alone,” was the same one creepy Christian guy used to indoctrinate Nick.

Sometimes alone is better than company.

Like our Facebook page Novel2Screen for more updates on your favorite novel-to-screen adaptations, including soon to come weekly recaps of The Handmaid’s Tale and Chris’s recent interview with Jason Michael Primrose!