Welcome back to Rebecca and Chris’s ongoing discussion of The Handmaid’s Tale on Hulu. Today, we’re discussing episode seven, ie: the Luke one.

If you haven’t done so yet, check out our Readers’ Guide for Margaret Atwood’s book (AKA: Don’t Panic), and our take on previous episodes.

I didn’t even make any notes watching this episode. I was too caught up in it, and frankly feeling too claustrophobic (and that was before they shoved them in the trunk). Everything in this episode gives you that cramped, running-for-your life chaotic feeling of not being safe.

I found myself especially moved by this image…

…which seemed to be intentionally reminiscent of the notes that were hung up after 9/11 when people were looking for loved ones.

And I have to say, I’m glad they did an episode just on Luke’s POV. It was compelling and devastating. That actor (O-T Fagbenle) gave a lovely performance, very subdued, very natural. And he slayed me in the end when he read the note.

My sentiments exactly.  I turned around and hugged Sean for a long time after watching it.  Part of me was wondering if I can get PTSD from a TV show.  I needed a break from Offred because it was getting too much.  Too intense.  I’m not sure this was less intense, but at least we got to see people working together to successfully escape – outside of badass brunette.  I was bummed to see her gunned down. 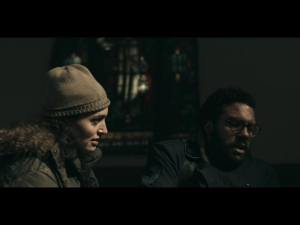 Yeah, that sucked. But not terribly surprising. She was a bit of a red shirt.

Honestly, all I kept thinking watching it was: We should go to Canada now. I’ve got our passports.

My kids don’t have passports, but that didn’t stop me about thinking of Canada.

I don’t know. Maybe this show is bad for our mental health right now. I was just thinking today about how easy it is to get fatalistic with our current state of affairs. How we need to step back from being too hyperbolic about our doom (ie: We should move to Canada right now) and instead focus on the fact that we still live in a free country, and we just need to keep our eyes on the prize of voting for new leadership.

And then I watch this and I think: Did I put the passports in the left drawer or the right drawer of my desk?

Okay, getting back to the show: I have to say I’m pretty impressed with how they’re opening up the world of this dystopian future. Margaret Atwood’s book is quite insular—it’s really just Gilead, which we understand is a part of what used to be the United States. So the writers here have had their work cut out for them to create a whole universe around Gilead. Last week we saw the Mexican ambassador and got a bit of info about the drought (both fruit-wise and womb-wise) down there. Now we’re learning a bit about Canada. 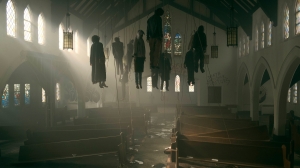 Yes, we’ve gotten a slice of the countries to the north and south, but the one thing I pondered on the most was life outside or on the edge of Gilead.  Where are the boundaries?  Why did they hang people in a church and abandon a town?  Are they hoarding everyone in a certain area of Gilead for control?  Was the church not in Gilead?  Some outskirts?  If it isn’t in Gilead – who runs that land?  How come the Guardians can still hunt them down out of Gilead territory?  I had so many questions about the nether-region between Gilead and Canada.  And why are men allowed to remain who they are and live where they are but some are turned into the Nicks of Gilead?  So many questions.

Yes, fantastic points! I think it was pretty clear that the house where they were waiting for their passports was inside the Gilead boundaries, just south of Canada. But what happens if, say, they go to Wyoming? Is that part of it? Or California?

Maybe we’ll find all this out in the next couple weeks?

Oh, before we go, we’ve been talking a lot about the music choices in this adaptation. I loved the closing song: Cigarettes After Coffee’s Nothing’s Gonna Hurt You, Baby. What did you think?

I loved the closing song but didn’t know what it was.

Did you see the SNL skit, though?

Okay, well, we’ll tune in next week to see what happens with Luke in Canada, and what the story is the with blonde woman he’s living with now. (PS: You think they’re just roommates or are they—never mind, that’s a stupid question.)

Till next week, then.

Like our Facebook page Novel2Screen for more updates on your favorite novel-to-screen adaptations, including soon to come weekly recaps of The Handmaid’s Tale and Chris’s recent interview with Jason Michael Primrose!