Please note, the following article may contain spoilers for those not familiar with the books or haven’t watched the show.

Is it just me or is this parabatai thing looking really risky?  So far I think we’ve seen one moment where Alec and Jace have used it to strengthen their abilities – with the staring contest from Raising Hell.  But by all appearances being a parabatai just ups the possibility of death for a Shadowhunter.

In Parabatai Lost, Alec is “slipping away” because part of his soul is lost, wandering somewhere in the in between, looking for Jace.  Lately it seems like we see a lot of Alec lying down, sacrificing himself in bed for Jace.  I’d rather see him with bow and quiver in hand and with his eyes open.  (Have you seen Matthew Daddario’s eyes?  They should remain open at all times.)  While Alec sweated, Jace had his ass handed to him by Maia and the wolves.

Yeah, that’s right.  Maia made her entrance.  Although Alisha Wainwright looks the part, her conviction wasn’t there. 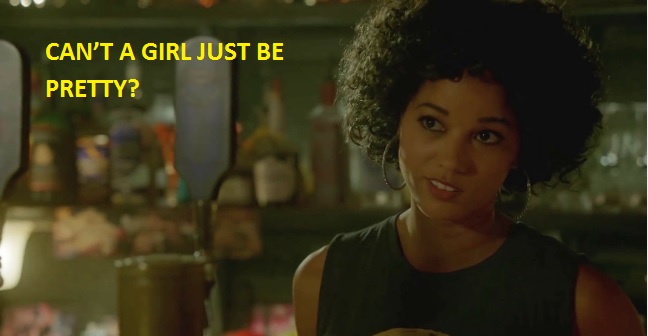 Granted, she may settle into the role as Katherine McNamara has for Clary.  I don’t know if it is Clary’s shorter hair, more natural make-up, or if it is an easiness Katherine is bringing to the role now that Season One is a notch in her belt, but Clary feels more like the Clary we know and love from the books this season.  There’s an innocence in Katherine’s portrayal that wasn’t there last season.  Part of this could be the fact that Clary isn’t instigating anything.  She is forced to react to every situation thrown at her (Valentine brainwashing Jace, Aldertree suspecting her, Simon needing a friend), which she is overwhelmed about – rightfully so.  But recently she’s felt natural as Clary, imo.

There were moments in Parabatai Lost where I felt a bit lost myself.  Jocelyn’s 180 turn from firing an arrow at her son to amazingly knowing Jace would run up the stairs at the hospital vs. down and should wait at the door ready to help him strained my suspension of disbelief.  But overall the episode was enjoyable.

In fact, my favorite shots from the Season 2 trailer were in this episode!  Clary stalking through The Institute.  Jace washing up on shore.  Jace getting thrown through the Hunter’s Moon window.   Man, that sucked.  That window was really nice.

Through the parabatai drama, our side characters kept us laughing.  There were some great lines in this episode.  My favorite exchange was when Alaric was examining Gretel’s corpse on the shore and said, “She was a sweet kid.”  Luke responded, “No, she wasn’t.  She was a giant pain in my ass.”

Second favorite line was from Simon as he explained to his mom why he didn’t call.  “My cell phone died, among other things.”

I also thoroughly enjoyed the restaurant scene with Simon’s mom, Simon, and Raphael.  When Raphael strolled in from the shadows I instantly cheered.  Raphael has a heart!  He maybe a manipulative and arrogant vampire, but he’s looking out for Simon.  He’s helping him cover for his mom by pretending to be his band manager.  And right when I was all Team Raphael, he manipulates me.  He wasn’t helping Simon but helping himself, and then there was the menacing moment when he unctuously accepted her hospitality that he’s welcome at her home.  Oh no.  That’s Buffy 101 – never invite a vampire into your house!

Like our Facebook page Novel2Screen for more updates on your favorite novel-to-screen adaptations, including weekly recaps of Outlander and Shadowhunters and interviews!