Please note, the following article may contain spoilers for those not familiar with the books or haven’t watched the show.

I thoroughly enjoyed A Door Into the Dark.  Granted, I had a beer while watching the show after a rough day on deadline at work, so I may have been influenced by a hoppy red, but I thought tonight’s episode was a great night for Jocelyn (Maxim Roy) and Clary (Katherine McNamara).  Mother/Daughter tension, fights, and conflicting hair color delights.  I was starting to get the sense that Clary lightens her hair just to piss off Jocelyn.  I think this feud goes back at least 5 years.

In all seriousness, I did think Katherine and Maxim pulled off great performances.  I enjoyed seeing the vulnerable side of Clary, which we honestly haven’t seen in the series yet.  Clary of the show pretty much hit the ground running ready to be a Shadowhunter and believing in this world faster than Clary of the books.  But tonight we saw her cry, not strained tears over Jace, not frustrated tears about Alec’s disgust for her, but tears over the life she lost – the life she loved.  Izzy was there to focus her back to Circle members and all things Clave, but Clary had a legit breakdown.  And about time!  I always appreciate when writers remember where their characters came from and allow the characters to remember that too.

In fact, the whole episode was ripe with the past.  There was the small mention of Clary and Simon’s dealings with the token ass clown of high school.

Jocelyn had a lovely moment where I truly felt her pain of losing the son she loved to the dark side.  As a mom and certified Star Wars geek, I can relate.

Luke brought out yesterday’s trash when he basically pulled an “I told you so” on Jocelyn for keeping so many secrets from Clary and him.

Alec told Clary in more words to eff off, blaming her for everything negative that has happened since she arrived.

Even Magnus went down memory lane repossessing stolen items from Camille and their sordid past.  Heck, Dot appeared from the dead!

Some scenes and plot devices could’ve been tightened up.  Dot could’ve been utilized better.  The whole casting a spell on Clary to manipulate Jace when he probably was gonna do as he was told anyway seemed like wasted screen time that could’ve been spent more on Alec shirtless.

But how can I complain?  We are only two episodes into Season 2 and Matthew Daddario has found a way to remove his shirt in both episodes.  I knew there were positive sides to this whole separated parabatai thing. 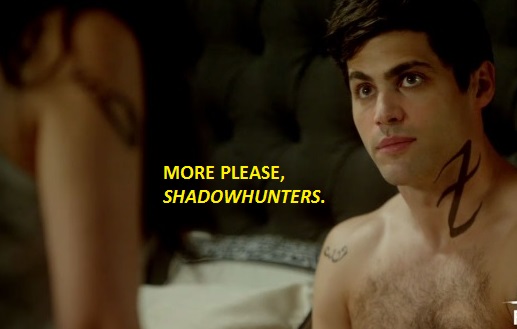 I leave you with this one thought about The Institute though.  Has anyone noticed how identical it looks to the headquarters in 22 Jump Street?  Now there’s a crossover I’d watch!

Like our Facebook page Novel2Screen for more updates on your favorite novel-to-screen adaptations, including weekly recaps of Outlander and Shadowhunters and interviews!