Yesterday Matthew Daddario went live from his trailer during a shoot of Shadowhunters Season 2.  I stopped and watched because it was a good excuse to stare at his gorgeous face for 17 minutes.  Fortunately, those that did watch got more than his sparkling eyes but also enjoyed his sense of humor and information about the upcoming season!

Matthew started his Live feed lamenting his forgetfulness with his pumpkin.  He was supposed to bring a pumpkin to set, but three days in a row he forgot.  It’s tearing him up.  “It’s a difficult thing for me to deal with – the loss of this pumpkin,” he said. 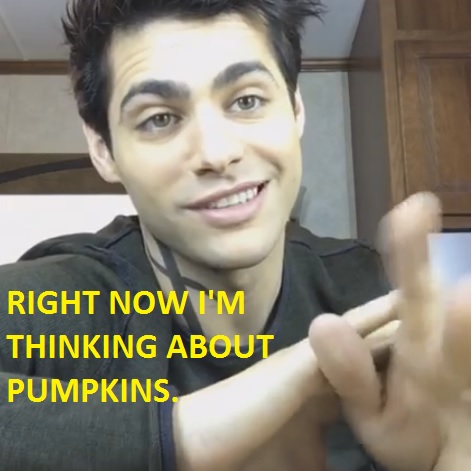 He eventually pulled himself together to talk Shadowhunters.  He said things are emotional between Alec and Izzy this season.  In fact, all the characters are emotional and “off in general.”

When it came to Malec, he said, “[It] comes out fast, and it is an aggressive move forward.  I hope you guys don’t get overwhelmed with it.  You’re gonna like it!  I can’t tell you that much.  I feel like I gave away too much about the trajectory.  I know you read the books.  Things are slightly different…sort of…not really….they are.”

OK, Matthew.  Thanks for the insight.  Kinda.  Sorta.  Not really.

When it came to his favorite food, the heartbreak of pumpkins returned.  “I like a lot of things.  Right now I’m thinking about pumpkins.  I like pumpkin seeds.  You lay them out; you put them on a pan; you heat them with some salt and maybe some curry.  It’s real good.  Real good.  I’m tellin’ ya.”

He confided that shooting an arrow is a lot easier than you think it is.  So there, Katniss.  And that the relationship between Alec and his mom remains tough.  He also believes you can’t hate things about yourself; therefore he doesn’t hate anything about Alec.  “You have to work on them and be better.”

He also confided that Harry Shum, Jr. would make the best Shadowhunter. Doh!

When asked if he could time travel where would he go, he said that’s a tough situation.  “There are so many places I could go back and I’d probably get killed or die of disease.  That’s kinda tough.”

He’s planning to be a big pumpkin for Halloween.  Of course.

But the most interesting answer Matthew provided was in response to one fan who asked if Alec and Clary will have more of a friendship.  Matthew said, “Yes, in a way…you guys can review that in three months.”

He didn’t elaborate, but he hopes that in future seasons there will be more blooper reels, but right now the crew isn’t allowing for too many bloopers due to the tight schedule.  He has plans to change that.

And he wants fans to know that any kind of pumpkin will do – even a cat named Pumpkin.

Thanks for the insight, Matthew, and for your love of all things pumpkins.

2 thoughts on “Matthew Daddario and His Pumpkin – SH Live”