Hello, loyal readers (read: those people who aren’t sick of my little guessing game about season three yet). Thank you for hanging in there. I hope it’s still fun to read. After all, that was kind of the point.  Well, that and the vague hope that some New York literary editor would discover my blog, share it with all her friends, decide I’m a genius, publish my novel, invite me to some swanky party in Manhattan where I would meet Ron Moore (again), who would be so smitten with my charm and my adorable Outlander blog that he would offer me a job.

Let’s talk about episode eight. Now originally, this episode was going to pick up right at the beginning of Part Nine of the book (Worlds Unknown). And we’re still going to do that, but as those of you who read last week’s blog know, I couldn’t quite cram all of the action of the end of Part Eight of the book into episode seven.

No matter, we are nothing if not flexible. And as it turns out, the action at the end of Part Seven actually informs the drama of the opening of Eight quite nicely. Namely, we will start with life… and end with death. Which feeds into the theme of the week: Enslavement.

There are many types of enslavement in this book, of course (as you know from my first Voyager Article). But this week, we will specifically be talking about the innate human state that we cannot escape: our enslavement to our own “mortal coil.”

THEME: Enslavement (natch). Literal enslavement (Temeraire) serves as the backdrop to Jamie and Claire’s metaphorical enslavement (the horror of not being able to find Ian; the realization that Jamie’s true identity as a smuggler has been revealed, meaning he can never go home again).

END OF PART EIGHT: ON THE WATER:

Jamie feigning a French persona to lead a troop of French soldiers to the beach and reuniting with Claire; Fergus and Marsali being “officially” married by the bat-brained Father Fogden (and Fergus taking Jamie’s surname in a particularly sweet moment).

The final section includes: The Artemis taking on the cargo of bat guano in order to A: make some pocket money and B: complete the illusion that they’re a trade ship; Claire inadvertently buying a one-armed slave (Temeraire- The Bold One); the first mention of “Mrs. Abernathy of Rose Hall, Jamaica,” who may or may not know something about the kidnapped Ian; the fabulously dramatic scene in which Jamie must crawl into the pyre of burned slave corpses to see if Ian is among them.

Let’s pick up where we left off:

Jamie is looking over the rail, wondering if Claire is dead. And now along comes Annekje Johansen with her goats (for it is goats, not chickens, as I mistakenly said last week—thanks for that catch, I Love Outlander), and she informs Jamie that Claire is alive and she dove off the ship towards shore.

CUT TO: Jamie doing the same thing, with Annekje’s help. The water takes him, but it’s more forceful than he had anticipated. He almost drowns. By the time he is washed ashore, he is clinging to the brink of consciousness.

Meanwhile, Claire is helping the crew of the beached Artemis make repairs. Fergus attends to Marsali, Father Fogden is there, Lawrence Stern. Basically everyone but Jamie. Claire looks out to the sea. Where the hell is Jamie?

Jamie comes to, being teased by young French-speaking Haitian children. Answering them in French, he begins to figure out where he is. They point to a nearby garrison of French troops, and Jamie gets an idea. 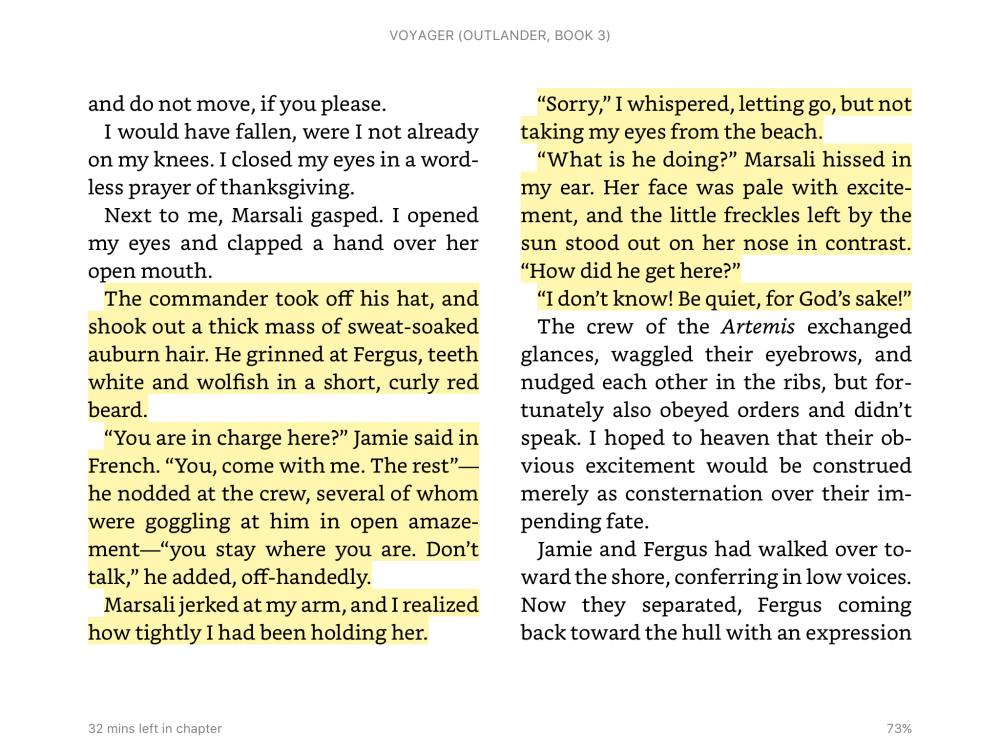 Okay, so the drama is resolved, Jamie is safe and sound.

Jamie is introduced to the father and hears the backstory (which we didn’t get to last time) about his dead wife. We see all the beautiful dresses his late wife left behind. And now that we’re in her bedroom, let’s have young Marsali, who’s been deprived of the nice things she’s used to, longingly touch one of the dresses.

And I’m going to go ahead and make it Claire’s idea to go suggest something to Jamie. She whispers something in his ear. He looks surprised at first, but then agrees it’s a good idea. And we cut to…

Father Fogden officiates the “real” wedding of Marsali (in one of the pretty dresses) and Fergus. It’s a beautiful scene, and as they recite their vows, we see Jamie and Claire, standing by their sides, looking at each other and smiling. It’s almost like they’re silently renewing their vows themselves.

Cue the hankies. (Man, I love this scene. It’s going to be really beautiful with the whole “Haitian beach at sunset” thing going for it.)

Okay, so now that we’ve reaffirmed the beauty of life, let’s talk about death. Sorry.

Let’s BREAK INTO TWO, as they say.

The Artemis is repaired, and is hired to haul a load of bat guano, as stated above in the book chapter summary.

On board, Jamie describes his plan: the day before, he had gone to the Masonic lodge in Bridgetown and passed himself off as a member of the brotherhood, asking for any word of what happened to Ian. They suggested trying the slave market.

Now this episode is kind of sorely lacking a B story at this point, so I’m going to make a suggestion. We have three characters who we’re going to be meeting again quite soon, and I’d like to show their progress at this point. Who are they? John Grey, and Reverend Campbell and his sister Margaret. (Of course, we’ll soon be meeting some other familiar faces, but we can’t give that away just yet.)

So if I were Ron Moore, I’d flesh this episode out by showing John Grey arrive in Jamaica, asking again about the fate of Claire. As a gentleman, he first and foremost wants to make sure Claire made it to shore alive, and feels a responsibility for not having protected her better. But of course, there’s another motivation: If Grey finds Claire, he’ll also find her husband.

Meanwhile, two other people step off a boat: Campbell and his ill sister. These two don’t have a whole lot of business that we need to know about yet, but I think it’s important to show them here. We haven’t seen them in several episodes, and audiences are likely to forget who they are if we don’t check in with them from time to time.

Besides, it’s always fun to see what DEFCON level of crazy Margaret is at. Today, I’m going to call it DEFCON TWO (that’s the one just before nuclear war).

Okay, let’s get back to our heroes at the… 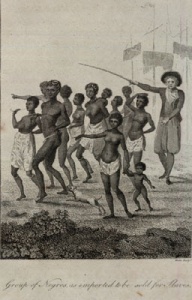 And it’s awful. Just horrific. Honestly, this is going to be a tough scene to shoot—tough for the actors emotionally, tough logistically just because so many people are involved. But this is the kind of thing that Outlander really excels at—those big production scenes with a hundred extras and huge emotional stakes.

Our crew makes their way through the slave market, and they are all disgusted. But Claire in particular, perhaps haunted already (as she will be more later on) by memories of her dear friend Joe Abernathy, is overcome with anger and revulsion. 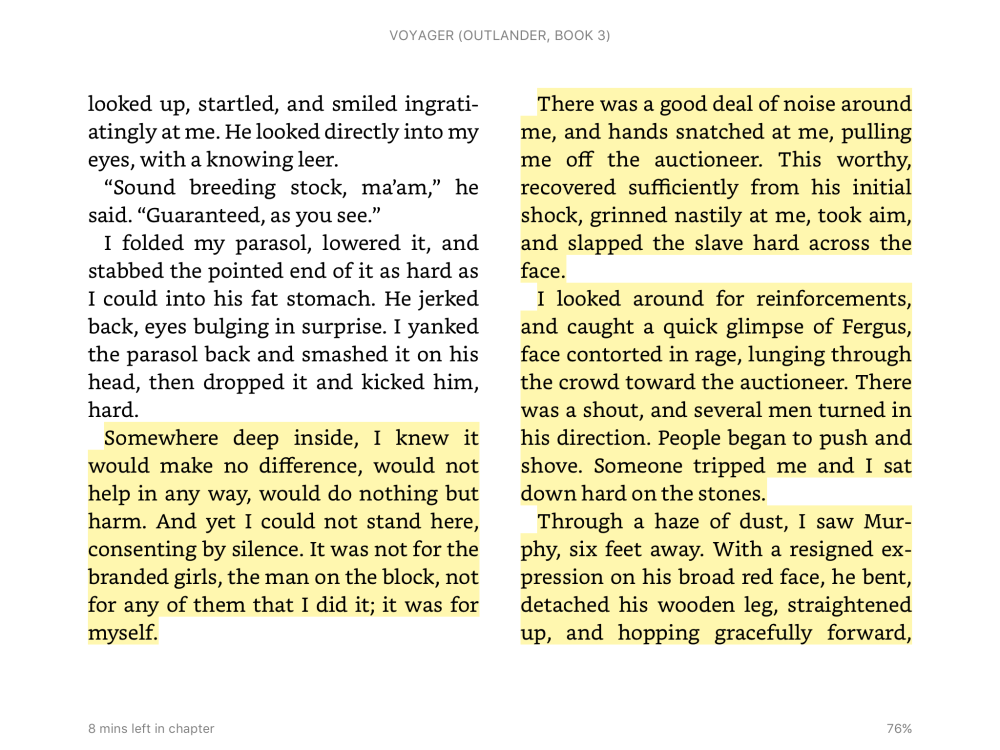 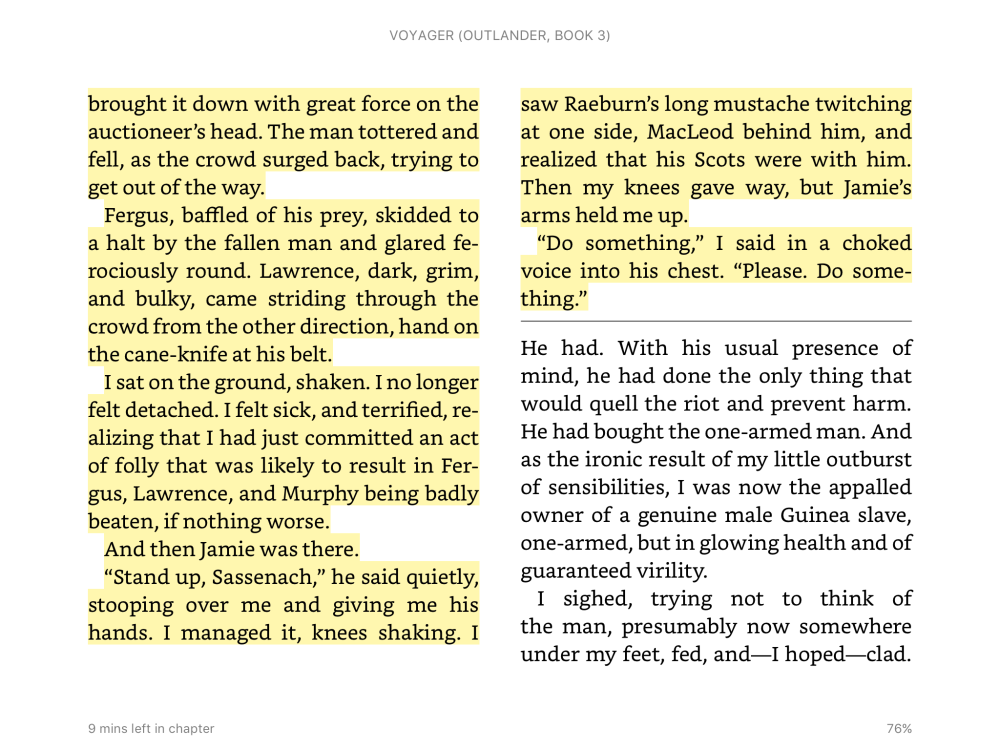 And of course, Jamie does “do something”—he buys the slave. Claire is now the rather self-disgusted “owner” of a man named Temeraire. But she doesn’t have much time to deal with that, because Jamie is having his own crisis:

Ian Jr. isn’t there. There’s some word that he may have been shipped off to Jamaica, possibly to an owner named “Mrs. Abernathy of Rose Hall.” (If Claire catches the coincidence of the surname being the same as her friend, she doesn’t let on about it now.)

But of course, before they can head for Jamaica, more bad news:

Some of the bodies of those who died onboard the ships have been burned in a nearby pyre. Claire says what they’re both thinking: “We have to at least check.”

At this point, our poor Jamie is on the verge of a meltdown. He can’t find Ian Jr. He’s not even sure if this whole thing is just a wild goose chase. And even if he does find Ian, he doesn’t think he can ever go home again. (Remember, his identity was discovered when he was spotted on the deck of the Artemis by the Porpoise’s crew.) It’s all too much for him, but Claire gets him to focus.

With her help, he finds the strength to climb into the pile of dead bodies and look for young Ian.

Claire can only stand by and wait, along with Willoughby and Fergus, while Jamie disappears into the mass of burned limbs. The stench is overwhelming. Their eyes water from the heat and the smell.

And finally, a figure emerges—a blackened man, overcome with grief from his horrible task.

It is Jamie, who confirms that Ian Jr. was not among the bodies of the dead.

Claire tries to comfort him, but he’s not ready to be touched.

Claire, Jamie, their crew, and Temeraire make their way back to the ship, walking in sad and bleak silence.

I know, I know, kind of a bummer episode. It’s slavery and death, folks. No one said these themes were easy.

And that’s it for us this week. Next week, more ships, more pirates, and more magic Willoughby medicine. Oh, and more sex. I promise, more sex. I think we’ve earned it. 🙂

*PS: I have no idea why Caitriona painted pirate makeup on Sam for ComicCon, but it seemed like an apt photo for this week’s action, so there you go.

This article has been the eighth in a 13-part series. To read part 9, click here: Voyager: “Mock 9”

Miss Peregrine’s Home for Peculiar Children opens next week and our book review is up.

Girl on the Train opens October 7. We’ll repost that book review before then as well.