Welcome back to our dissection of Voyager and our game of guessing how the novel will become season three of the Starz show! Needless to say, this discussion is intended for people who have read the book, and don’t mind spoilers.

Before we begin, I think we can finally clear up a little confusion: namely, will season three be 10 or 13 episodes? (Ron Moore told the Hollywood Reporter on July 9 that the plot was broken down into “10 episodes,” which freaked everybody out a bit.)

But good news! Speaking to ibtimes.co.uk on July 12, producer Maril Davis confirmed that the new season will be 13 episodes, which works out well for me because I’ve already done a bunch of work with this model in mind! Also, I had absolutely no idea how they were going to get all that story done in just 10, so this is a good thing for everybody. Apparently, what Ron meant was that the first 10 episodes were already broken down plot-wise, not that there would only be 10. Whew!

Maril also confirmed in that interview that they will be keeping Jamie and Claire separated for a bit to give a sense of time passing. But I would be very surprised if they really kept their leads apart for more than an episode, as we discussed last week.

Okay, so we’ve already taken a look at “Mock One,” as I called it, AKA: If Rebecca were Ron Moore, how would episode one go? In my world, episode one ended with Jamie leaving Ardsmuir Prison on his way to Helwater and Claire about to walk through the stones in 1968.

As discussed, in the interest of giving our leads equal screen time, I believe much of Jamie’s backstory during the time of their separation is going to be moved to other episodes, trickled out to us as it becomes plot-pertinent. So even though we left Jamie on his way to Helwater, we are now going to skip ahead a decade to 1766. (Don’t worry, we’ll get to Helwater later.)

So without further ado, let’s take a look at Mock Two:

THEME: THE DEVIL YOU KNOW. Claire and Jamie discover how they have changed in 20 years, and must decide if they still love the people they are now.

THE FIRST HALF OF PART SIX: EDINBURGH:

This section begins 27% of the way through the book, but it is where the real-time story (ie: not flashback) really starts. It includes Claire and Jamie reuniting; Claire showing him the pictures of Brianna; the introduction of Mr. Willoughby; the whorehouse; the stuff about being a rum smuggler; the introduction of Ian Junior; the revelation that there is an “Edinburgh Fiend”; the fire breaks out… (to be continued)

In a bit of a nod to the beginning of episode one, in which Jamie lay writhing in pain in a Scottish field, we now see CLAIRE doing much the same thing.

She has just passed through the stones. She struggles to catch her breath, looking around to confirm that the electrical lights of Inverness cannot be seen.

She sees a caravan passing and hitches a ride.

Claire arrives and finishes her peanut butter sandwich. She watches the Saran wrap float away.

Later, she arrives in town and finds the sign hanging over his print shop.

JAMIE is setting type. Claire enters and Jamie passes out. And because Ron Moore is not an idiot and doesn’t want riots in the streets, the rest of this scene will probably progress very much like in the novel– some crying, some kissing, and the eventual interruption by Geordie.

Now in the book, there are two scenes that serve similar purposes: the one upstairs of the print shop and the one in the private room at Madame Jeanne’s a bit later, both of which are designed to bring Jamie and Claire closer together. This being only a 60-minute television show, however, we’re gonna go ahead and consolidate a wee bit. So let’s cut to…

…where our heroes will rescue Willoughby, the Chinese man whom Jamie has essentially adopted, and whisk him away to…

The night of debauchery at Madame Jeanne’s progresses much as in the book. By the time Jamie has gotten Claire up to his private room, she’s already wondering if she’s made a huge mistake. Why does he have a regular room at a brothel? Who the hell is Willoughby? How exactly is he earning a living, because it sure as hell isn’t by printing leaflets?

Jamie counters with his own questions: Why is she back? Is she staying this time? And for my money, you can’t do too much better than this bit of dialogue from the book: 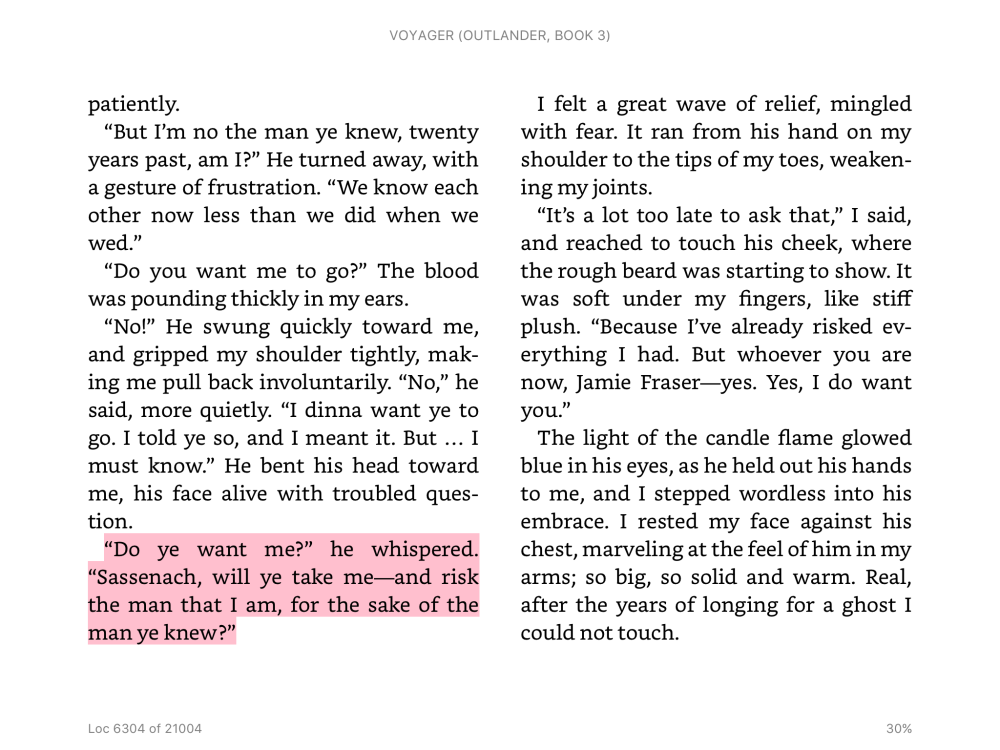 Okay, so long story short: as all couples know, you’ve got to have a big fight before you can have make-up sex. By the end of the fight, they’ve both calmed down. The questions aren’t all answered, but the trust is coming back.

Jamie asks about Brianna. “Can you draw her for me?” And Claire says, “I can do better than that.” She shows him the pictures she has brought with her. It is a moment of intense connection, which ends with awkward but loving sex, and their reunion is now set.

So now we maybe have a tender moment in the night where Claire watches him sleep and sees the new scar on his leg. He whispers “Culloden.” She lies in his arms, promising never to leave her again.

Okay, this takes us about a third of the way through episode two. Now let’s have some plot, shall we?

In storms Ian, Jenny’s husband, looking for his son Ian Jr. He sees Claire in the bed, mistakes her for a hooker at first, and then Jamie reintroduces him to his wife (which nearly gives Ian a heart attack). After Ian leaves, Jamie goes off to “do some business,” and a few minutes later, who should come in but Ian Junior himself?

Okay, this is all quite similar to the book so far, but here’s where we’re going to skip ahead a bit. In the book, Claire goes to have lunch with the hookers and there’s some aimless wandering around, lah dee dah. Yeah, we’re skipping all that. We’ve got some plot to set up here, people!

Willoughby fighting with the exciseman. Now in the book, lots of things that on the surface have little to do with each other all happen around the same time: Claire learns that there is an “Edinburgh Fiend” raping and killing women; Fergus shows up and sees Claire again (and she sees that he’s lost his hand); and Willoughby kills the exciseman (or at least, they assume he’s an exciseman, coming to rain on Jamie’s little booze-smuggling operation).

I’m going to go ahead and say that we need to give these activities more of a cause-and-effect relationship. Also, Fergus needs a cooler reintroduction.

So how about this? Claire is drawn out of her room when she hears a woman screaming. The body of a dead prostitute is being brought down the hall by two guards. Another prostitute tells Claire that the “Edinburgh Fiend” got the woman, that he’s on the loose and they should all hide in their rooms.

But now Claire hears Willoughby fighting with a man. He’s pissed drunk, as usual. She runs up and sees him waving a gun. “Is that him?” she asks. “Is that the fiend?” Willoughby says, “No, that tax man.” Suddenly: A HOOK COMES DOWN around the Willoughby’s neck, warning him to keep his cool. But now Claire’s eyes grow huge.

Fergus, shaken to the core at the sight of her, drops his hook from Willoughby’s neck long enough for the Chinese man to shoot the offender. As the man lays bleeding to death, Jamie arrives. “Why are the girls screaming?” he asks. And Fergus tells him that the fiend got another one.

Fergus says they need to hide the body and Jamie tells him that’s not all they’ve got to hide. He’s got a shipment of illegal rum waiting in the alley. So Fergus suggests they kill two birds with one stone.

Cut to Claire freezing, half naked, blood all over her, as Jamie tries to hose her off with icy water. Meanwhile Fergus and some other men stuff the body of the exciseman (or whatever he is) into a barrel of cheap rum.

Claire now sees exactly what it is Jamie does for a living. Once again, he gives her an out. If she can’t handle who he’s become, he’ll take her back to Craigh Na Dun. She’s freezing and angry, not that he’s a smuggler, but that he still doesn’t trust her to stay with him. “Now get me another bloody dress before I freeze to death,” she insists.

Okay, so the rum is taken care of, the dead man is concealed.

And we’ve bit off quite a bit of story already in this episode. Frankly, I’m not sure if all this will really fit into just 60 minutes, but before we go, there’s one more thing that needs to happen:

After much chaotic screaming, it starts to become clear that there’s a fire somewhere in town. And the fire is at a printing press.

So they all run for the press and see that, sure enough, it is on fire. And as Jamie joins the men fighting valiantly to put it out, Jamie and Claire see a familiar head peeping out of the top window: Ian Junior.

How did the fire start? How did Ian Junior get up there? Will they be able to save him? As they used to say in the serials, folks, “Tune in next week to find out!”

Okay, so that’s my take on episode two. It’s pretty true to the book because, really, what Diana wrote in this sequence was very cinematic. It’s the nice thing about adapting something that works so well on the page– you don’t have to do much to it to make it work onscreen!

What do you guys think? Did I leave out anybody’s favorite bits? Or are we all just waiting to see what happens when Jamie takes Claire back to Lallybroch? Hmm, stay tuned for that bit of drama, coming up soon!

Until then, have a great week.

This article has been the second in a 13-part series. To read part 3, click here: Voyager: “Mock Three”