Thursday night was the premiere of Queen of the South on USA Network, although you may have thought this show had already been on for a while due to all the publicity and hype.  Or because it was – on Telemundo as a wildly successful telenovela La Reina del Sur.  USA Network decided to adapt the book by Arturo Pérez-Reverte again for TV but this time for English-speaking American audiences.

The novel Queen of the South is the rise of Teresa Mendoza from the marked girlfriend of a dead Mexican drug-runner to the queenpin of Gibraltar.  The show now airing Thursday nights on USA at 10/9C will do the same, but the show apparently will not take place in Spain.  It also appears to differ greatly from the novel when it comes to characters and how Teresa reaches to her final life of luxury.

Much of the publicity for the show has focused on the strong female characters.  Many of these were made-up for the show.  Teresa is Teresa, and so far her character played well by Alice Braga is faithful to Pérez-Reverte’s vision.  However, there are few female characters in the novel besides her.  There is Patty O’Farrell, an aristocratic lesbian Teresa shares a cell with in prison, who hooks them up with the Russian drug ring in the peninsula, but that is where the female characters end in the book.  There is no Camila Vargas (portrayed by Verónica Falcón), the ex-wife of a Mexican druglord Don Epifanio Vargas who moved to Texas to take control of their drug trade.  There was no girlfriend (Justina Machado) in Mexico Teresa saves from being killed.  I applaud the creators recognizing the heart of the story – how a woman with odds constantly stacked against her can climb to the top with brains instead of beauty – and capitalizing on it by creating more female characters with strength and complexity.

However, the change in location and the change in characters will inevitably change how the shows unfolds compared to the book.  The phone call and the rape scene were the only scenes in the pilot that felt taken from the novel.  I almost put down the book due to the opening rape scene for a laundry list of reasons, not the least of which is these scenes or over used in novels without any real understanding of what rape is and how it affects the victim.

The rest of the show was its own creation.  In the novel Don Epifanio Vargas helps her escape to Spain.  In the show his character, portrayed by Joaquim de Almeida who you will recognize Immediately from Desperado and more, is determined to kill Teresa, a change based on the fact that the TV show creators have decided to pit his ex-wife against him and use her as a role model for Teresa, which I’m on the fence about.  Again, kudos for creating significant roles for women on TV, but Teresa navigated the drug world by her own intelligence, not mentors.

Honestly, my only disappointment with Queen of the South is the location.  The actors are great.  The action moved along well.  I have a feeling this will be a strong show for USA, as do they since they’ve already shot a whole season.  But by changing the location so much of Pérez-Reverte’s original story gets manipulated and lost.  Part of the appeal of the novel is that it takes place on the coast of Spain, a location not seen often in American films – or at all in TV.  The novel has motorboats, open seas, coastal caves, Moroccans and Russians and the Irish.  There’s an inherent romantic element to the novel’s setting that feels lost in the show.  Granted, I’m only going off of the first episode, but if the show takes place in Texas and was shot in Dallas, I’m thinking desert will be the primary backdrop.  No stunning camera shots of the Mediterranean Sea.

My issue is I’ve seen Texas.  I’ve seen it in person.  I’ve seen it on film.  It’s not new or interesting.  Based on production value, it makes sense to shoot in Texas.  High sea motorboat chases get costly after a while.  There have been countless films and shows about drug cartels along the Mexico/USA border.  Been there, done that.  What I haven’t seen is the drug cartel story of Gibraltar.  Guess I won’t.

However, IMDbPro claims the show was also shot in Spain, so maybe we can keep our fingers crossed.

Also, I don’t mean to get political in a review, but I can’t help but point out that in the year of an election with one candidate who claims all Mexicans are rapists and drug dealers that perhaps setting Queen of the South along the Mexican/Texas border is just perpetuating an untrue stereotype.  OK, I’ll leave it at that. 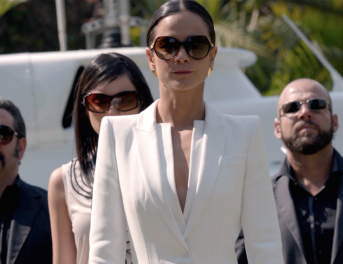 Oh, yeah, one more thing.  The doppelganger is a literary device that Pérez-Reverte uses throughout the novel.  It doesn’t work for the show.  Seeing Teresa’s flashy future business self speaking to her pulls the audience from the emotion of the scene and feels hokey at best.  Nice try for attempting to keep an element of the novel intact, but it would’ve been better to just keep the novel intact and get rid of Teresa’s visions of herself.