Welcome to our second installment of What We’re Reading – How ‘Bout You?  It’s our virtual book club, and Rebecca (in purple) and I (in green) have some great books to tell you about. 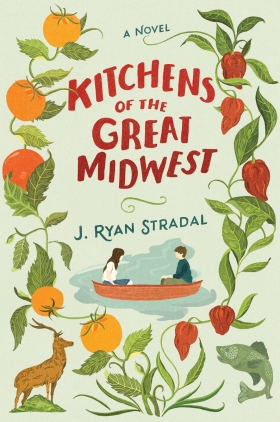 Kitchens of the Great Midwest – by J. Ryan Stradal

I fell in love with this book.  I’m not a fast reader but found myself reading 30, 40, 50 pages in one sitting, and not because it has a plot that keeps you on the edge of your seat but because it is a beautiful, honest collection of characters and moments in life.  It’s a novel, but it’s almost like a collection of short stories that tie together these multi-dimensional characters with a heavy Midwestern food focus – if you couldn’t gather that from the title.  There’s even recipes in the book!  I had no idea how important a copper bowl was.  Between Kitchens of the Great Midwest and my latest Bon Appetite telling me this is essential for baking, I’m a click away from ordering one on Amazon.

What makes this novel so great is everything in it.  The writing is masterful.  Stradal creates characters that you despise one moment and are suddenly rooting for two pages later.  You’ll fall in love with them because they are you.  I could relate to every single one, even Pat (the hypocritical Christian), and Octavia (the judgmental epicurean).   Two things I don’t classify myself as – being agnostic and planning meals around a preschooler’s palate (although my co-workers probably call me a food snob behind my back).

Each chapter is a story, or moment of life, that we all can relate to.  Stradal takes us on a journey from childhood to first crush to young adult scares to adult struggles and death, weaving the peripheral characters into the story arc to become central characters you’re championing for.  If you are looking for a fast read with a ton of heart and comedy, pick up this New York Times bestseller.

Up to this Pointe by Jennifer Longo

I remember my old acting teacher telling this story once: He said he had no idea what led him to walk into the theater to see Field of Dreams, since he had no use for baseball, and as far as he knew, that’s all the movie was about. But he sat down in his seat and immediately started crying. The movie had just begun. Hardly a sissy, he couldn’t figure out what the hell he was crying about.

And then he realized the movie was about a guy trying to connect with his father… who had been dead for years and never understood him.

Oh. So that’s why I’m here, he realized.

I had a similar experience with Up to this Pointe, an odd duck of a YA book about a girl who has spent her whole life training to be a ballerina, and then realizes at the ultimate moment that she simply isn’t good enough. (And then she goes to Antarctica for reasons that you’ll have to read the book to find out about.)

The main character, Harper, has lived her whole life according to the “Plan,” in which she and her best ballerina friend will be dancers with the San Francisco Ballet and share a cool apartment in the Presidio District. And to add insult to injury, just as Harper finds out she’s not going to make it, her best ballerina friend gets an offer from not one, but three different companies. I think I actually made the “ouch, that stings” face as I read that part in the book.

I studied acting from eight to 24. It was all I ever wanted. I planned my life around it, much like Harper. I planned college around acting—desperately wanting to go to NYU, but settling for U of Wisconsin when I realized what NYU cost.  The day I graduated, I turned in my gown and mortar and walked across the street to where the U-Haul was packed and waiting to carry me and my big dreams to LA.

I joined the acting class that I was told was the best and I got the headshots I was told “you absolutely have to have if you’re serious” and I got my hair highlighted and my nails buffed and I met with every agent who would give me the time of day.

And they all said no.

Harper mentions the odds; only .003% of women in the world are good enough to be professional ballerinas. The odds haunted me too– the odds are not in your favor. And I’ve always been just a little bit too good at math.

All of this is a long way of saying I really liked Up to this Pointe. I got Harper. I got her heartbreak. I had a Plan, too.

I’m older now, and I’m looking back on it all with the benefit of hindsight, and I realize, just as Jennifer Longo does, I’m sure (because the ballerina part, we find out in the Afterward, is biographical), that it’s okay. Dreams don’t die, they just spark new dreams. But when you’re young, when it’s all you’ve ever wanted… well, so that’s why I picked up this book. 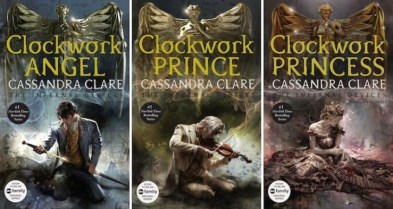 I’m gobbling up the last of Cassandra Clare’s The Infernal Devices series.  This is a prequel of sorts to The Mortal Instrument series that has been turned into Freeform’s hit series Shadowhunters.  Set in 1878 London, it reminds me of The Alienist but with fantastical characters and more humor.   It centers on Tessa Gray who seeks shelter at the London Shadowhunters Institute when her life is in jeopardy by a deranged madman and his army of metal men.  What it really is about is the love triangle between Tessa and Shadowhunters Will Herondale and Jem Carstairs, who happen to be parabatai.  It is twisted, conflicted, and juicy.  From one chapter to the next my loyalties keep switching between Will and Jem and wondering if there is a way for her to just have them both!

Angels, please no spoilers in the comments below!  I haven’t finished yet and need to savor every moment.

The Girl on the Train by Paula Hawkins

Okay, so this is the BIG HIT BOOK that all of us authors are desperately trying to write, and it’s not an accident that it’s become so popular. Like Gillian Flynn’s Gone Girl (a book and movie to which it will inevitably be compared for the rest of eternity), it’s a taut, dramatic thriller featuring a cast of deeply flawed characters who all have some serious skeletons in their closets.

I won’t give away too many plot points here (we’ll save that for when we review the movie with Emily Blunt coming out in October), but suffice it to say we’ve got all the elements of a great who-done-it here: the unreliable narrator (black-out drunk Rachel), the jumps to other perspectives (husband-stealing Anna and, well, every-man-stealing Megan), the cast of potential “killers” who may or may not have left Megan for dead in the woods near her house. Everyone with a motive; everyone with secrets to protect.

Like all great thriller writers, Miss Hawkins has mastered the art of writing the “super short chapters so you might as well read another one before bed” story structure. You know, the one that made you finish The Da Vinci Code in one sitting a decade ago… even if that sitting did end at 3:00AM with your contacts glued to your eyeballs, silently swearing to yourself that you had to be up for work in four hours, but damn it, just one more chapter first. After all, they’re only a page and a half!

The strongest thing this book has going for it is its protagonist. Rachel is an alcoholic who can’t remember all the horrible things she’s done while drunk, but who knows that whatever those things were, they were so bad that they justified her husband leaving her for Anna. She’s the kind of female lead we don’t get to see very often—self-sabotaging, unrelentingly lonely, often allowing her desperation for human connection to get the best of her, causing her to make some painfully bad decisions. Usually only men get to be this fucked up. Women can have fatal flaws—too controlling, bad at their job, too nosey, one time they smoked a cigarette (I’m looking at you, This is 40); but in the end, their flaws are usually justified somehow, and not really that bad.

Rachel is TOTALLY that bad. And while it is in some ways the strongest element of this novel, setting it apart from hundreds of other who-done-its, it is also a little bit like hanging out with the Girl You Wish You’d Never Started Talking To at a Party. You keep rooting for her to get it together, but you know she’s not going to. After a while, you start looking for the exit.

In the book, Rachel is described by her ex-husband’s new wife thusly: “She might have been attractive once—she was quite striking when he met her, I’ve seen pictures: all huge dark eyes and generous curves—but now she’s just run to fat.”

Don’t worry, though. I’ve seen the trailer. Emily is totally not wearing any eyeliner in this thing. So, I’m thinking Oscar. (I’m just kidding. I absolutely love Emily Blunt, and I’m sure she’s going to kill this. But, seriously, Hollywood—“generous curves”? *sigh.)

Still, we are very excited to check out this movie. The trailer totally hit all the sweet spots. Wish it were coming out sooner.

Check back for more books we are loving each month, and let us know what you’re reading and loving in the comments below!  Coming up next, JoJo Moyes’ Me Before You!

“Like” our Facebook page Novel2Screen for more updates on your favorite novel-to-screen adaptations, including weekly recaps of “Outlander”!