“Can you write a successful novel in which the hero is supposed to stop an event that we know is going to happen, like the JFK assassination?”

It’s a good question, and she follows up by saying that every time she’s seen it, it doesn’t work.

Well, because it’s bullshit. JFK does get assassinated… every time. And until an author can invent an ACTUAL time machine that makes all the readers of the book magically transport to an alternate universe so that when they put the book down, suddenly JFK never got assassinated—well, I guess if an author could do that, they’d probably be making a fortune working for the NSA by now.

I came out to Los Angeles in 1998 to be an actress, with a twinkle in my eye and $40,000 in the bank, saved by going to a much cheaper college than my parents had anticipated. (Bear with me, this story is going somewhere. I promise.) If I had bought a condo in West Hollywood in 1998 for $250,000, I probably could have sold it in 2007 for about half a million dollars.

Sometimes I lie awake in bed at night and count that imaginary money, like artificial snowflakes drifting by the window and melting as soon as they hit the perma-summer California soil. Isn’t that a beautiful image?

I didn’t buy that condo, by the way. I blew the money on rent, acting classes and headshots in which I desperately tried to look like the Jewish Bette Davis. Like this one: 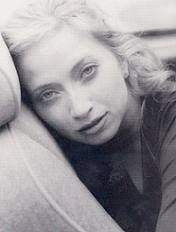 Why am I talking about this? Well, because I review Outlander, of course. And the central conceit of Outlander, and in particular Dragonfly in Amber—the basis for the current second season of the Starz show—is that our protagonists Jamie and Claire are going to change history by preventing the Bonnie Prince Charles from invading Scotland and trying to reclaim the British throne.

Because Claire knows, just as we do—or would know if we were British or Scottish and had been taught this stuff in school like Claire was—that the revolution will be unsuccessful. Not only that, but by forcing the Scottish Highlander tribes to join the war effort, they will be effectively destroyed—almost all their forces wiped out at the fatal Battle of Culloden.

Claire knows this, just like I know a two-bedroom condo in West Hollywood will currently run you a cool million dollars. (Hold on, now I’m just thinking about that.)

Thanks, Sam. You always cheer me up.

And I guess that’s what I’m getting to now. Why do we read Outlander, or watch the TV show, when we know the plan is fucked? And it’s not like it’s a big secret that it’s fucked. Diana Gabaldon opens Dragonfly in Amber by telling us it didn’t work. And Ronald D. Moore and Co, in turn, have opened season two of Outlander by telling us, even more directly than Herself did, “Hey, folks, don’t get your hopes up. We didn’t actually invent a time machine and change the past.”

I mean, for God’s sakes, this is the first scene: 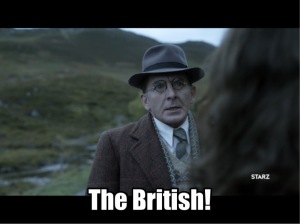 And I guess a follow-up question might be, Are as many people watching season two of Outlander as watched the first season? Because I’ve got to say—and don’t get me wrong, I’m loving season two—but there’s an innate drama in the first Outlander book and TV season that is somehow lacking in the sequels. And that drama, now that I’m trying to pinpoint it, comes in the form of possibility. 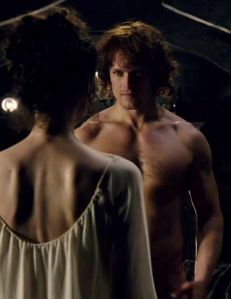 And I’m cool with that. Why? Because it could happen. None of these people actually existed, so what difference does it make if Claire changes the past?

But Dragonfly, AKA season two? Well, we’re a little stuck here, aren’t we? This plan isn’t going to work, and we know it. So why are we watching beautiful people parade around in fancy costumes—exquisite though they may be—if we know it will come to naught? Is it all just a charade, the way that 18th century Parisian noblesse was, well, a charade? Are we watching beautiful ghosts primping and posing in front of a mirror that is bound to crack? 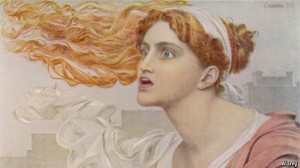 Because now we know, don’t we? We know where this is going, and there’s nothing we can do but watch. Like the Greek myth of Cassandra, cursed by Apollo to see the future, but powerless to stop it. She is driven mad, and we know that the same thing will begin to happen to Claire as she realizes the truth: the past is inevitable.

Now time travel stories are, of course, nothing new. Let’s see, we’ve got HG Wells, Asimov’s The End of Eternity… Vonnegut took it on with Slaughterhouse-Five. The brilliant children’s novel by Madeleine L’Engle, A Wrinkle in Time. Authors throughout all of ACTUAL history have dipped their toes in that crystal-clear water, trying to step even further back in time, only to find what Claire and Jamie will now learn: It’s too late.

And yet… what if?

Because in the end, that’s really what literature is, isn’t it? Whether it’s about a time portal to 1743, or an alternate future in which all books are burned at 451°, or a girl who stages her own disappearance to frame a cheating husband—books are just a large game of “What if?” And we know, of course, that when we put the book down, the game will be over.

There is no stone portal. There is no Jamie Fraser (sorry, ladies—I’ve looked. I really have). There may be some book burnings going on somewhere, but thank God we haven’t banned them all yet. And Amazing Amy never really staged her own death.

But what if they did?

What if Claire Beauchamp Fraser did exist, and she did try to change the past? What could we learn from her futile efforts? Could we prevent the next Battle of Culloden—the one that’s happening right now in Syria, for instance—if we only read enough books? If we only understood our own nature well enough to grow wiser, angrier, sadder? Could we care more about each other, about the people who aren’t here anymore to fight for, or the people who might be coming… just around the corner? Just inside the front cover of another book?

It won’t work. It never works. But if we stop imagining it, if we shut off our “What if,” then what else do we lose? And that, to me anyway, is when truth becomes scarier than fiction. What do you think?

8 thoughts on “The Outlander Problem: AKA-Why Do We Read Historical Fiction?”