Ever get a call from your bff who begs you to go to the latest release of a movie she’s been dying to see.  She babbles on about the amazing storyline, the great cast, and drops just enough plot twists to make you click over to movietickets.com.  Then she drops the bomb.  It’s based on this amazing book she read last summer.  Your finger hesitates on the mouse, because if there’s one thing we’ve learned from reading books and watching the adaptations is that 9 times out of 10 the book will be better.

And now you want to read the book first.

Welcome to our new recurring article where we dish on upcoming novel-to-screen adaptations – so we all can read the books before the movies come out!

Don’t worry.  There’s still plenty of time to read the two books set to be released next.  Alice Through the Looking Glass comes out May 27 and Me Before You is released on June 3rd.

Alice Through the Looking Glass is exactly what you think it is: the sequel to Tim Burton’s bobblehead version of Alice in Wonderland.  Looking Glass is directed by James Bobin, who wrote and directed Muppets Most Wanted, and written by Linda Woolverton, based on the book (linked here) by Lewis Carroll.  From the trailers it looks like Bobin is keeping with Burton’s style.  The film stars Mia Wasikowska and Johnny Depp.

I’ve only seen parts of Alice in Wonderland and struggled to get into the film, so I probably won’t be first in line to Looking Glass.  But the first film had its share of fans, so if Alice is your favorite Disney un-princess, you might want to give it a look.  Personally, I have a soft spot in my heart for the 1985 musical version of Alice in Wonderland and Through the Looking Glass, directed by Harry Harris, starring Natalie Gregory and chock-full of late, great film and stage stars like Sammy Davis, Jr., Sid Ceasar, Jonathan Winters, and Carol Channing, who I was surprised to find is still with us at 85!

Me Before You is a love story about a young woman named Louisa who bonds with Will, the paralyzed man she’s employed to help.  Directed by Thea Sharrock, the film stars Emilia Clarke (Game of Thrones) and Sam Claflin (The Hunger Games: Catching Fire) with Matthew Lewis (Harry Potter series).  Pick up the book here and read it, even if it is just your excuse to go see how good-looking Neville Longbottom grew up to be.  If that isn’t reason enough, then we should let you know that the screenplay was written by Jojo Moyes, who also wrote the novel the film is based on, previously discussed in our article Upcoming Latino Films.  Typically when the writer of the novel is involved in the crafting of the script, good things happen.

What We Are Reading – How ‘Bout You?

The second half our new article we want to dedicate to books that we – and YOU – are reading that maybe aren’t slated for release, or even optioned, but we’d LOVE to see on screen.

Right now I’m reading Artemis Fowl by Eoin Colfer because I heard rumors Kenneth Branagh would be directing it, but there’s no release date.  I’m a slow reader, so I’m getting a head start.  I read The BFG in the fourth grade to prepare for this summer’s release.

Rebeccca, however, has been busier than me in the reading department this month.  She’s blazed through three books: Passenger  by Alexandra Bracken, The Mystery of Hollow Places by Rebecca Podos, and The Night Circus by Erin Morgenstern.  I’m pretty sure she did this just to show off, but I’ll let her take it away now.

A time-traveling YA love story, it features a beautiful young blonde violinist who accidentally travels through time and meets a dashing half-black sailor in the 1700s.

I kept imagining the younger Fanning sister, Elle, as the girl (who, not for nothing, is going to be playing Mary Shelley in the upcoming movie A Storm in the Stars, and as everyone who read Why Frankenstein Won’t Die knows, I’m kind of obsessed with Miss Shelley, so count me in).  For the pirate, I kept picturing that cute Jacob Artist guy from Glee, who is apparently on Quantico now.  Whatever he’s on, he needs to be on it more often, because the man is basically the mixed-race Gene Kelly.

Let’s see how they look together: 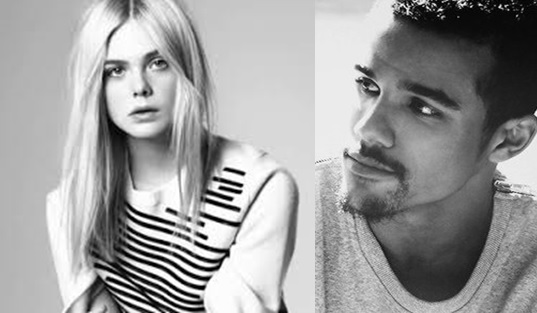 And that, my friends, is how we play the game Hollywood Casting Director!

Chris, only one person can play Hollywood Casting Director at a time.  Besides, you didn’t read the book, so we’re sticking with my choices.

The Mystery of Hollow Places by Rebecca Podos

Holy crap balls, I loved this book.  A debut YA novel about a teenage girl searching for her missing father (by first finding her long-missing mother).  It’s simple, funny, and completely got under my skin.  Also the protagonist is obsessed with the book Rebecca by Daphne du Maurier, which is one of my favorite Hitchcock movies (and also my name, so there’s that).

I have to disagree.

Chris?!  What are you doing back commenting on my book list?

Because I loved the book Rebecca so much that I was appalled by the changes made to the end just to make Laurence Olivier more appealing to the audience.  Personally, I haven’t liked any screen version of Rebecca, so this is one book that I think could totally use an updated film.

OK, whatever.  Back to The Mystery of Hollow Places.  HIGHLY RECOMEND.  As far as casting goes, I don’t know.  If it ever became a movie, which I could totally see, it should be girl – you know, that amazing teen actress you haven’t heard of yet, but she’s gonna be huge.  Like, huge.

The Night Circus by Erin Morgenstern

Don’t you love it when you miss a book the first time around and then you get to discover it like you’ve found a secret magical toy that only you know about?  I’m pretty well and good obsessed with this book at this point.  If you haven’t read it, click here.  I’m not going to tell you what it’s about.  Just read it.

This book is becoming a movie (or so IMDb promises me).  It’s got a producer and everything, but it’s been in development since 2011.  That kind of sucks, but it doesn’t necessarily mean that the movie won’t get made.  Stuff rolls along s-l-o-w in Hollywood sometimes.

Rebecca, I think you’re the second person to mention this book to me.  Wait, no.  Maybe I read a review and wrote the title down thinking it was a book up my alley.  Maybe I should take my own advice – and yours – and read it.

You should, Chris.  You might even get it done before it premieres, my friend.

Everyone, what are you reading right now?  Do you think it’d make a great film?  Let us know in the comments section and tell us what you think we’d enjoy reading too!