Oh, hey, look out, you’re about to get hit with a GIANT FRIGGIN’ SPOILER ALERT.

Seriously, read this after you’ve seen Season 2 Episode 1 of Outlander, which you can watch right now on the Starz app or by “adding on” Starz to your Amazon Prime subscription (and no, I swear, I am not being paid by these companies to plug them. But, um, if these companies are reading and would like to pay me, I’m totally open to that.)

Okay, moving on, let’s talk about the first episode in relation to Dragonfly in Amber and also just, well, as a TV show.

I don’t know about you folks, but this episode was like Ronald D. Moore took a back scratcher and scratched an itch that has been bothering me since reading Dragonfly. As everyone who’s read my earlier posts like this one and this one, and well, this one, knows, I’ve always had a humungus problem with Diana G starting Dragonfly 20 years after the events of Outlander.

To recap, Outlander ends with Claire helping Jamie to recover from the emotional and physical wounds of his vicious rape at the hands of the evil Black Jack Randall, whereupon they escape by boat to France to begin a new life together and (hopefully) stop the doomed Jacobite rebellion which will lead to the demise of the Highland culture at the Battle of Culloden. Oh, yeah, also Claire is pregnant with Jamie’s baby. Everyone got all that? Good.

And Dragonfly then begins… 20 years later, where we quickly learn that Jamie died, Claire lived her life with Frank in the 20th century, and her daughter Bree—a towering redhead—was raised by Frank as his own. Also did I mention that Jamie died? And life sucks. And everything you ever wanted in the 900 pages of Outlander is like that time in eighth grade when you were totally sure Andy Pinkowitz was going to ask you to the spring dance but then he asked Jenny Stein instead and then you overheard him saying you were a loser who smelled like cat poo.

Starting Dragonfly with Claire being 50 instead of 28 damaged me psychologically for a while there, but now I feel better, thanks to this episode.

Episode one gives us all the scenes we don’t get at the beginning of Dragonfly. Right off the bat, with Claire asking a passing motorist who won the Battle of Culloden, then breaking down crying in the middle of the street at the answer—all the feels, people. All the feels.

The episode really belongs to Frank, which is not surprising, since throughout season one, Frank has had much more of a presence than he did in the books. Also when you’ve got an actor as talented as Tobias Menzies in your show, you should give him as many big scenes as possible, including one where he learns that his wife time traveled to the 1700s, married another man, and is expecting a baby. 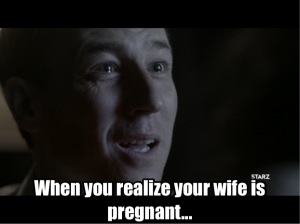 In fact, as soon as Claire gets out of the hospital and back to Reverend Wakefield’s house, we are treated to a virtual Merchant Ivory production of fabulous acting, deft writing, and a really satisfying plunge into the emotional whirlwind that these characters will now have to endure.

Also, we get to see this little cutie for a second: Thus we are gently reminded who he is for when he—you know—pops up later. (It’s Roger Wakefield, in case you have no idea what I’m talking about.)

Another thing that I thought was just so smart was keeping the character of Mrs. Graham at the Wakefield residence, AKA the fortune-telling woman who predicted early on in Outlander that Claire would go on a journey… and have two husbands. By giving Claire this confidante to talk to, we give her a chance to exorcise her feelings in an actual scene, not just in voiceover. “Don’t spend the rest of your days chasing a ghost. Not when there’s a flesh-and-blood living man who loves you still with all his heart.” – Mrs. Graham

Mrs. Graham also serves the same purpose for Claire as Reverend Wakefield does for Frank, ie: nudging them back into each other’s arms. They’re basically the Friar Lawrence and Nurse of this episode, which frankly we needed. It was quite a leap in the books to accept that Frank took Claire back, pregnant with another man’s child.

But here, we get it. It’s not an easy decision for him. But knowing that he himself is sterile and that this might be his only chance to have a child, well… life is never as clean as we would like it to be. Still, it’s nice to give him his moment to be angry, frustrated, hurt.

“Now as for this other man—Jamie—I will not say that I understand your feelings for him. How could I possibly? But I can accept them. I can accept that you—that you did feel that way. That you had this experience with this man. And that leaving him broke your heart. I can accept it.” –Frank

And then when Frank presents Claire with his conditions for remaining with her, it makes sense. It gives him a moment to stand up for himself in a way that is glossed over in the books. Because we never see these scenes in Dragonfly, it can be read that Frank was just a huge pushover. But he isn’t. He’s a man who has to make an impossible decision.

And so he insists that the baby will be raised as his own.

“Raised in a lie?” Claire asks. “No, with a father… not the echo of a memory that they can never catch,” Frank responds.

His other condition—that Claire truly let Jaime go and stop combing the history books trying to find word of him—makes sense. Claire is certain that Jamie died in the Battle of Culloden, and is therefore already dead on the other side of the stone portal. So what is there to cling to?

And now we get that beautiful moment where she hands him the clothes from the 1700s, tries to take off her second wedding ring. “It’s all right,” he tells her, when Jamie’s ring won’t budge. “When you’re ready.” The ring stays on… for now.

And then off they fly to America, when…

Well, we come back to where Dragonfly would have us go.

From here, the story is pretty true to the opening France scenes of the novel. We see this handsome devil again: 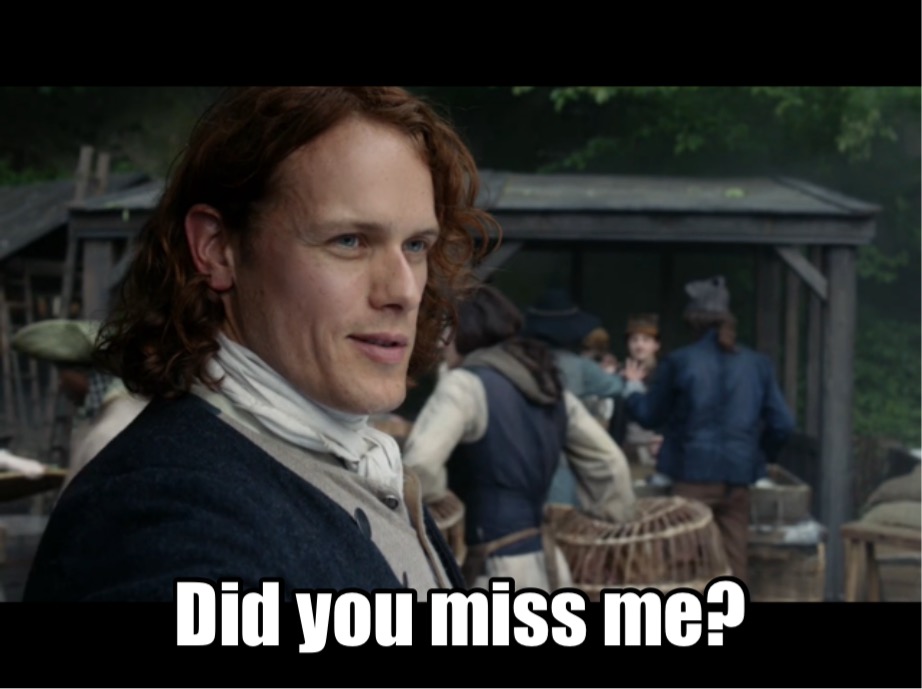 And this other handsome devil: We meet some of the new cast of characters, namely cousin Jared, whose doubt of Jamie’s true devotion to the Jacobite cause gives us a lovely reason for Sam Heughan to—you guessed it—take his shirt off. (Thank you, Outlander. You never disappoint.)

Oh, I hate seeing this back… but I don’t mind the front.

And, just as in the book, Claire screws up royally by outing the horrific case of smallpox on the boat of the Comte St. Germain, played by this stone-cold fox. As the boat of the comte is destroyed and Claire and Jamie get in their carriage to ride away, well… I guess we’ll tune in next week to find out what happens next. So far, however, I’m as happy as Jenny Stein must have felt at that spring fling dance… or as happy as I was ten years later when I found out Andy Pinkowitz is gay.

Follow Rebecca Phelps on Twitter: @DownWorldNovel and “like” our FB page: Novel2Screen for weekly reviews of Outlander and more on your favorite upcoming movies and TV shows adapted from novels. Or just follow this blog (little button, lower right-hand corner).