Contains spoilers for those who are not familiar with The Mortal Instrument series or Shadowhunters TV show.

Tuesday night’s season finale of Shadowhunters was a fun way to wrap up the first season.  Actually, it wasn’t a wrap up at all.  It was more like an “Oh crap, now we gotta go rescue Jace before he ends up with a fatal case of the Stockholm syndrome!”  I’m sure Simon was happy he wasn’t the one being kidnapped this time.  Vampirism has its perks.

But before we delve into all the drama, I have to say thank you again to the talented and gracious Katherine McNamara for letting me interview her this week.  If you haven’t read Novel2Screen’s exclusive interview with the star of Freeform’s Shadowhunters you can do it here.  Special thanks and shout out to the crew at Freeform for making the magic happen.

In my interview with Katherine she mentioned there would be surprises and twists.  She was right!  Did any of us viewers expect to see Jace go willingly with Valentine?!  Granted, everyone he cares about had seraph blades to their throats.  That being said, the end of the episode felt more borrowed from book 5, City of Lost Souls, when Jace and Sebastian team up to create new Shadowhunters versus City of Ashes.  At the end of City of Ashes Simon is kidnapped – again – along with Maia (who hasn’t been revealed in Shadowhunters), Valentine sacrifices Jace to The Inquisitor, and the Shadowhunters attack Valentine and his demons aboard a ship.  In the finale there were no demons, to which Raphael brilliantly pointed out: “For Shadowhunters you don’t do a lot of Shadowhunting.”  However, there was a metal ship.

There was a cookbook that was actually a spell book, a reference from City of Glass.  Katherine McNamara was right when she said they were shaking up the storyline and surprising audiences with a few twists.  What Morning Star did well was incorporating elements of the series while giving a new spin on the tale.

And there were Star Wars references a plenty.

Many moments felt like homages to Star Wars with some Lord of the Rings tossed in for good measure.  I swear, there is a writer somewhere in the Shadowhunters writers’ room who grew up shooting films on their parents’ camcorder with their Star Wars action figures.  It’s really hard to get those old 1980s camcorders to focus well on the small figures’ heads.  Not that I would know from personal experience…

First, we have the ring.  The one ring to find them, the one ring to rule them all… Actually, it is only a cool way to speak via hologram.  However, it did have a strange LotR/SW quality for when anyone put it on Valentine appeared like Sauron – or the Emperor – watching them from afar.

But when Shadowhunters really took a turn to the dark side was Jace’s throw down with Hodge.  Hodge is all “You can’t beat me; I taught you everything you know.”  Then Jace goes Darth Maul, whipping out the double edged seraph blade, to which Hodge can only give a smile of “OK, haven’t seen that before….except for in The Phantom Menace.”

Then Jace proceeds to chop off Hodge’s hand a la The Empire Strikes Back and is all Anakin Skywalker angry clad in Darth Vader black, and Valentine pops up via hologram, reaching out to him with one hand saying, “Join me, and together, we can rule the galaxy as father and son!”

OK, maybe he didn’t say those exact words, but it was totally implied.

My favorite moments were brought to us by Simon.  Now that he has come to terms with being dead, he’s got his wit back.

“The Book of the White.  Big white spell book.  Kinda explains itself.”

Reminiscing about Jocelyn’s chicken cacciatore, “How can I forget?  Even better the next day.  The gift that keeps on giving.” 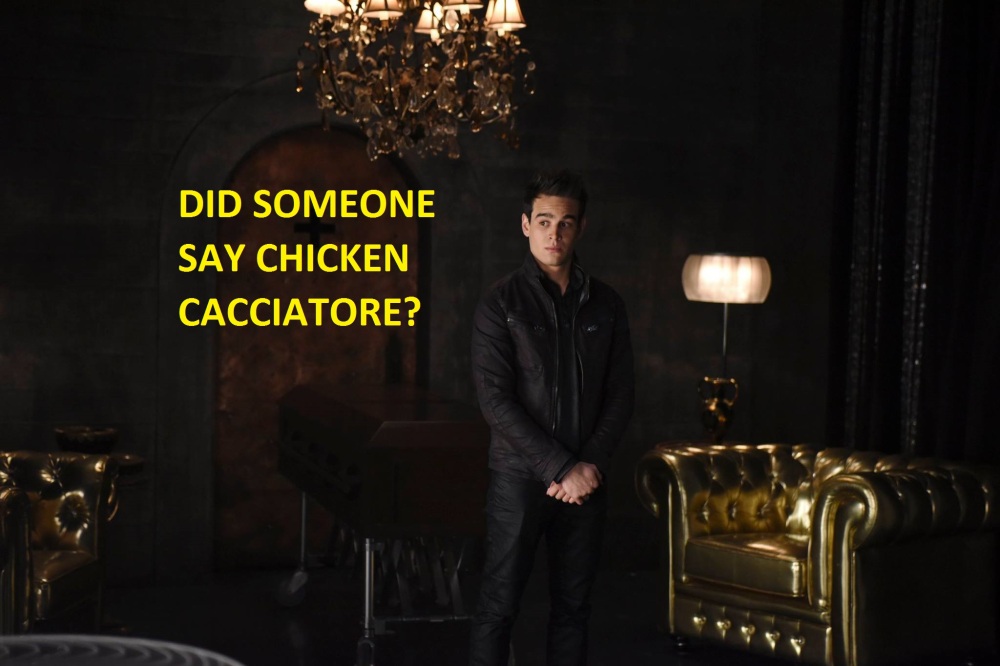 Love you, Simon.  Always have.  Always will.

And the heart-tugging moment of the episode goes to Alec.  Actually, his arm.  As it wraps around the frantic, desperate Clary, preventing her – the person he couldn’t stand just a few weeks ago – from losing herself in a portal and comforts her.

But now we are left with so many questions.  How will they save Jace from continuing down the dark path towards the sith?  What will happen to Hodge?  Do we even care; he’s such a douche anyway?  And the big question Katherine coyly avoided in my interview: will Clary and Simon have a chance now that Jace is not only her brother, but also on a boat out to sea? And where is that barge sailing to anyway?

Finally, what will we do with ourselves until Season 2?! 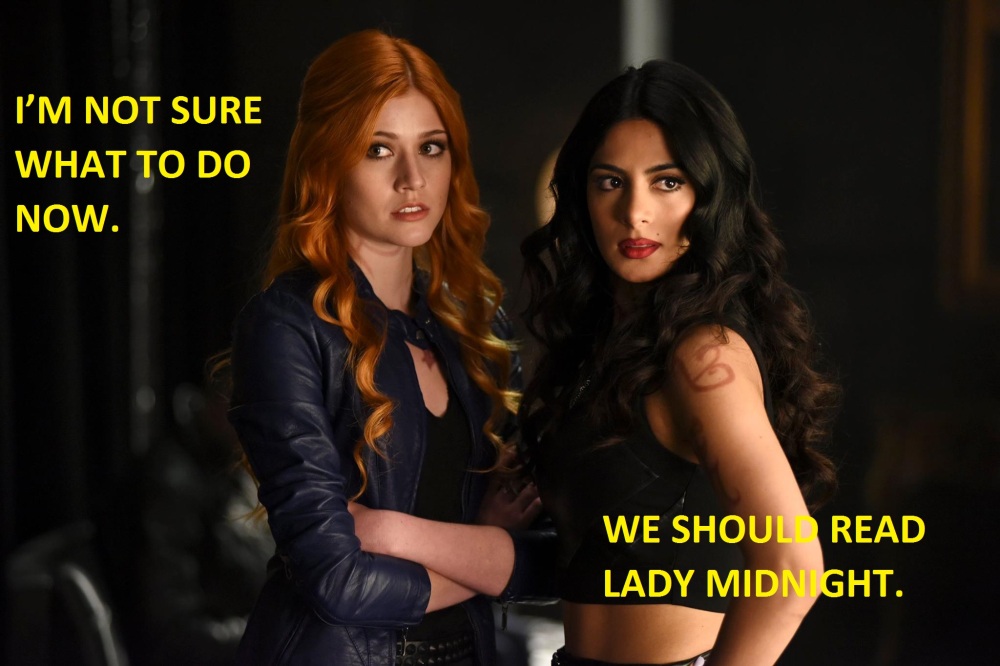 I leave you with one final Jace Face.

Catch up on Shadowhunters here.