Have you done this yet? Found yourself bored on a Tuesday evening and randomly started scanning the Hulu options, only to find that your entire youth has been preserved online in a Freaky-Friday style Internet void that only your forgotten ambitions and youthful crushes can fill? Yeah, no, me neither. Well, until last Tuesday.

Why did I start watching Felicity, of all things? I was never really a fan. In fact, I really couldn’t tell you anything about it except for the basic premise: Curly-haired and slightly manic white girl follows super cute boy across the country for college. At the time I thought it was—well, who remembers? I was busy at the time, being young myself and having real-life crushes on people who existed and who I had an off-chance of actually meeting.

But there it was: Felicity. What year was that, I wondered. ’98? In 1998, I graduated from college and moved to Los Angeles to be an actress. I was 21. There, I’ve outed myself. (So much for my “Younger”-style fantasy of getting some highlights and reliving my youth by passing myself off as a Millennial publishing assistant.) Sure, why not, I thought to myself. The kids are asleep. I’ll hate-watch an episode or two of Felicity.

So I watched an episode. Then two. Then all of season one. I stopped short of the fourth and final year, in which, apparently, Felicity goes through an actual wormhole and emerges as “future Felicity” to come back, Cassandra-like, and warn the two cute boys she’s chasing about their alternative futures. (Seriously, JJ Abrams, if you were that bored with the actual premise, why not just call it a day?) But I did watch all of season one. Alone, in bed, on the tablet, hiding the screen from my husband who would never understand why the hell I was watching Felicity.

So why couldn’t I turn it off?

Well, folks, I’ve discovered something horrible. The ‘90s were fucking awesome. No, seriously, I know it’s hard to remember. But they were, like, the best.  Everything was great. It was slower and everybody had really great hair. Young people read actual novels made of paper things called books. We were doing this whole grunge/flannel/peacoat/sweater thing that frankly was very flattering on most people. Sure, not everything worked. I’m still not sure what that whole baby-barrette thing in the bangs was all about. Or the teddy-bear-shaped backpack phase. That was pretty rough. And we listened to a lot of emo music. Like, seriously a lot. Okay, too much. Too much emo music.

But, seriously? Do you remember how otherwise awesome the ‘90s were? I present the following four pieces of evidence.

In the ‘90s, we had crushes on guys that looked like this:

(I told you, the sweater thing really did something for the guys.)

So in Felicity, Keri Russell has to decide between Scott Speedman and Scott Foley (the ‘90s were chock-full of cute guys named Scott, apparently). They’re both absolutely adorable, but Scott Speedman had this “you might wake up chained to the radiator in Thailand, but you won’t mind” vibe about him that was pretty undeniable.

Yeah, there was a seedy underbelly to male development in the ‘90s. I seem to recall some unfortunate spiked-hair incidents and a movie in which this happened:

But let’s not quibble, shall we? The ‘90s gave us Campbell Scott and Dylan McDermott and Paul Rudd (who we got to have again in the ‘00s… and, well, now. Jesus, how old is Paul Rudd?) Guys got in touch with their feelings in the ‘90s. They wore meditation beads on those little hemp necklace chokers. They discovered their chakras (and ours). Guys did adorable things like work in a video store and take us on a date to get a Frappaccino and go to college. In Felicity, Scott Foley actually stops himself from having sex with Felicity because she seems too into it, and what if she’s overcompensating because she’s not ready? Aww! That’s so… ‘90s of him.

2. WE DIDN’T HAVE iPHONES

Oh my God, you guys, we totally used to leave our houses! To go, like, outside. To do something adorable, like buy printer cartridges at Staples and call our aunt long-distance from a pay phone. That was an actual thing!

Yeah, sure, we were lost all the time. Especially if you forgot to print out the directions from MapQuest before going anywhere, which was, like, every time you went anywhere. And you know how in old movies, wives badger their husbands to stop at gas stations and get directions? That actually happened!

In season one, Felicity cheats on her boyfriend Scott Foley when they’re on, like, a really short break, because she calls his dorm room late at night and he doesn’t answer, so she assumes he’s sleeping with his ex, Jennifer Garner (who, in a totally ironic twist of ‘90s fate, became his actual ex). And since there wasn’t much point in leaving a message, because after all, it could be hours before he bothered to call his machine and get his messages, and… oh my God, what am I saying? It’s called texting, people. Seriously, how many relationships broke up over this stupid Romeo-and-Juliet missed-message crap?

Felicity also used to leave messages for Scott (and then later, the other Scott) on Post-Its slapped onto his door. That’s a terrible messaging system! How did we ever communicate at all? I know I backpacked through Europe at one point in the ‘90s (because, well, see above). How did I find the hostels? Or food? Or Europe? How did we ever make it out the damn door before we all turned into human self-navigating GPS systems?

On the other hand, do you know what Felicity and her friends used to do? Talk to each other. In person. Out loud. Adorbs.

Keri Russell weighs about 90lbs soaking wet. Now, you wouldn’t necessarily know this if you watched Felicity. Why? Because her character wore sweaters. Like, all the time. It was her thing—big sweaters. And sometimes big jackets, and occasionally baggy pants and sweaters together. In fact, I think it’s not until episode four or five that we realize she’s a walking pipe cleaner. (That’s not body shaming, btw. She’s a really pretty pipe cleaner.)

Can you imagine a prime-time TV show today that starred a woman whose body type isn’t prominently featured, and is in fact completely obscured?

My day job is typing closed captions for the deaf. I do a lot of TV shows—cable, network, you name it. I recently captioned a couple Disney shows—you know, Disney, the channel that’s for little kids and young girls just beginning to develop enough body awareness to hate themselves? Two shows, Lab Rats and Mighty Med, featured a couple young women who were supposed to be scientist/doctor type people. Here are their costumes:

(Those are two different girls, I swear.) 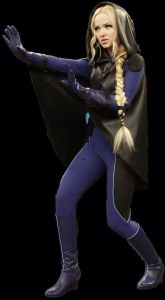 Well, now, that’s Disney, you say. What about a network show aimed at teens to 20-somethings, like Felicity was? Hmm, what’s on now? Quantico? Supergirl? 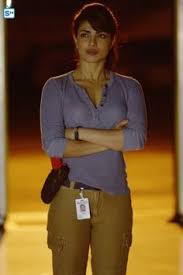 Um, it’s not that these shows aren’t good. Hell, Chris is having a blast reviewing Shadowhunters, but, um… where are our clothes?

That’s all. I just wanted to say it. Remember burning CDs? And cruising Tower Records for no particular reason, just to see what they had in the vinyl section? Or if they had the new Chili Peppers CD for under 20 bucks?

The soundtrack to Felicity is a veritable TARDIS to another era in music history. Sarah McLachlan, Heather Nova, Kate Bush. Stop me before I enter an experimental phase. There was a band that was actually called “Air,” and they have a song on the soundtrack called “All I Need.” Was that a bit pretentious? Yeah, sure. Was it the whitest thing that’s ever happened? Mmm, probably. But we cared about these things. We spent vast quantities of the income from our minimum-wage jobs at vegan coffee shops on music.

Now I know—although to be honest, I can’t really remember—that there was racial strife in the ‘90s. I know there was gun violence and police brutality (actually, that I do remember) and children bringing guns to school and the first war in Iraq. And somewhere in New York or Chicago, I’m sure Donald Trump was already spray-painting his gaudy name all over some phallic-shaped high-rise with gold glitter paint that he fires out of his peanut-sized dick.

But we had Tower Records. And we had Felicity finally getting together with Scott Speedman (whose name was Ben or Scott or Noel or Casey, or whatever the hell hot guys were called in the ‘90s). We had a band called Air, because we were weightless. Because we were young. Because our biggest problem—and this is true—was that the President of the United States may or may not have gotten a blow job. (I want to stress this for those of you who are too young to remember—our biggest national problem in 1998 was that a man may have been on the receiving end of fellatio. That was our problem. Imagine what are non-problems were!)

I watched every episode of season one of Felicity. I even watched the very special date-rape episode, and you know you’ve got a problem when you’re up till midnight hoping Amy Jo Johnson is going to be able to love again after being date raped by that guy from My So-Called Life (not Jared Leto. The other one).

I’m not going to enter any more ‘90s wormholes, despite the come-hither look that Party of Five has been giving me on my Hulu queue lately. I’m ready to come back to 2016. Like any heroin addict, I have to quit before I OD. But for a few nights there, the better part of a week, it was nice to be young again. It was nice to worry—actually worry—about which hot white guy Felicity should date.

Now if you’ll excuse me, it’s time to tell Alexa to dim the living room lights, tell the Xbox to turn itself off, and tell Siri to wake me at 7:00. I’ve got a long day of never leaving my house again to look forward to tomorrow.

Coming up next week, I’ll take a look at the new Jungle Book adaptation!

One thought on “I Fell into a Felicity Vortex. Here’s What I Learned About the ’90s”