Of Men and Angels also could’ve been called Of Men and Backstory. The meat of this week’s Shadowhunters episode was Clary finally learning the story of Valentine, Jocelyn, and Luke and the poor decisions they made in their early twenties. In fact, it was so imperative that Clary learn this information to unlock her ability to find the cup that the characters mentioned this to her about seven times before we were even fifteen minutes into the show. I stopped counting. There could be a drinking game based on how many times someone demands Clary remember, demands she know the truth, or mentions the cup. Warning – you might be sloshed afterwards. 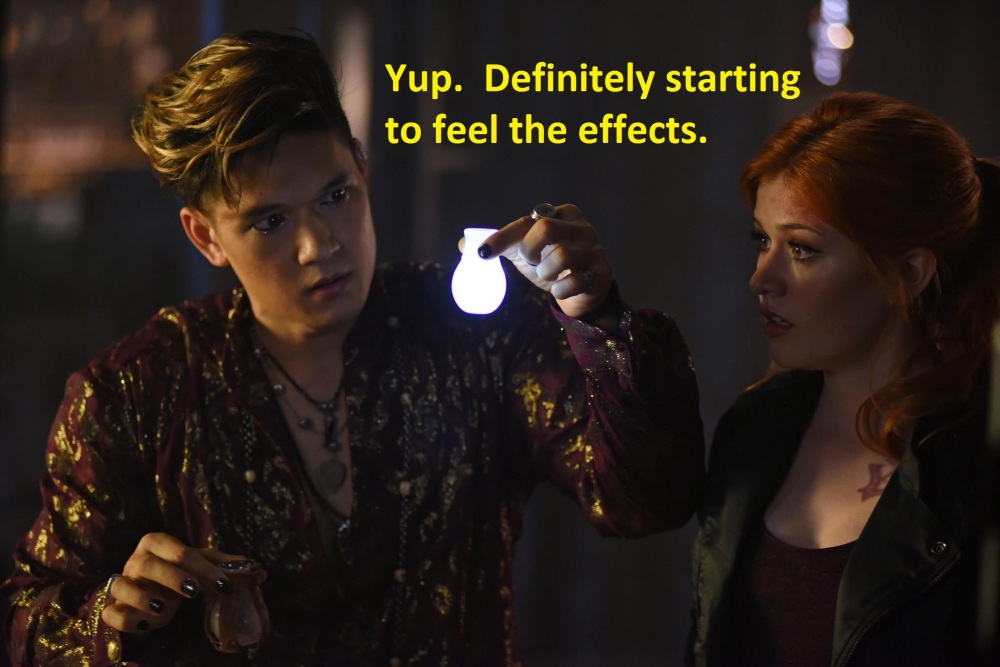 I’m a fan of Cassandra Clare’s the Mortal Instruments series; however, I haven’t read the books multiple times. I don’t have every detail or description memorized. Therefore, even I was confused between Magnus’s and Luke’s explanations of the past. In Of Men and Angels Magnus reveals information about Valentine’s Uprising to Clary. In City of Angels it is Luke who tells Clary almost all the detailed information about Jocelyn and Valentine’s younger years because, well, he was there! But the show gave this to Magnus. Ok, fine. There are a few reasons why the show might make this change: 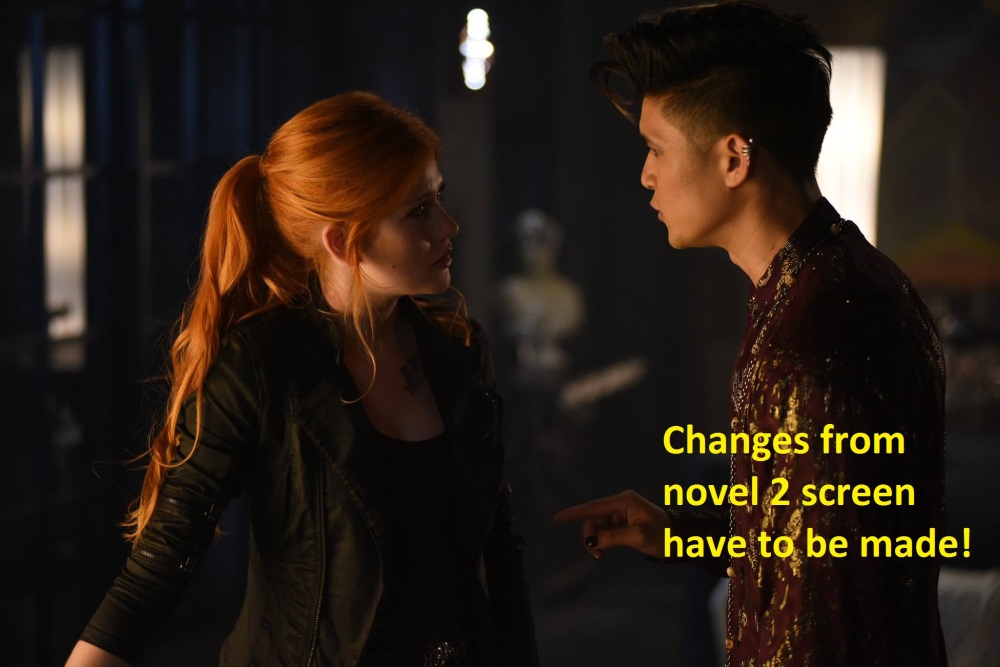 All solid reasons to split up the story telling. Adaptation at work, folks! However, starting with the Uprising, then jumping backward to the forming of the Circle (told by Luke) to jump again forward to his transformation into a werewolf and relationship with Jocelyn made it hard to follow the history. I read the books, and even I was lost. I can’t imagine what a non-reader thought. Oh, wait, I can. My hubby was lost too. Sometimes nonlinear works: Pulp Fiction. But mostly our brains just want to get from point A to point C by going through point B. 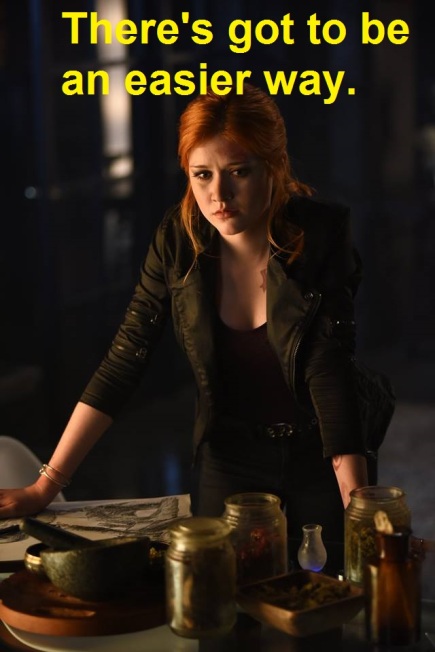 Valentine stealing the Mortal Cup at the Uprising in the show is another good example of how adaptations have to change over different mediums. In City of Bones Valentine steals the cup long before the violent Uprising:

And with the aid of a demon, Valentine stole the Mortal Cup. He left in its place a facsimile. It was months before the Clave realized the Cup was missing, and by then it was too late.

Jocelyn tried to learn what Valentine intended to do with the Cup, but could not. But she knew the Circle planned to fall upon unarmed Downworlders and murder them in the Hall. After such a slaughter, the Accords would fail.*

Showing Valentine steal the Cup and then sit on it for months while Jocelyn hovers asking annoying questions over dinner like, “Do you plan to keep using that chalice at every meal?”, wouldn’t play on screen. TV writers have less than sixty minutes to condense Luke’s thirteen page backstory into visuals. They saved time by showing Valentine steal the Cup right after the Uprising because it was displayed in the center of the room as a large ice sculpture, you know, the kind you’d find at boring conferences, like the Accords. 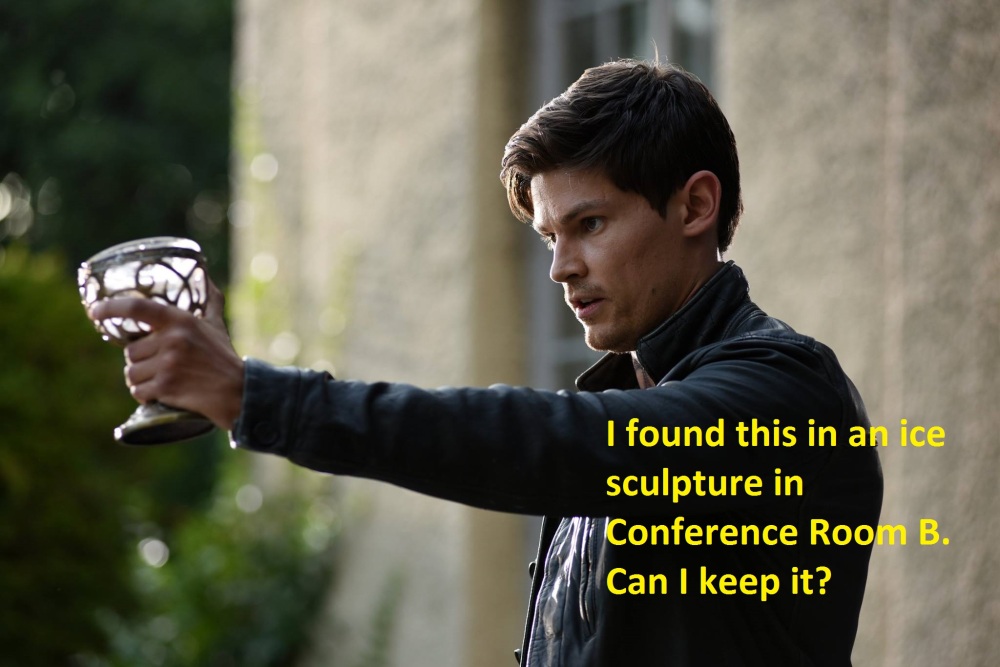 Waiting to reveal that Clary has a brother until the end of the show was a wise choice for TV. In the novel the brother is mentioned earlier in Luke’s story to Clary. If Shadowhunters revealed that bombshell while Luke was rambling on in bed, Clary and the audience might have missed the crucial information. Instead, when adapting a book to the screen go for the strongest impact. BAM! End that episode on a cliff hanger and cut to black!

My award for the laugh-out-loud moment of the night goes to Luke when Clary demands he tell her what that mysterious J.C. box is all about and he went all taciturn with a curt, “Nope.” Glad to finally see Luke developing into a dimensional character of his own.

There was a sweet moment between father and daughter when Robert Lightwood gave Izzy a cookbook. (With the Jace/Simon search for ingredients and the Magnus/Clary brewing, there were a lot of cooking references in this episode.  Someone stock the craft services counter in the writers room, please.)  You know I love a nod to the source material!  For those who haven’t read the series, Isabelle can’t cook to save a Seelie life.

And we finally had some chemistry between Jace and Clary! Of course, I would’ve liked it more if Jace wasn’t being a major butthead all episode and if Simon’s heart wasn’t shattering to pieces on Magnus’s floor and being swept under the rug. 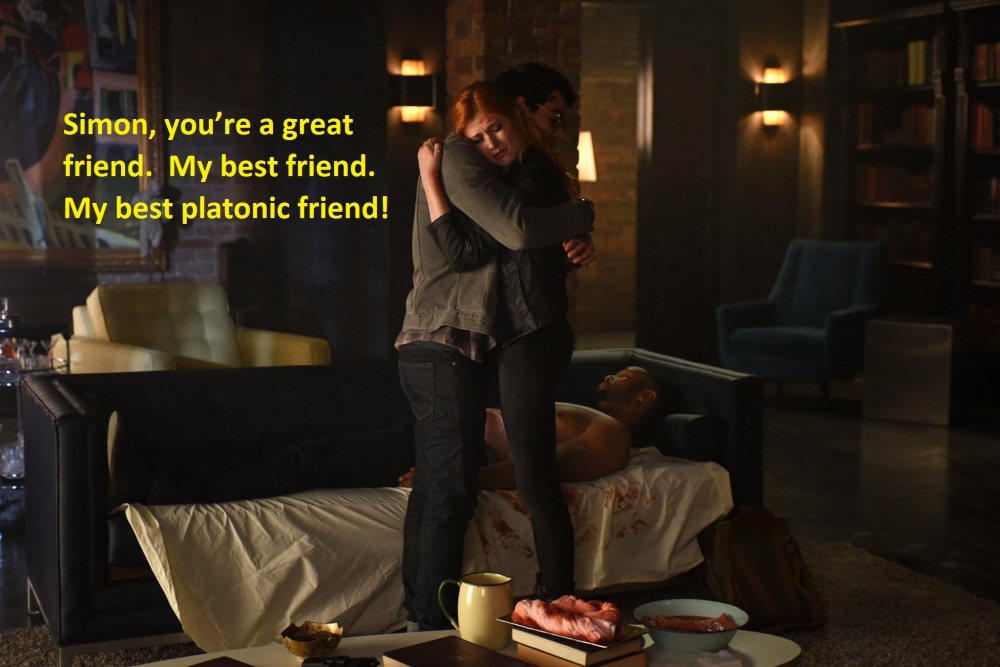 But what the episode should’ve been called was Of Men and Malec. Let’s face it, when Harry Shum, Jr. and Matthew Daddario are on screen together is when the show takes flight. Doubt me? As of 10pm PST Tuesday night the highest rated scene on ShadowhuntersTV, with a runaway 58% of the votes, was Magnus and Alec sharing a drink. Why? Because Shadownhunters is based off of a Young Adult series, and YA readers love romance. Not over-the-top, sappy, eye-rolling romance, but the kind that leaves your stomach fluttering as you read – or watch. Magnus and Alec make me grin like a giddy school girl. Harry Shum, Jr. sparkles in the role, quite literally with that gold eyeliner. Fumbling through his first pseudo date, Matthew Daddario reminded me of my closeted gay friend in college when he first tasted the freedom of simply being himself. There’s an honesty Daddario brings to the character when struggling with Alec’s homosexuality and his place in the Shadowhunter world that I appreciate.

I also liked the nod to the end of City of Ashes when Alec joins hands with Magnus to keep the warlock’s power charged for as long as possible. Yup, Shadowhunters jumped right over an entire novel to the end of Book 2. But in all fairness, it was more a nod to what is to come, and the magic is established in Clare’s world – unlike the Alpha bite paradox of last week. 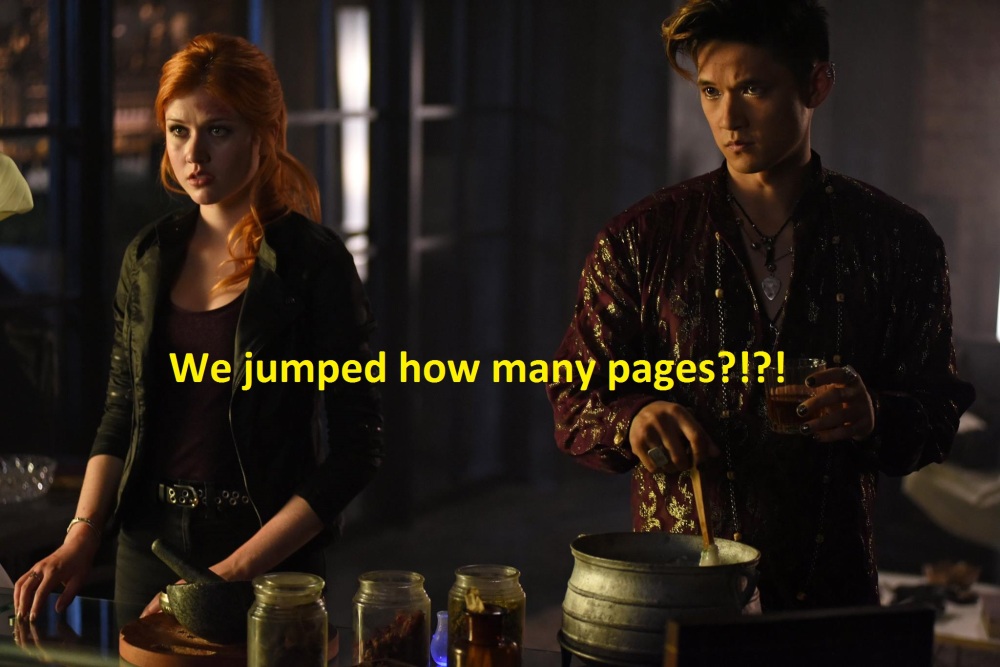 We made it through a week without Chernobyl, always glorious. I’m sticking to my beliefs that this entire episode about Valentine’s backstory would’ve had more impact – like learning Clary has an older brother – if we hadn’t seen so much of him prancing around a nuclear fallout facility with syringes and Invisible people.

Had to because – hello – adorable!

Catch up on all Shadowhunters episodes on Novel2Screen here.