*Spoiler Alert for those who have not read the series, potentially the entire 6 books.

Oh, Shadowhunters. Every time I want to fall in love, you hang me upside down like Simon in the locker room of the Jade Wolf. (Why does a restaurant have a locker room?) Episode 5 Moo Shu to Go wasn’t horrible, but I’m left befuddled and unsatisfied. Don’t get me wrong, Shadowhunters fans. There were some strong moments, primarily from Alberto Rosende bringing back our beloved Simon whose quips were absent from Episode 4 and Episode 3. Plus, there were a string of references to Cassandra Clare’s City of Bones that kept my hope alive: Maryse, Jocelyn’s box with the initials J.C., the Jade Wolf.

Yet on the flip side of this hope there were so many bizarre choices to ditch the source material compounded with schizophrenic acting, I was left staring at the screen much like Jace.

I came close to throwing my copy of City of Bones across my bedroom while writing this review. I want to source Clare’s text, show the similarities, the differences, where the show got it right, but I’m officially lost. Shadowhunters has hop-scotched all over this novel that I’m jumping from page to page.  I’ve realized that nothing in this episode happened in the novel. Jace and Izzy don’t go to the fairies alone. The fairies aren’t in mourning over Seelie spies murdered by Valentine. They don’t shift their allegiance against the Shadowhunters until books 4-6. Alaric isn’t primarily concerned about Luke keeping his badge. Luke should already be the Alpha werewolf. Simon isn’t kidnapped by werewolves. Clary and Jace should be falling for each other by now.

The portrayal of the werewolves is the most egregious change in my opinion. The werewolves are not mobsters in with the crooked cops, dumping bodies over the docks, wanting to kill Clary and Simon for the Mortal Cup. Luke is the Alpha werewolf in the novel. He’s a good guy! They are good guys! They are the only Downworlders the Shadowhunters can trust throughout all six books, with the except of that douche guy that Maia takes down – but that isn’t until book 6 or something so I’m sure Shadowhunters will cover it in next week’s episode. We don’t need to see Luke acquire Alpha status. Not to mention, adding the random statement that only a warlock can cure an Alpha bite makes overturning a werewolf’s Alpha status nearly impossible as you’d have to have a warlock present for the fight because surely someone will get bit. Argh! I’m not opposed to deviating from the books. I know it will happen. But the creators of Shadowhunters need to remember the world and rules of that world.

For example, I’m not against Simon getting kidnapped again, this time by werewolves, because his character has the number one worst luck. I remember reading the series, slamming down the book, and texting my niece that Simon was now a prisoner in Idris. Can he catch a break please? She just sent me back a smiley face. Get used to it. These things just happen to Simon. 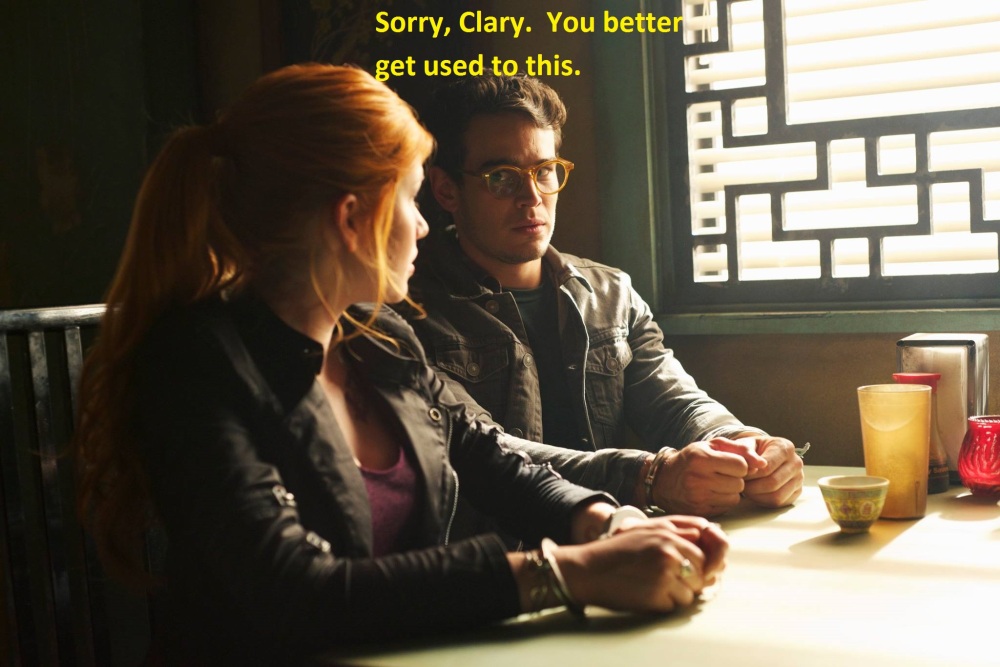 Added bonus, Alberto made us laugh with his line, “Why do I keep getting kidnapped?” Why do you, Simon? In Moo Shu to Go it’s to threaten Clary with your death. But wouldn’t it have been better to have Luke, NYPD detective, have his pack kidnap Simon because Simon is Luke’s best chance at finding Clary so Luke can help her?

I did love Simon’s phone call to Jace and that for the first time he was genuinely pleased to know the Shadowhunter. Alberto gave us the laugh-out-loud moment of the night when desperate and frazzled Simon discovered the Jade Wolf menu in the locker and said over the phone to Jace, “I’m at the Jade Wolf Chinese restaurant on the pier at Green Street and – they have really inexpensive cocktails!” Always finding the bright side of a horrible situation, if not easily distracted. Oh, Simon, how I’ve missed you over the past few episodes. 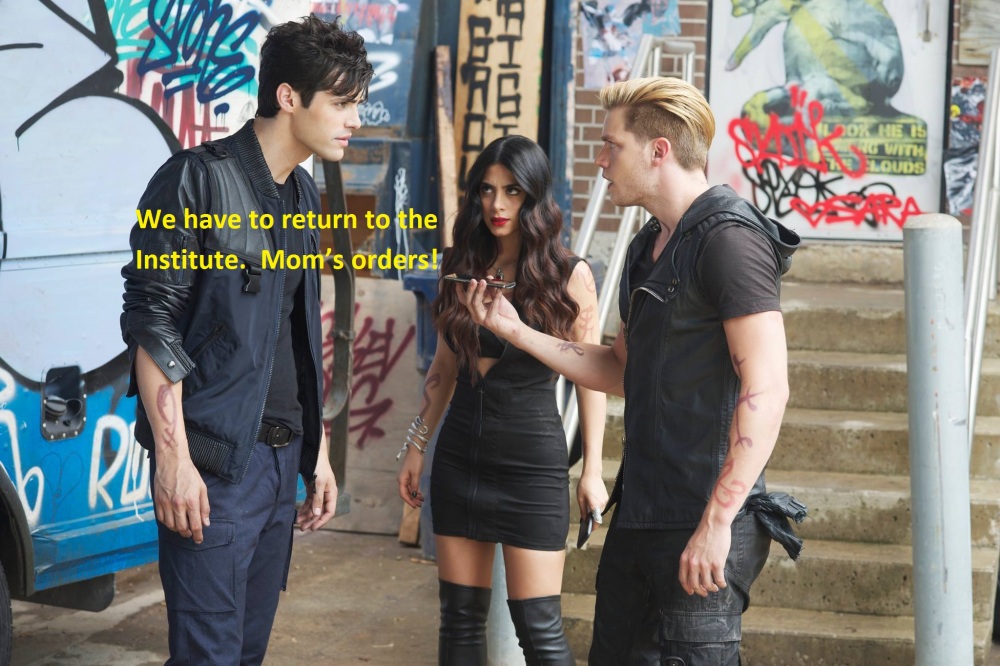 I loved Matthew Daddario last week. I still love him this week. I mean, come on, look at him. 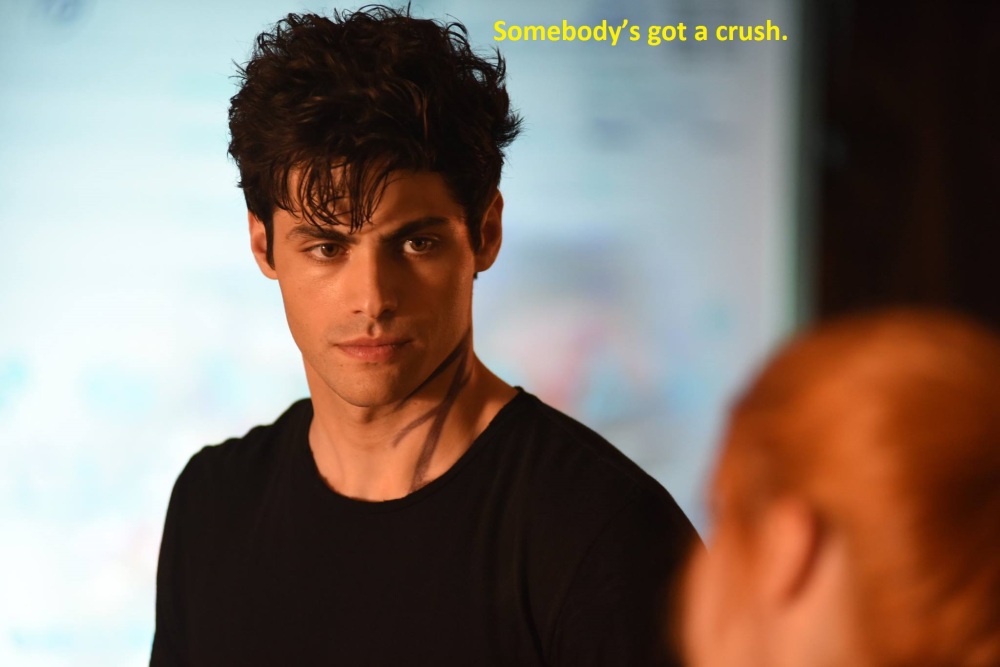 But in Moo Shu to Go Alec’s character hit one note the entire episode. Where is the Alec from City of Bones who throws Clary against the wall in anger and fear? Where’s the Alec from last week who got flustered by Magnus’s charm? I understand he’s bummed about ruining the demon raising ritual and outing himself to Jace, but 60 minutes of no emotional connection or vocal inflection felt excessive.

On the other end of the spectrum was Katherine McNamara’s emotional rollercoaster performance as Clary. While Gretel menacingly prowls near Clary (as menacingly as digital werewolves can be) some Alpha dude named Theo tells Clary that Simon will die if she doesn’t hand over the Mortal Cup. Katherine McNamara nearly hyperventilates as she stares at Gretel, but in the next shot she rallies her inner calm and discloses the fake location of the Mortal Cup, leading me to question how many directors were on this shoot. 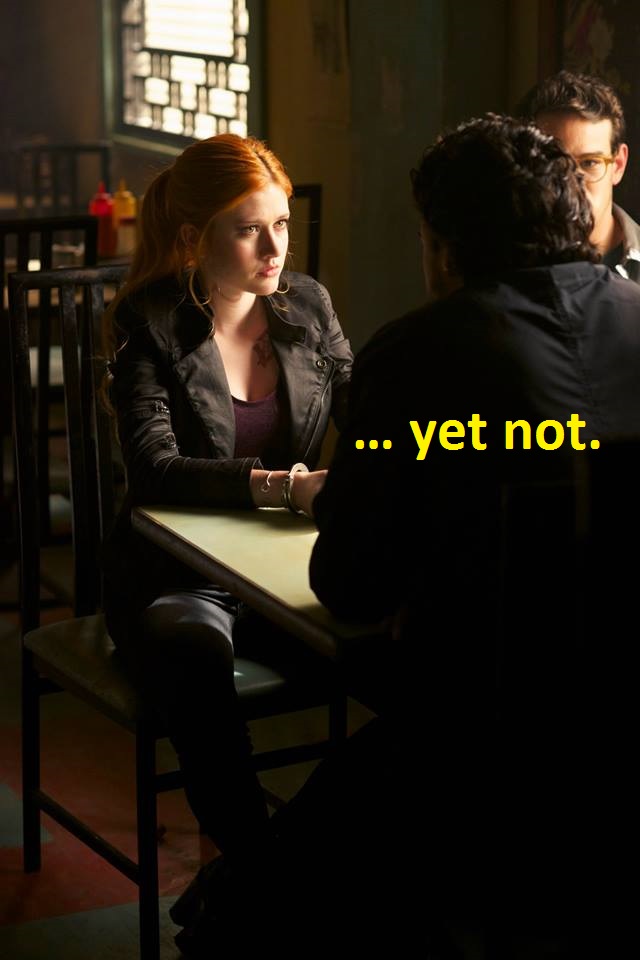 Over the five episodes there have been five directors, a different director for each episode – and that is only counting the ones credited on IMDb. This actually is fairly common in the TV industry, but successful shows have the ability to maintain the tone, style, and performances from episode to episode so that audiences can’t tell a difference. With episode 5, unfortunately Alec lost his spark, Clary was all over the place, and even Jace’s playful nature that we were treated to last week disintegrated into an overly protective brother.

Speaking of Jace as brother material – I mean, boyfriend material – before the big Clary/Jace/Valentine bomb from the end of The Mortal Instruments – Book One is dropped can we get some chemistry going between Clary and Jace? He’s really into never letting her out of his sight, but not for any romantic reason shown on screen. And Clary could care less about Jace. She just wants to find her mom. Yes, we’ve got it; she says it about five times each episode. Her mom is important, but, let’s face it; fans aren’t flocking to these books because they get wrapped up in the Clary/Jocelyn daughter and mother of the year relationship. It’s the love triangle: Clary, Simon, Jace. Right now the only interesting love story from Moo Shu to Go is Isabelle and Maryse. Maryse slighting her teenage daughter and Isabelle’s subtle devastation was the episode’s most emotionally charged moment.

I have no idea what is in store for us next week. Will Malec return? Will Alec find his personality again while Simon loses his? Will the radioactive fallout from Chernobyl finally affect Valentine so we get a better villain? Maybe we will skip to book five and end up drunk and drugged out on fairy paint at a club in Europe? Who knows anymore?