I’m going to talk now about Pride and Prejudice and Zombies, the film version of which opened this past weekend. But first—super quick—let’s talk about the destruction of the library of Alexandria. Wait, don’t go. There’s a point, I promise.

So legend has it that the infamous Library of Alexandria in Egypt was accidentally burned by Caesar while attempting to destroy a bunch of other stuff, but, you know, not the really great library with all the important scrolls and books in it. There have been lots of famous pictures depicting the burning, and all sorts of books written on the subject.

But historians now believe that the library was not destroyed in one fire. In fact, over the course of eight centuries or so, there may have been several different fires, all parts of several different monumental fuck-ups, perpetrated by several different groups of marauding vigilantes seeking to conquer whoever the hell was living there at the time. Thanks to our friends at Wikipedia, we know that Caesar probably only burned part of it in 48 BC.

Then a couple hundred years later, an Aurelian attack did some more damage, followed by the decree of Patriarch Theophilus in 391 AD and finally the Muslim conquest of Egypt in the 600s, which finished the job; everybody nipping away at this once great institution like the corpse of a Thanksgiving turkey that you just can’t help but pick at until you and your cousin play the “who gets the biggest half of the wishbone” game… and then you realize there’s more meat underneath that nobody has eaten yet. What the fuck. Thanksgiving comes but once a year.

So we come now to Pride and Prejudice and Zombies.

Why do we come to this? Because it exists. It’s a real thing that exists and was written (by Seth Grahame-Smith) as a one-off joke—a kind of literary Saturday Night Live sketch, if you will– attempting, quite successfully as it turns out, to cash in on the fact that Jane Austen’s Pride and Prejudice is a work of public domain and therefore free to mess with. The title, apparently, came to him in a moment of inspiration, and led him to download the original book into a Word document and replace all instances of “love” with “zombies,” or something to that effect. I’m not making this up.

But who cares how it was conceived? All that really matters is, does it work? Does it work as a book (and now a movie)? But the next question, really, is: work at doing what, exactly? Now I love parody. Seriously, I love it. I can quote you every damn line of Airplane. I love Scream. Just be funny and have a point. That’s all. And you could say, 200 years after Miss Austen’s serio-comic tale was released, that it was rife for parody.

In fact, Pride and Prejudice, often dismissed as a chick-lit fantasy about a skinny white girl who falls for a hot rich dude who treats her like crap—a  sort of Pretty in Pink for the corset set—may have even been asking for it.

But is that what Pride and Prejudice is, or is it just how we remember it from that time we almost read it in the eighth grade? Or, more to the point, is it how we remember it now that the story has been rehashed over and over again for the last two centuries? Because even those of us who never read the original book know the story. It is, after all, everywhere we look. 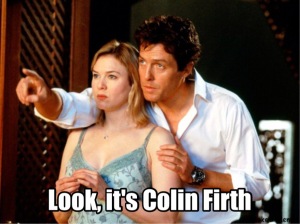 Let’s take a moment to really look at how influential this book has been. Pretty much every modern story with a love triangle has borrowed from it heavily—both those that openly acknowledge the thievery, ie: Bridget Jones’ Diary, which goes ahead and names the Darcy archetype character Mr. Darcy (and then hires the OG Mr. Darcy, Colin Firth, to play him), all the way to Downton Abbey (Hello? The good-looking cousin who is set to inherit the estate because the daughters aren’t eligible comes to visit and picks one of the daughters to be his wife. Um, yeah, you totally made that up, Julian Fellowes). 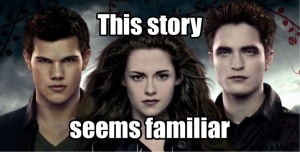 (Edward, the hot rich dude, seems really cold to Bella at first, and her wanna-be boyfriend Wolfman tells her horrible things about him, but then—shocker—Edward is actually cold to her because he’s madly in love with her for reasons that are a bit vague and Wolfman has to go. Yeah, you know: Pride and Prejudice and Edward.) So Mr. Grahame-Smith is in some good, not to mention lucrative, company.

And some of these works have been fantastic, and some not so much. But each of them, in their own guilty way, have served to dilute the work of Miss Austen over time, and to filter down her tale of class warfare and pre-feminist oppression of women, who were literally reduced to property, in pre-Victorian England. Imitation might be the highest form of flattery, but a 200-year-long game of Telephone can’t help but distort the original message. And bit by bit, fire by fire, the library of Jane Austen is burned to the ground.

You have to hand it to Mr. Grahame-Smith, though. This author has found an incredibly concise way to tie together– and simultaneously condescend to– two disparate audience bases at the same time: chicks and dudes.

Women are meant to prove that they can hang with the guys by being “cool” with zombies invading Pemberton and samurai blades being delicately tucked into white silk garters. How else to demonstrate to their dates that they aren’t being too, shall we say precious, about their beloved story? “Sure, we love Pride and Prejudice, but we’re not, you know, girlie about it.”

And guys? Well, you can’t expect a dude to read a book with nothing in it but words (and pretty girlie words at that. Can’t these Bennet sisters think about anything but marriage? Gosh, you’d think it was the 19th century or something). So how can Mr. Grahame-Smith get the guys onboard? Easy. Guys totally like zombies. It’s a known fact. After all, they watch The Walking Dead. Come on, fellas, we know those penises double as Undead divining rods. Use them to make your way to the theater. (Also, don’t worry, dudes, the graphic novel version is now available.)

Now am I being too harsh on this book, which I suppose may be seen by some as feminist in its own way? After all, it took the original text of Miss Austen:

Bingley: “A woman must have a thorough knowledge of music, singing, drawing, dancing, and the modern languages, to deserve the word [accomplished]; and besides all this, she must possess a certain something in her air and manner of walking, the tone of her voice, her address and expressions, or the word will be but half-deserved.”

And in its place gave us this:

“A woman must have a thorough knowledge of music, singing, drawing, dancing, and the modern languages; she must be well trained in the fighting styles of the Kyoto masters and the modern tactics and weaponry of Europe. And besides all this, she must possess a certain something in her air and manner of walking, the tone of her voice, her address and expressions, or the word will be but half-deserved.”

Certainly, we can all agree, ‘tis better to sing, draw, walk, talk and kick zombie ass in the traditional Kyoto style, than to merely sing, draw, walk and talk without the ass-kicking, right?

Why, this is practically a feminist screed! Try to keep us down with your dated and chauvinist assessments of our feminine virtues while denying us the right to, you know, vote and own property and stuff? Ha ha! Down we will take you with our lightning-fast karate chop of death! Beware, mere mortal, for not only do we rock a tight silhouette in a corset, we also can perform a maneuver with our four equally hot sisters known simply as the Pentagram of Death (real thing: PP&Z Chapter 3). 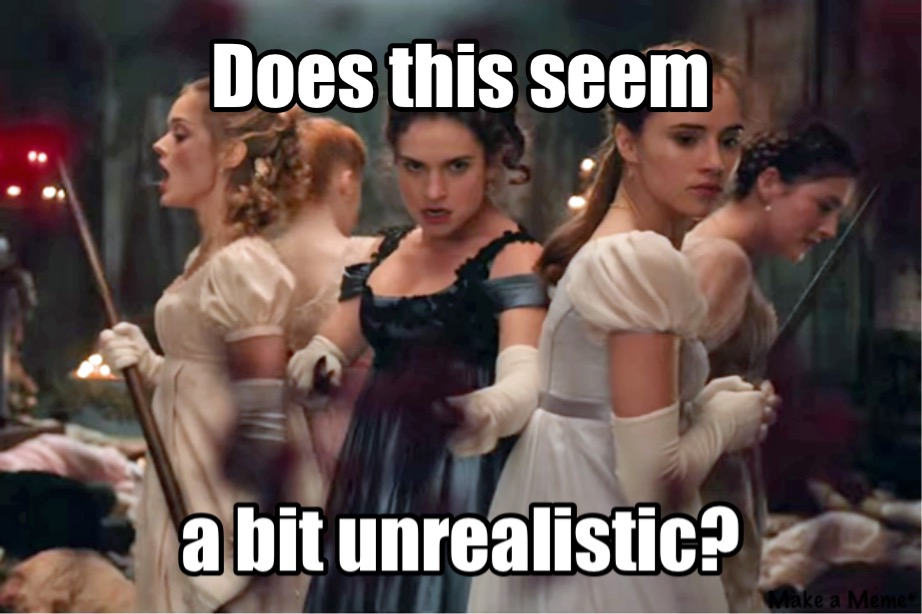 Wait a minute. What the hell am I talking about? That’s ridiculous. This book is ridiculous. And like I said, I can quote every line of Airplane. So ridiculous, in and of itself, isn’t really the problem. So what is the problem? Why can’t I get onboard with Elizabeth Bennet: Zombie Hunter? (True story: the Abraham Lincoln vampire one was written by Mr. Grahame-Smith because this one was such a hit… and, as luck would have it, that Abraham Lincoln story was also public domain. Cha-ching!)

Because I’ve got to tell you, if I believed Mr. Grahame-Smith had written this as true satire– a heightened reality intended to highlight the absurd treatment of women in that age and turn a dated tale into a triumph of female empowerment– I’d be the first in line to buy a ticket. But I don’t believe that that’s what PP&Z is. Not for a second. I think it’s a cash grab with a catchy title, and it just rubs me the wrong way.

Because I feel—truly feel—that the real feminist screed is the one Miss Austen wrote. Her unabashed and gutsy depiction of what it was like to be a woman at a time when women were traded like gold bullion for a man and couldn’t work or inherit property… or blog… is pretty extraordinary. Eye-opening. Terrifying. Frustrating. How many centuries did we live this way? How lucky are we that we were born now and not then? Imagine trying to make it then if you were, say, poor. Or a lesbian. Or—wait a minute, was this a thing then?—not white.

And I guess I’m a bit afraid, and maybe I’m being ridiculous, that if young women and men read Pride and Prejudice and Zombies, or go to see the movie, that they won’t read the real book. And damn it, the real book is good. It’s really good. And we have to read good books while we can. Before some asshole with a Napoleonic complex (and a samurai sword where his divining rod should be) burns the library down. Or, you know, the Internet library.

Maybe we should download this stuff now, just to be safe? You never know when the next zombie apocalypse is coming.

(And seriously, read Pride and Prejudice again. It’s held up well since the eighth grade.)

3 thoughts on “Pride and Prejudice and Zombies (AKA: Get Over Yourself)”