*Spoilers for those who have not read the series.

Shadowhunters: Raising Hell finally exposed what we were all waiting for. 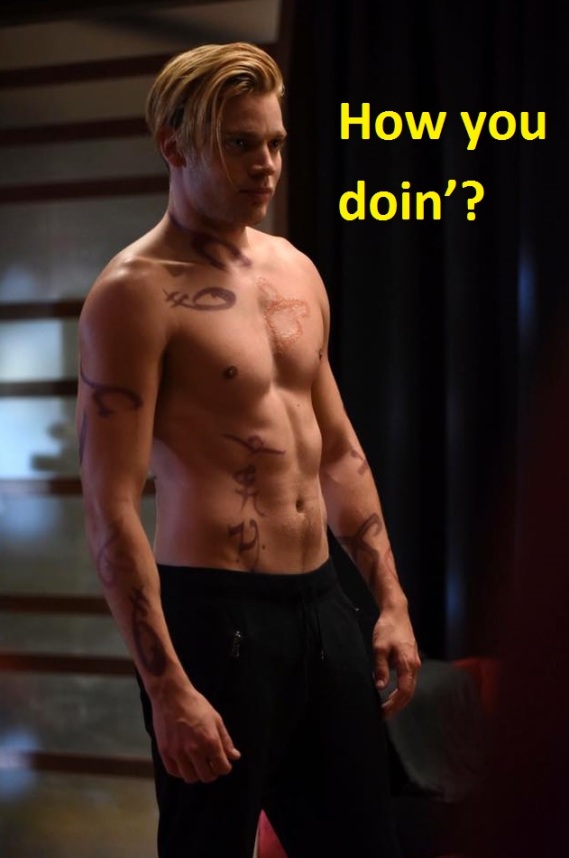 No, not that. Well, yes, we were waiting on that. I’m not gonna say no to more shirtless Dominic Sherwood, but what I really was waiting for was Magnus Bane! Thank you for bringing him back and breathing life into the show. And look – there was a party! Technically a Downworlder rave, which is so 1996, but who’s keeping track of trends? Perhaps Shadowhunters isn’t devoid of budget, which makes the filler of an episode last week even more pointless than Luke’s brief appearance on Raising Hell where he seemed less interested in finding Clary than finding snacks – although I did appreciate the nod to teriyaki.

Let me put episode 3 behind me, far, far behind me, and move forward with what I found to be a pleasantly entertaining hour of TV. I laughed when I was supposed to. I laughed when I wasn’t. But at least I enjoyed myself. What worked for me in Raising Hell was that the writers didn’t try to cram 100 pages of City of Bones in less than 60 minutes because most of the A plot line had already been covered in previous episodes. Of course, things got flopped and flipped as Simon disappeared into the Dumort Hotel last week before the band of beautiful people sought out Magnus, and Clary didn’t really learn anything new in this episode, but what the episode did do was focus on the relationships that tie these characters together. Yes, we love action and fast paced plot, but we have no one to root for if we don’t care about the characters. The heart of Cassandra Clare’s novels is her characters, their emotional bonds, and angst-filled problems.

And, boy, did we have bonds and angst. Parabatai bonds with such intense stares that Clary had to comment on it being “oddly intimate.” I admit, watching Jace and Alec’s deeply penetrating gaze with clasped hands had me in a fit of awkward giggles. At least the show had enough common sense to realize this moment may not play 100% and needed a self-referential comment.

But most of my giggles were of the Shadowhunter fangirl nature as Malec took shape before our eyes. For those of you not obsessed with the show or aware of Hollywood’s most annoying trend of the decades, Malec is the name you get when you mash Magus with Alec. I don’t think this is a spoiler for those of you who watched the show yet haven’t read the books. Shadowhunters spent quality time setting up uncomfortable looks between Alec and Jace, allowing Jace and Alec to fight yet again over trusting Clary, and letting Magnus casually leer at Alec.

Harry Shum, Jr. and Matthew Daddario performed a wonderful balancing act between Magnus’s over-the-top, unfiltered personality and Alec’s understated yet tortured self. Both were a delight to watch in their roles and play off each other. Magnus is an enormous character that Cassandra Clare created, so wildly loved and vibrant that he shows up in all 6 of The Mortal Instrument books, as well as in The Infernal Devices, and has his own collection of stories called The Bane Chronicles. Fans LOVE Magnus. 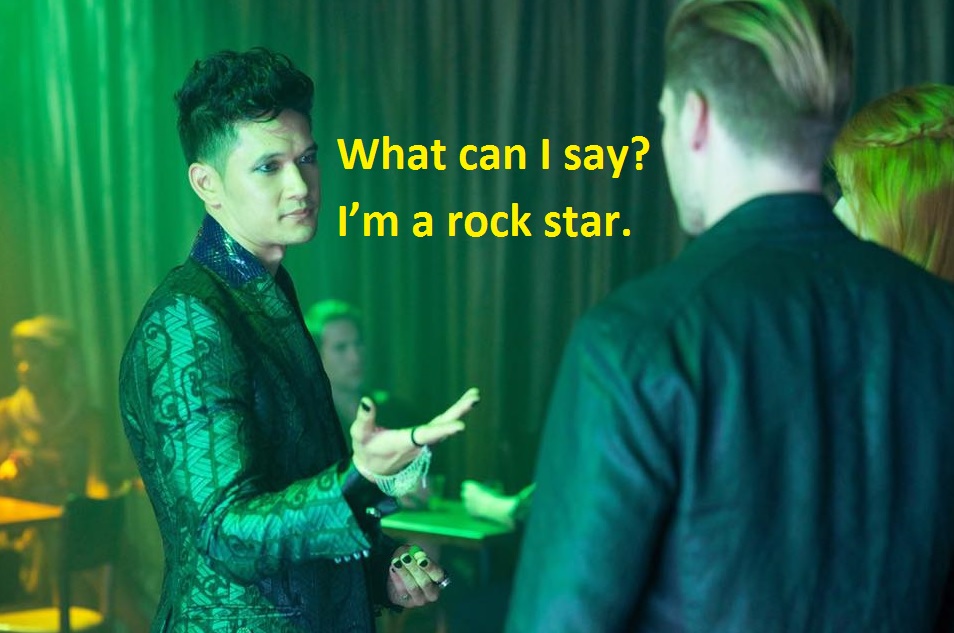 He’s everything you wish you were: charismatic, flamboyant, fun, powerful, honest, unabashed, fiercely loyal, and magical. Magnus is almost too extraordinary to bring to life on a screen, but Shum, Jr. gave a wonderful performance that was a mix of grandeur and coy expressions.

Daddario’s character has one of the most heart-wrenching story arcs of the series. Yes, Clary must find her mom. Yes, Simon will turn into a Downworlder and have to grapple with politely drinking blood from glassware. Yes, Jace’s whole past is a lie and he has no clue who he really is. All interesting stuff, but Alec’s eventual acceptance of his homosexuality and coming out to his parents are true journeys that thousands of readers/viewers can relate to. City of Bones was published in 2007, well before America’s monumental decision to legalize gay marriage. The mentality in the world of Shadowhunters towards homosexuality was that you are basically less a man, less a woman, less a Shadowhunter. Like many parts of our own world it is not accepted, thus making Alec and Magnus’s relationship all the more powerful.

I do believe we will look back 50 years from now and see the struggles of the LGBTQ community as the civil rights movement of our generation. Hopefully, America will be accepting of gay marriage and families and not balk when two lesbian moms show up at Back to School Night any more than not taking a second look when an African American woman sits down on the bus next to you. I don’t expect the struggle to be over. Unfortunately, we still battle racism in our country from the streets of Ferguson up to the Oscars. But having more gay couples on TV, more interracial relationships in films, more ethnicities cast in general all will help in changing our culture. When writers like Cassandra Clare make a choice to highlight important issues in our society, it humanizes the experience to readers who may not understand what it is like to be a young male teen afraid to open up to his family and friends. Thank you, Cassandra.

Many fans were waiting for this important relationship to start. And what a treat it was to watch it begin. Magnus put Jace in his place, singling out Alec as the handsome leader. This was a different spin from the novel, but equally enjoyable. Maybe more so as we got to watch Matthew Daddario nearly blush on screen.

In the novel Magnus’s attraction to Alec comes as a surprise to readers as the first mention is when he is tossing the Shadowhunters from his loft:

“What welcome?” Magnus asked. “I’d say it was a pleasure to meet you, but it wasn’t. Not that you aren’t all fairly charming, and as for you-” He dropped a glittery wink at Alex, who looked astounded. “Call me?”

However, in this week’s episode Magnus was checking out Alec every second he could, and there was no surprise to viewers that he found Alec attractive. (But, seriously, who wouldn’t?)

I practically cheered over the subtle slow-mo shot of Alec flipping his seraph blade while Magnus said, “Who are you?” This is an example of deviating from the novel for the sake of the show and making it work. I’d much rather keep the comedic tone and carefree attitude of Magnus intact than stay 100% faithful to the novel. Give me more comedy. Give me more Magnus. Give me more Alec.

Another change from the novel that worked in this episode was Alec and Jace fighting over Clary’s intentions and using the image of Jace being Alec’s love in the memory demon pentagram to reveal Alec’s feelings about his parabatai. In the novel it is Clary who outs him:

She could see how she was hurting him, and it made her glad. Someone else ought to be in pain for a change. “You can rant all you want about honor and honesty and how mundanes don’t have any of either, but if you were honest, you’d admit this tantrum is just because you’re in love with him. It doesn’t have anything to do with-“

Alec moved, blindingly fast. A sharp crack resounded through her head. He had shoved her against the wall so hard that the back of her skull had struck the wood paneling. His face was inches from hers, eyes huge and black. “Don’t you ever,” he whispered, mouth a blanched line, “ever, say anything like that to him or I’ll kill you. I swear on the Angel, I’ll kill you.”

Since the show has rushed through City of Bones like a vampire with a pack of werewolves on its trail, there has been no time to set up Clary having a clue that Alec has deeper feelings for his parabatai than Jace can imagine. It was the wise choice not to force this revelation on Clary’s character but show it visually along with the groundwork laid down by little sis Izzy.

Speaking of Izzy, I typically love when TV writers lift dialogue straight from the book, but they could’ve dropped her line about Clary being flat chested. Katherine McNamara practically busted out of that dress, which made Isabelle’s comment feel vindictive vs. a glib observation. And I’m ready for Isabelle to be more than a teen girl fascinated with clothing, jewelry, and boys. Please give Emeraude Toubia more to do with the character. Isabelle is a strong, independent, dynamic character. Write her that way! 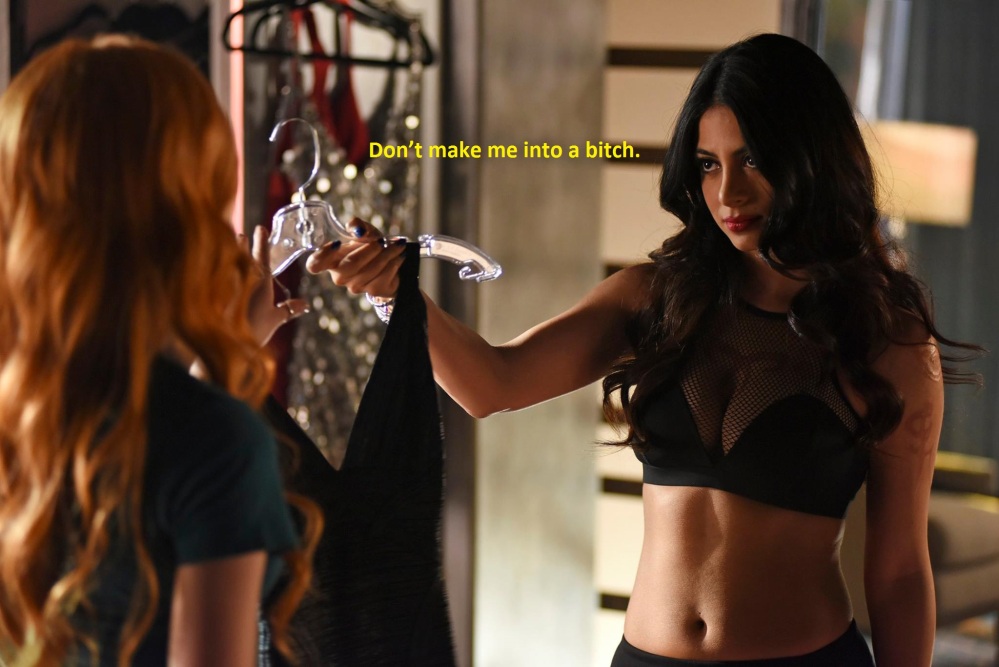 Viewers were treated to nods to the series: Isabelle’s necklace, Tessa Gray’s name dropped, Izzy dismissing poetry slams. My husband was treated to Emeraude Toubia. See pic above. We were all treated to Clary quoting Star Wars: “You’re my only hope.” Oddly this is not the first hidden reference to sci-fi/fantasy epics. Descent into Hell had Jace practically quoting Galadriel about light being found in even the darkest of spaces. Do I feel a drinking game coming on?

We also got to don our HazMat suits and travel to Chernobyl where Valentine murdered invisible Seelie spies by having a minion breathe noxious fumes on them. Perhaps this is a side effect of the radiation poisoning? Maybe Chernobyl isn’t devoid of life? Maybe everyone is just invisible? 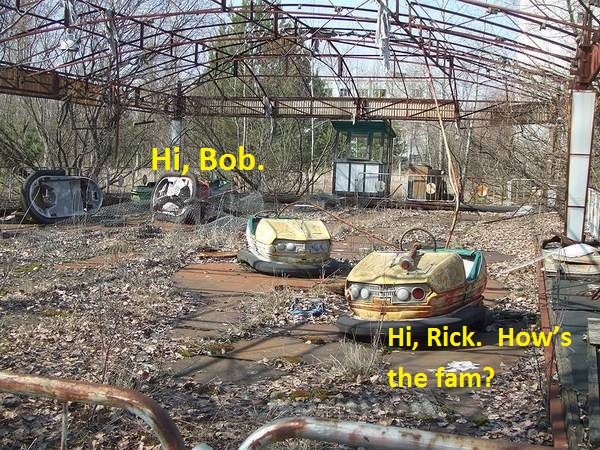 I really wish the writers room of Shadownhunters had stuck to Cassandra Clare’s novel and not introduced Valentine so early. They should gone Voldemort with him. There is something menacing and disarming about a villain you don’t know much about, can’t see, but is lurking in the shadows biding his time. Instead, Valentine is portrayed as a grown bully hiding away in his lair of radioactive material. 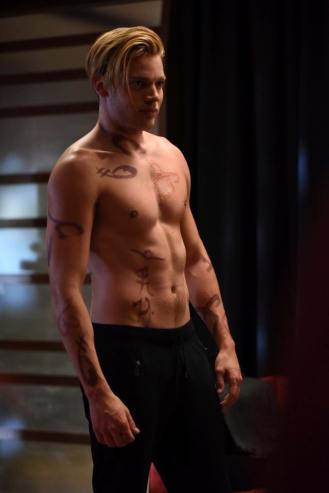