This article is about Disney princess movies. Before we get started, if your first thought is: “I would never let my kids watch those movies,” I would like to ask you a question: Do you actually have kids?

No—I laugh in your face. Yes—Good for you. But your kids still know the stories. Trust me. 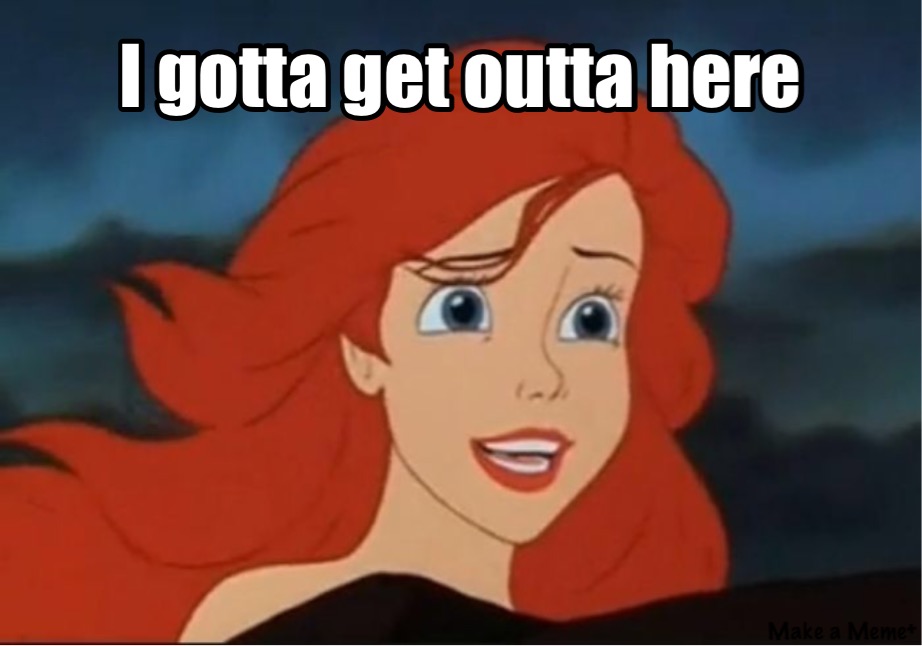 They break the movies down into three time categories: the old-school movies from the ‘50s where the ladies just sat around being abused and waiting for a man to save them; the “New Renaissance” movies of the ‘90s where “spunky” heroines stood up to authority and stood out from the pack… and then waited for a man to marry them; and the new-wave films of the last few years, including Tangled and Brave, where feminist heroines took care of themselves and the man was an afterthought.

It’s like a 60-year-long game of Shag, Marry, Kill, but in the Disney version, it’s “Save me, Marry me, Leave me alone.” (Come to think of it, sounds like a pretty typical marriage.)

The problem, the researchers argue, is that even as the storylines have gotten more and more feminist over the years, the women have had less and less to say, with the vast majority of dialogue going to men (or, you know, fish. But fish voiced by men).

And why does this happen? Well, for one thing, as they correctly point out, there simply aren’t that many female characters in these things. There’s the heroine, or in the case of Frozen, two heroines—a rare event that in my mind is why this movie took off more than any of the others. (Namely, girls– and in many cases, boys– could finally act out a Disney movie where they could BOTH play the princess instead of having to take turns.) And sometimes there’s the villain, who is often a “false mother” figure, since, as we all know about Disney movies, the real mother is probably dead.

In fact, the false mother, or real mother in some movies, is a very common Disney antagonist– she exists to place doubt in the protagonist’s mind, to keep the young heroine “in her place.” She is an obstacle that must be overcome.

Other than that, who else is female in these latter-day movies?

Let’s take a look at them, shall we?

Speaking parts (more than one line) of women in Disney princess movies since the ‘90s:

*Elsa is NOT the villain of Frozen. Hans is.

Well, shoot. These researchers are on to something here. Where the ladies at?

Here’s the part where I think the researchers went off-track, and I think classic story structure can teach us some things about why. Their theory: It simply doesn’t occur to the writers to make other secondary characters female. “Need a shopkeeper? Man. Need a guard? Man.”

Baloney, I say. The people who write these movies are the best in the business. They know EXACTLY what they’re doing. So why is there only one active female (other than the occasional villain, who is the ANTITHESIS of the protagonist) in these movies?

Let me answer that question with a scenario:

A lovely town center, 1800s. The townspeople prepare for their day. Shopkeepers fling open their windows and doors. Vendors set up their wares. The fountain gurgles. Everybody sings:

And here comes BELLE, who is indeed very pretty. But she doesn’t quite fit in with these others. Belle has a book under her arm and a faraway look in her eye.

I DON’T FIT IN HERE

THESE PEOPLE ARE BORING

I WANT TO MOVE AWAY

And now along comes ETHEL, Belle’s best friend. Ethel is also a comely young woman, carrying a book under her arm.

Good morning, Belle. Where are you going?

To the bookstore to get a really interesting book you wouldn’t understand.

Oh, but I would understand it. I, too, like to read books about faraway places and dream of more than this provincial life.

Neither do I. Come to think of it, Susie doesn’t really like it here, either. Maybe we could start a book club, or move to Paris and get an apartment together?

I couldn’t do that, because I’m just a loner. Oh, no. Here comes Gaston. He’s always asking me to marry him because I’m the prettiest girl in town. 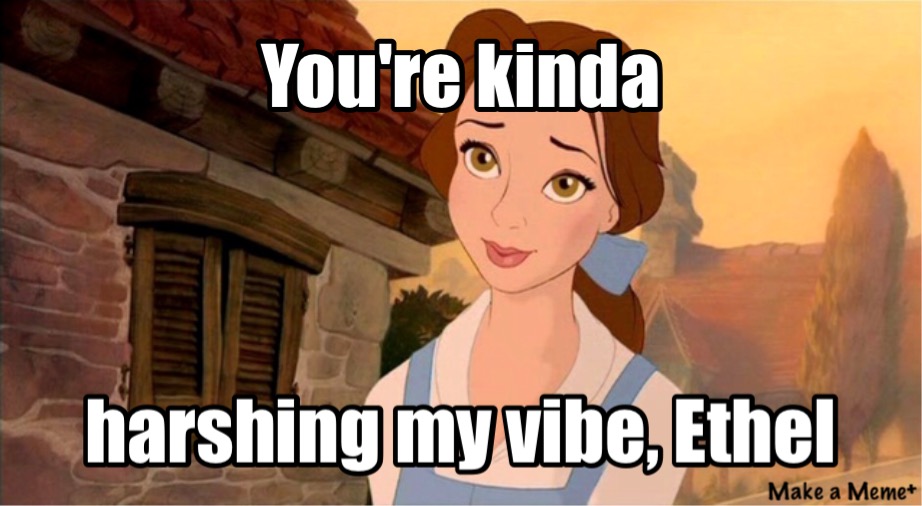 Okay, I could do this all day, but I think you’re probably getting the hang of it.

Now I have two young kids, five and three, and yes, they watch Disney movies. They’ve seen every one. From Snow White to Cinderella; The Little Mermaid to Beauty and the Beast; Tangled to—(deep sigh, let it go)—Frozen. Oh my God, have they watched Frozen. Not the five-year-old girl, so much, who was just four when it came out and has never really cared for it too much. But my son, who was 18 months old at the time and has just turned three, is obsessed with Frozen, and specifically with Elsa, in a way that absolutely terrifies me.

I could post a video here of his first words, which weren’t words; they were him phonetically singing Let It Go before he even understood what the lyrics meant. But I won’t do that to you. I could post hours of subsequent videos of him performing the song and running around in an Elsa dress taken from his sister’s closet. But I won’t make you watch that, either.

And, not that there’s anything wrong with that, but, yes, my husband and I have wondered from time to time if our three-year-old is trying to come out of the closet. Or at least, we used to wonder that, until a video of a dad who let his toddler dress as Elsa went viral, and the comments section flooded with other dads saying that they, too, let their sons run around in an Elsa dress singing Let It Go.

Why do our sons do this? Because the Disney princess is on the classic hero’s journey (see Campbell, Joseph) and it has absolutely nothing to do with gender.

It has to do with the isolation of childhood.

All children feel they’re in a tower, separated from some unknown– but definitely cool– world in which they would totally fit in and everyone would get them. All children feel they’re being kept from that world by the walls of this tower—walls that they will some day scale. And what are those walls made up of? Adults. Parents. Us. Me. I am the wall. I am my children’s wall.

In Disney movies, “children” are represented by the female lead, and “adults who don’t get it” are men. It’s why they kill off the moms in Disney movies (well, the nice moms, anyway). Because moms are traditionally nurturing and kind, and Disney princesses don’t have anyone to treat them that way.

And there can’t be a whole bunch of other “children” (read: girls) locked in that tower with them, either commiserating with their plight or offering direct competition for their goals and dreams. Because, well, then they really wouldn’t be that special, would they?

So the Disney writers, who aren’t idiots, put their protagonists in a tower—either literally (Rapunzel, Cinderella), or figuratively, by putting them in an enclosed and claustrophobic setting in which no one understands them (Ariel, Belle, Jasmine, Elsa), except maybe the sidekick who empathizes with their plight, but is powerless to do anything about it (and who is almost always voiced by a man).

So how does Frozen get away with having two princesses? Well, it’s a pretty neat balancing act. But mostly, the only reason it works is that Anna and Elsa do not have the same goal, and therefore are not in competition with each other. Anna doesn’t want to live in the ice tower; Elsa doesn’t want to fall in love. They also don’t have a whole lot of screen time together, setting up two parallel “I want to get the hell out of here” stories, rather than one story with two competing protagonists.

In a way, the Disney princess narrative is all of our stories, or rather, the way we see ourselves: a lone star, waiting to shine. Sure, there are other stars in the sky. But this is our story, damn it. And some day, someone will get us. Someone will really understand us, pluck us from obscurity, and let us know how special we are. But that someone won’t be Ethel. It will be Prince Charming.

And be sure to “like” our Facebook page for more on your favorite movies and TV shows: Novel2Screen

3 thoughts on “The Disney Princess Problem”