(Spoiler Alert!!  There are probably spoilers below for those who haven’t read the novels.)

Where the hell is Magus Bane?!

I’m sorry, was that audible? Let me try a more dignified approach to this review.

Dead Man’s Party is the episode where everyone gets it on. (Bow chicka bow bow)

Everyone outside of Alec. Lucky him. He just gets annoying quips from his little sister about pent up desires.

Isabelle spends too much of the episode in Meliorn’s gypsy tent of sheets blowing in the wind. (Not that my husband minded. I’m pretty sure he puts up with Shadowhunters not to support my geeky self but because of Emeraude Toubia) Simon, who apparently has some pretty sharp teeth for not being a vampire, spends an excruciating amount of time necking with Camille. (I almost drew blood slicing my wrists at this sequence.) And Jace teaches Clary how to wield a seraph blade with an overt metaphor about her accepting her ability to control long, pointy objects like any woman should – I mean, Shadowhunter.

Right when I thought Shadowhunters was saving us from the despair that was the pilot, they throw episode three at us. Once again covering a sweeping 100 pages of Cassandra Clare’s City of Bones in a single episode. Granted, of those 100 pages almost none actually took place on screen Tuesday night. No Magnus Bane. No Downworld party. No Simon turning into a furry rat. No werewolves.

I knew there would come a time in this blog when I’d have to write about production value. I just didn’t think it would be so early. This whole episode can be summarized in one word: budget.

Sometimes changes are made from novel to script to screen due to creative differences. Emma Thompson slashed a good portion of Sense and Sensibility from her script, and in doing so made for a more compelling, emotional story on screen. I could write a whole blog on it and how I fell in love with Alan Rickman as he leaned against the wall saying, “Give me an occupation, Miss. Dashwood, or I shall run mad.” (Oh, Alan, you will be missed!)

However, more often than not novels are condensed and scenes re-envisioned due to money. Dead Man’s Party (which had no party, btw) felt like Jace’s weapons belt tightened uncomfortably around the producers’ budget. In the novel Magnus Bane’s party is a ton of fun – and the first time we meet the High Warlock of Brooklyn. But a large party means extras. Extras in fantastical make-up. Extras cost money. There’s a horrible saying in production the captures the mentality towards extras: They’re props you have to feed. Compared to the novel, having Raphael and only one extra kidnap Simon saves production a ton of money.

No extras to feed and costume and put in make-up. No fancy party to set decorate. Just the cost of permits and security for shooting in a nondescript, outdoor location.

And if you’re pinching pennies for a party, you may not want to invest in CGI to turn Simon into a rat. We missed this great moment from the novel:

The rat squeaked and started to thrash wildly in the boy’s grip. He looked down at the captive rodent with an expression of distaste. “Man, I thought he was Zeke. I wondered why he was coping such an attitude.” He shook his head, dreadlocks bouncing. “I say she can have him, dude. He’s already bitten me five times.”

Cassandra Clare’s comedy is so entwined with her characters, it is brilliant.

Also, Alberto Rosende is great, so why waste him as a rat. Then again, he was totally wasted in this episode sucking face with Camille, which is NOT in the novel. So, Camille sires Simon? Is that what they are leading us to believe?   In my opinion there was way too much time spent in this episode on characters trying to be seductive or sexually manipulative. Pretty sure I fell asleep on the third cut to Camille and Simon kissing for no reason. When she wasn’t kissing Simon, Camille stomped around her hotel room barking the same orders and observations in each scene. The audience isn’t dumb. We got it the first time – she knows the Shadowhunters are coming. Come on, folks, you’re wasting precious page space repeating yourself. 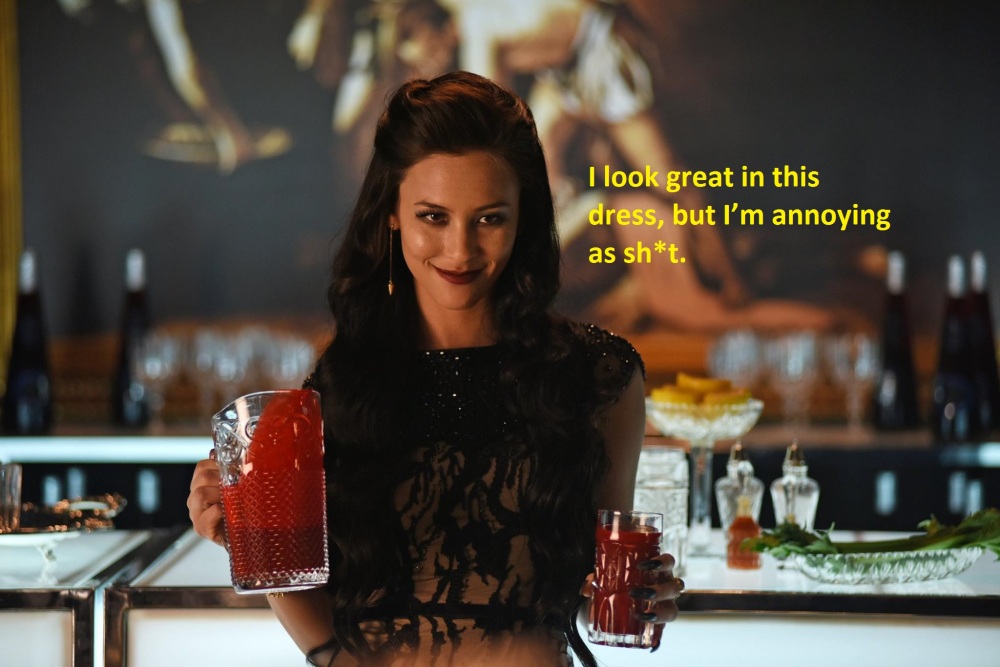 Meliorn’s tent and the graveyard also felt like ways to trim the budget. Just dress a bed, hang some sheets, and you have a fairy pad that reminded me of my childhood when I would drag clean sheets through the dirt and tack them to the huge beech tree in my yard, creating the most awesomest forts in the world, if I do say so myself. This was another sequence that felt dragged out. Of course all the males watching probably disagree with me there.

As far as the graveyard versus locating the hidden supply of weapons in a church, I’m not opposed to the change probably due to the macabre side of me that finds graveyards fascinating and eerie. But securing a church and desecrating the altar has to be harder for production than securing a graveyard setting. We didn’t get Jace and Clary’s philosophical discussion on God, if God even exists or simply is apathetic to the plight of humans. It’s an interesting moment in the book and, in my opinion, provides more insight into Jace, whose entire culture is centered on the belief they are half angels, than the on-the-nose discussion with Clary about him never being in love.

Of course, including the God debate opens up a can of worms for the creators of the show. No, not because of the polarizing nature of the topic. Because in that moment Jace says, “Either way, we’re on our own.” One of the themes of City of Bones and the whole Mortal Instruments series. But in the show, they aren’t alone. The Institute is crawling with Shadowhunters, which still leaves me scratching me head as to why Clary hasn’t grabbed one of the adults and demanded better help in saving her mom. Now that we understand how impactful the budget can be on an adaptation, we don’t need to waste it on Shadowhunter extras. Give me Magus Bane and his party of Downworlders. Pretty sure these Institutors, as I’m gonna call them, is the crew on their own Ipads, and I think I saw one scrolling Facebook….

And where is the huge werewolf/vampire/Shadowhunter showdown at the Dumort? Budget cut. Odd, last time we saw Luke he swore he’d find Clary and no one knows her better, yet he’s a detective who hasn’t made much progress. Just sayin’.

Budget wasn’t the only issue with this episode. I can forgive budget constraints for awesome writing and directing. However, there were no stakes in this episode. Not once did I feel like Simon was in any real threat. Granted, I’ve read the books, so I know the outcome. But he was more in threat of contracting an STD than being slaughtered by vampires. Camille was so into him as a plaything, never once did I think she had any intention of killing him. In my opinion, it would’ve been better to leave him with Raphael, not introduce Camille yet, per the book, and have Simon do what he does best – piss the hell off of Raphael by just being Simon.

In the novel, the threat to Simon was clear and extreme:

“Not necessarily,” said Magnus hastily. “They might have thought he was one of their own.”

“In which case, what’ll happen to him?” Clary said.

“Well, when he turns back into a human, they’ll still kill him. But you might have a few more hours.”

“Then you have to help us,” Clary said to the warlock. “Otherwise Simon will die.”

That urgency, although stated in dialogue by the characters in the show, wasn’t there due to the unnecessary Camille make out session. 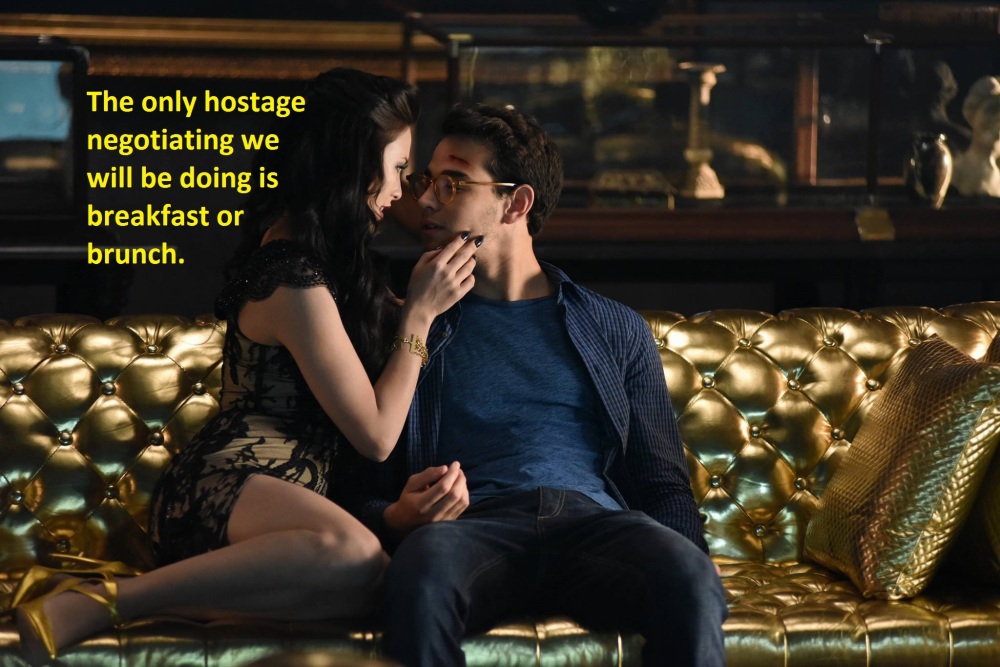 I also found the act outs (breaking for commercials) askew. Isabelle and Alec take down a number of vampires before we leave them hanging to take a commercial break. Since we’ve already been shown they can handle the situation, there’s no threat to this pair. No imminent danger. Again, just my opinion, but I think audiences at home would’ve been on the edge of their seat if the show cut BEFORE the pair had already taken down half the coven on their trail.

Not everything with Dead Man’s Party was D.O.A. So, in hopes of a better week next week, here are three items I did like from the episode:

5 thoughts on “Shadowhunters: Putting the PG in PG-13”