Buried somewhere within the 950 or so pages of Dragonfly in Amber, the second book in the Outlander series, is an epic 400 page novel about loss, devotion, redemption, and the extraordinary power of the human mind to heal. Unfortunately, the other 500 pages were some of the most stultifying and boring hours of my life.

So, the question before us, Outlander peeps, is what exactly will Ronald D. Moore, genius though he may be, do to entertain us with the second season of Outlander, which picks up where the first book (and the first season) left off—namely, after Jamie’s vicious rape and torture at the hands of his archrival Jack Randall, his rescue by his loving wife Claire, and their voyage by sea to 18th century Paris (think Mozart wigs)?

Reading Dragonfly—or as I lovingly call it, “900 Pages in Search of an Editor”– can feel a bit like torture in and of itself. Desperately long passages filled with Claire literally sitting in her room feeling bored have been known to make at least one reader abandon ship before anything ever happens (seriously, read the Amazon reviews). But somewhere around the midpoint, after dozens of instances of our heroes reading mind-numbingly boring letters from the exiled Bonny Prince Charles, followed inevitably by a few dozen pages of Jamie and Claire discussing said letters, our loving and ridiculously good-looking couple make their way back to Scotland, where Outlander is supposed to be, damn it!

At this point, for the most part, Dragonfly picks up considerably. But man, you gotta work hard to get here at all.

So how did Dragonfly go off the rails? And why? Well, to a large extent, the problem comes down to Writing 101 (you know, the one you usually slept through in college because it was at 8:00 AM. No judgement). And it’s a problem often found in sequels, be they movies, books, what have you. Namely, the B story was resolved at the end of the first book.

In any good book or movie, you have your A story—in the case of Outlander, a woman goes through a rock portal in 1945 and ends up transported to 1743, where she must fight for her life to get back to her husband in the future; and then you have your B story. The B story is usually the love story, and it’s the heart and pulse of why we’re reading the damn book in the first place. Because the B story is the metaphor for the emotional arc of the hero. The B story is where the hero’s heart opens, where she learns a necessary life lesson, where she changes! Nobody ever summed this up better than the late great screenwriting teacher Blake Snyder, who said the following:

Every story is “The Caterpillar and the Butterfly.”

We start with a caterpillar living among the tall branches, eating green leaves, waving “hi!” to his caterpillar pals, little knowing that his is a life of profound deficiency. And then one day, an odd feeling comes over him that’s so scary, it’s like a freefall. Something strange is happening. And that something… is death. That’s what the cocoon stage is. As caterpillar becomes chrysalis, he dies. He, and everything he knows, is no more. Can you imagine? But when it seems like this purgatory will never end, when things look blackest, there’s another stirring: our hero sees light, and now he breaks through a weak spot in his prison, to sunlight… and freedom. And what emerges is something he never dreamed of when this all began, something… amazing.

-Blake Snyder, Save the Cat Strikes Back

Isn’t that beautiful? God, I miss that dude. The B story in Outlander, of course, is the love story with Jamie, and Claire’s ultimate decision to abandon her plans to return to the future to be with her husband Frank, and instead commit to living out the rest of her days in the 1700s with her new husband Jamie. Why does she do this? Well, for one thing, Jamie looks like Sam  Heughan.

(For the love of all that is…) But that’s not important right now. She does this because he is her heart and her blood and her true soul mate—her home.

And Claire, although she didn’t know it at the time, was living a life of “profound deficiency” before she went through the portal. A nomadic childhood as an orphan, raised by an explorer uncle; a young marriage to a man she never really got to know as WWII tore them apart; and her years as a triage nurse during the war, during which she experienced horrors of the human flesh that never left her—Claire is lost, longing for a home she has never known. And that home, it turns out, can only be found by this journey towards love and acceptance in the Highlands of Scotland, something she never would have learned about herself had it not been for the A story.

By the end of Outlander book one, Claire’s emotional arc is complete as she finds the strength to rescue Jamie from Jack Randall and heals him of the horrible pain that has been inflicted upon him. They are together and they are strong, their union sealed. Now, obviously, marriages are long and filled with turmoil, and eventually Jamie and Claire will have even more obstacles to overcome. But we enter book two with no B story.

We’re given a preamble in which we learn—spoiler alert—that Jamie died in the battle at Culloden and Claire, pregnant with their child, somehow ended up coming back to the future. But we don’t know how that happened. So we plunge, after a rather lengthy and, sorry, not terribly interesting beginning, into Claire’s memories, and the story picks up in earnest there. And this is where we have about 400 pages—count ‘em, folks—sans B story. Sure, there’s an A story. Claire and Jamie are going to stop the Jacobites from gathering enough money to support the Bonny Prince Charles’s attempts to reclaim all of England, Ireland and Scotland. Um, good luck with that, Jamie and Claire… and Charles… and all the other people from history I’m not terribly familiar with because of my American education which really never got around to any of this stuff so I’m learning as I go here.

So why is this so boring? Is it because nothing really happens? Well, yes, that’s certainly part of it. Claire, pregnant with their first child Faith—again, sorry for the total Debbie Downer spoiler alert, but Faith will be stillborn around a third of the way through the book—and confined by the social mores of the time which didn’t really allow pregnant women to do anything, sits around and waits for Jamie to come home from work. Seriously, if I wanted to know what bored pregnant women do when they can’t work and their husbands are out of the house, I’d read my diary from 2010… and 2012. You get the idea.

So finally, after a long, and I mean loooong time, Claire decides to get a job! She goes to work at the local hospital treating sick people. Cool, you think, concealing a delicate yawn, now the story’s going to catch fire! Let’s see… working at the hospital… nuns… sick people… walking home… waiting for Jamie… doo doo doo, wasn’t there a lot of sex in the first book? Like, really hot sex? Why isn’t there any… oh shit, a rape! Some girl just got raped. Not to worry. It wasn’t anyone we cared about too much. Nor will we ever really see her again… till much later, anyway. So that happened. La dee dah, dinner party. Ooh, Jamie hit a guy. That’s kind of like drama, right? God, why is this so boring? Is it possible that Diana Gabaldon just isn’t that great of a writer?

Nope. That’s not it at all. After all, this is the author who gave us the following passage in Outlander book one, when Claire is debating her choice of returning to Frank or staying with Jamie:

But bound by the limits of time and flesh, I could not keep them both. Beyond, perhaps? Was there a place where time no longer existed, or where it stopped? Anselm thought so. A place where all things were possible. And none were necessary.

And was there love there? Beyond the limits of flesh and time, was all love possible? Was it necessary?

The voice of my thoughts seemed to be Uncle Lamb’s. My family, and all I knew of love as a child. A man who had never spoken love to me, who had never needed to, for I knew he loved me, as surely as I knew I lived. For where all love is, the speaking is unnecessary. It is all. It is undying. And it is enough.

That’s some beautiful writing right there. So the problem, we must realize, is not that Miss Gabaldon doesn’t know what she’s doing.

It’s boring because drama in books doesn’t come from “exciting” things happening. It comes from the inner and innate conflict between the A story—what the character must do—and the B story—the life lesson the character must learn. And the conflict doesn’t get resolved until the end of the story, when the character takes what she learned in the B story and uses it to solve the puzzle of the A story. No matter how many rapes and sword duels you put in a book or TV show, I’m going to be bored if there’s no big life lesson the character must learn. And at the beginning of Dragonfly, Claire has already learned that lesson… in the form of one of the most physically perfect Scottish redheads to ever walk the earth.

By the midpoint, the drama starts to get a little more compelling. Why? Is it because Jamie and Claire are forced out into battle, joining forces with Prince Charles who, by poor luck (or malchance, if you will), found the money to wage war in Scotland? No, not really. It’s because after the death of Faith, which Claire blamed on Jamie, our couple finally had some life lessons they needed to learn again. And we finally had a reason to care about them. But seriously, we’re talking like page 600 when this happens.

So what will Ronald D. Moore do to solve this problem? Well, if you’re like me, you can’t wait to find out. (Seriously, though, Sam Heughan is going to be shirtless a lot in this, right?) 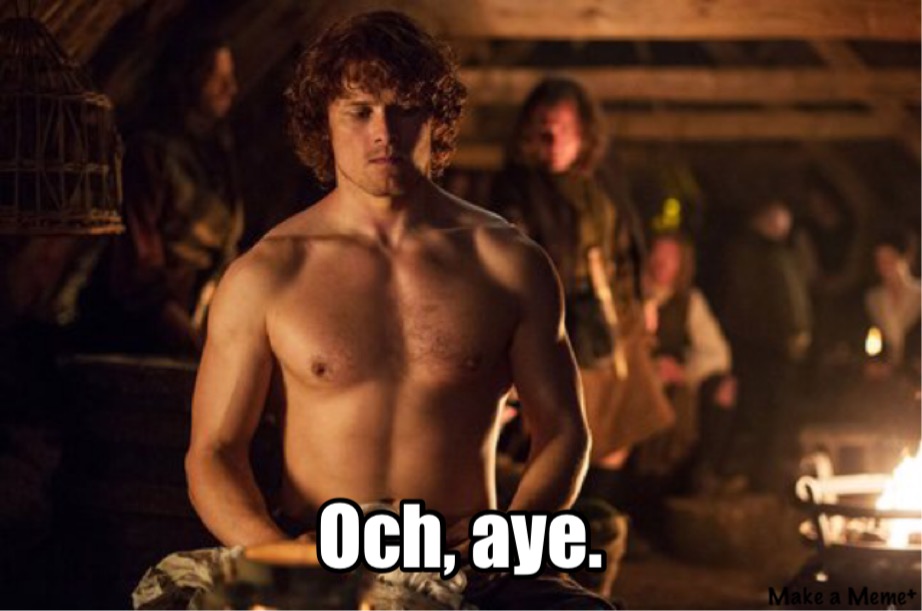 4 thoughts on “Outlander Season 2: A “B” Story Problem”